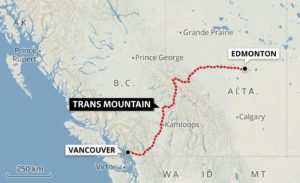 The Canadian government has elected not to challenge a court decision that put the brakes on the $7.4 billion Trans Mountain Pipeline expansion project.

Instead, Ottawa said Wednesday it will resume consultations with Indigenous groups that will be affected by the project.

The announcement comes just weeks after a Federal Court of Appeal quashed the approval of the project on the basis that Canada’s efforts to meaningfully consult with indigenous people fell short.

When the ruling was announced, the court also criticized the lack of attention given to how increased tanker traffic off the cost of British Columbia would affect the resident killer whale population.

“We are going to do things differently this time,’’ said Canadian Natural Resources Minister Amarjeet Sohi.

First, government representatives on the ground will have a clear mandate to conduct meaningful consultations and be empowered to discuss reasonable accommodations with Indigenous groups on the issues that are important to them.

Second, Sohi said Ottawa is going to work with First Nations and Metis communities to seek their views on how to get Phase 111 [of the process] right.

Third, Ottawa will more than double the capacity of the consultations teams, with expertise from across and outside Government.

Supreme Court of Canada Justice Frank Iacobucci has been appointed to design and oversee the consultation process.

These initiatives follow the recent decision by the Federal Government to instruct the National Energy Board to review the Trans Mountain pipeline expansion to consider the project’s impact on the marine environment. The federal regulator will have 22 weeks to hear from Canadians and report back to government.

Sohi said the latest announcement is tangible evidence that Ottawa is willing to negotiate with Indigenous groups in a bid to move the project forward.

“But it must move forward in the right way,” he said.

The original Trans Mountain Pipeline was built in 1953 and continues to operate today. The proposed expansion is essentially a twinning of the existing 1,150-kilometre pipeline between Edmonton, Alberta and tidewater at Burnaby, British Columbia.

Critics also said the latest Trans Mountain announcement highlights the difference between the $40 billion liquefied natural gas that also involves the construction of a pipeline but appears to be going ahead in British Columbia with relatively little opposition from Indigenous groups.

Analysts say this is because the LNG Canada partners got it right when it came to the business of holding proper consultations with Indigenous groups.

The five partners in LNG Canada have all made an investment decision that kickstarts a liquefied natural gas project that is expected to rank as the largest private sector investment in Canadian history.

LNG Canada is a joint venture comprised of Shell Canada Energy (50%), an affiliate of Royal Dutch Shell Plc, and affiliates PetroChina (20%), Korea Gas Corp. (15%) and Mitsubishi Corp. (15%). The joint venture is proposing to build an LNG export facility in the B.C. coastal city of Kitimat that would initially consist of two LNG processing units referred to as “trains,” each with the capacity to produce at least 6.5 mtpa of LNG annually.

The key project components are the LNG export facility in Kitimat and 670-kilometre pipeline that will transport natural gas to the coast from northeastern B.C. The pipeline will be built by TransCanada Corp. [TRP-TSX], at a cost of $6.2 billion.

The project aims to ship natural gas in liquefied form to markets in Asia and would include an option to expand in the future to four trains.