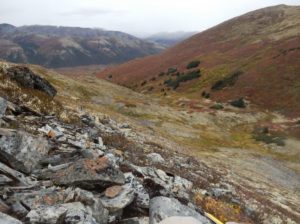 Stratabound Minerals Corp. [TSXV: SB] is pleased to announce the initial results from the first diamond drill program on Golden Culvert, located in the Hyland-Selwyn gold belt in the eastern Yukon Territory.  A series of 8 diamond drill holes were drilled, denoted as GC1801 through GC1808.  Complete assay results have been returned to date for only holes GC1801, GC1803 and GC1804.  This press release addresses those holes exclusively.  Diamond drill results herein are reported down the hole and are not represented here as true widths.

Located 350 metres southeast of the discovery outcrop, drill hole GC1803 intercepted 2.53 gpt Au over 33.1 metres of quartz breccia, veining and sulphides between 111.5 and 144.6 metres down the hole.  The intercept includes 60.1 gpt Au over 0.9 metre within a quartz vein that averages 26.04 gpt Au over 2.5 metres overall.  The quartz vein is interpreted from surface mapping and trenching to be the 350 metre strike extension of the Main Vein discovered in 2008 which reported historic chip samples between 7.7 to 22.8 gpt gold over 1 metre true width and gold-bearing wallrock grading up to 2.27 gpt Au over 0.5 metre true width.   Photographs of the core and an updated corporate presentation will be posted on the Company’s website at www.stratabound.com.

The high grade Main Vein Zone of breccia and mineralization intercepted in GC1803 project to surface from 110-130 metres below and lie directly under the higher grade portion of one of the greater than 200 ppb gold-in-soil anomalies.  Trench TR1805 which intercepted 1.43 gpt Au over 12.0 metres including 4.23 gpt Au over 3.0 metres in a quartz vein that extends from the Main Vein a further 80 metres southeast along strike. (Stratabound press release of August 23, 2018).

The Main Vein Zone to date has therefore been traced with continuous gold mineralization appearing to extend along 450 metres of strike length, to 130 metres depth below surface and remaining open along strike and at depth.

Drill hole GC1801 was terminated early at 19.8 metres after intersecting a fault, and returned no significant values.

All holes for which full assays have been returned to date are listed in Table 1 below. 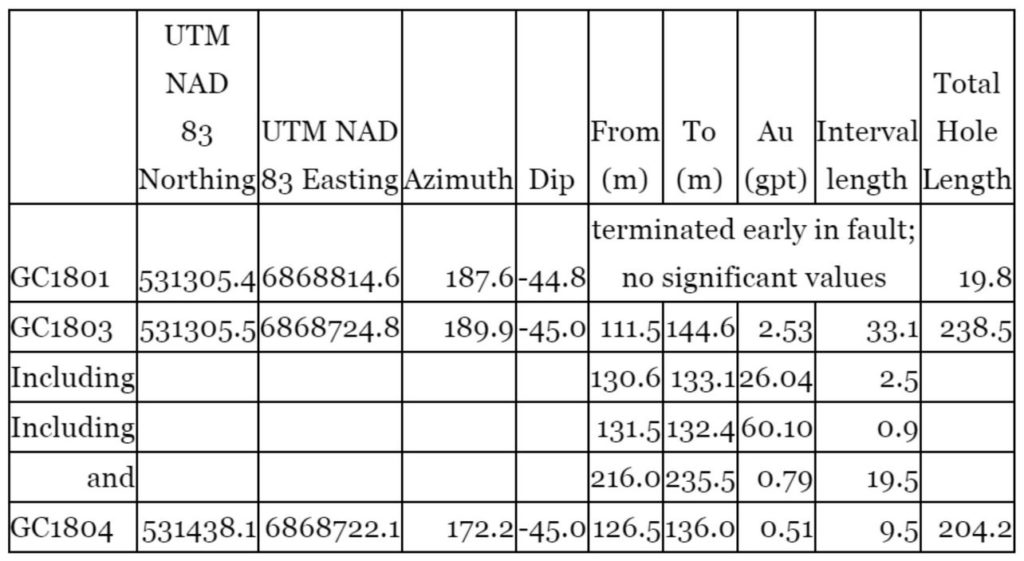 Assay results remain outstanding on the remaining five drill holes.  Summary grades above are reported uncapped as there are insufficient results returned to date to make a reasonable capping determination.

President and CEO, R. Kim Tyler commented, “We have had an exceptional first field season at Golden Culvert and are extremely pleased with our results to date.  The high grade 60.1 gpt gold intercept and the broader low grade gold around it in hole GC1803 confirm what we have learned from our mapping, trenching and previous historical work; that a vertically dipping structural corridor of gold-bearing quartz veins, quartz breccia and sulphide mineralization can be traced over 450 metres of strike; 130 metres deep so far and remaining open both along strike and depth.  We have only focused on a small 800 metre segment of the larger 24 kilometres of prospective strike length within our property option.  We are expecting further results in the near future, and as the hole assay results are returned and analyzed they will be reported in separate press releases.”

All trench and drill core samples were delivered to the ALS Global preparation facility in Whitehorse, Yukon Territory where they were crushed to 70% passed a 2mm sieve, then a 250g split was pulverized until better than 85% passed a 75 micron screen. Gold was tested by a 30 gram fire assay method with an atomic absorption finish at the Vancouver ALS lab facility. Assay results that exceed 100 gpt Au by this method are re-assayed by fire assay with a gravimetric finish.  In addition to the quality assurance and quality control program performed by ALS, Stratabound personnel insert internationally certified standards and field blanks into the sample stream at the rate of one QA/QC sample for every 15 samples and maintain a program of duplicate sampling on pulp rejects.

About the Golden Culvert and Little Hyland Properties

Trench samples on six trenches completed earlier this summer have been reported on in Stratabound’s press release dated August 23, 2018.  Prior to this summer’s trenching and drilling 3,645 soil samples, 48 stream samples, 239 rock samples, 19.4 line-km of ground magnetic survey and 18.5 line-km of VLF survey had been taken at the property.  This summer’s program of $0.75 million includes the completed trenching and drilling to further explore the highly mineralized areas of the property.

Stratabound Minerals Corp. is a Canadian exploration and development company focused on the Yukon Territory.  The Company also holds a significant land position that hosts three base metals deposits in the Bathurst base metals camp of New Brunswick featuring the Captain Copper-Cobalt Deposit that hosts an NI 43-101 Measured+Indicated resource.

Stratabound management has a diversified track record of exploration, development and operating successes that will facilitate the development of the Company’s exploration projects.
Mr. R. Kim Tyler, P.Geo., President and CEO of Stratabound, and a “Qualified Person” for the purpose of NI 43-101, was responsible for managing and supervising the exploration program and has verified the data disclosed, including sampling, analytical, and test data underlying the information or opinions contained in this disclosure.  Mr. Tyler has reviewed and approved the contents of this news release.

For further information, please see the Golden Culvert presentation and the NI 43-101 technical report on the Stratabound web site, www.stratabound.com.