Company to Hold Update Call Today at 11:30am EST

White Gold Corp. [TSX.V: WGO, OTC – Nasdaq Intl: WHGOF, FRA: 29W] is pleased to announce Rotary-Air-Blast (“RAB”) drill results from the Vertigo target on the JP Ross property, Yukon Canada. Assays for three additional RAB holes have been received, returning additional near surface, high grade mineralization, including some of the highest grades ever in the White Gold District, and also expanding the drilled strike length of mineralization to 235m. With multiples holes encountering high-grade gold intercepts and many ending in mineralization at relatively shallow depths, Reverse Circulation (“RC”) drilling has been initiated at JP Ross.

These results mark a significant discovery by the Company produced through its fully funded regional exploration program backed by partners Agnico Eagle Mines Limited (TSX: AEM, NYSE: AEM) and Kinross Gold Corp (TSX: K, NYSE: KGC).  Systematic exploration has also been conducted on 16 other properties with results to be released in due course. Maps further detailing drill hole and grab sample locations as well as results can be found at http://whitegoldcorp.ca/investors/exploration-highlights/.

The Company will host a conference call at 11:30am EST today, Tuesday October 2, 2018 for management to provide additional context regarding these and other significant results encountered this year and answer questions. See below for call details.

Shawn Ryan, Chief Technical Advisor of the Company stated, “This appears to potentially be one of the most significant and interesting discoveries in the White Gold District to date; it is the kind of mineralization that could have produced the local placer gold deposits found in the area. The high-grade nature found at such shallow depths and the fact that there appears to be multiple mineralized zones creates the perfect recipe to build economic ounces. The ability of our team to hit significant gold mineralization on almost every drill hole over 235m of strike on a new target is a true testament to the tenacity and effectiveness of our team and exploration methodology. With each new discovery we are gaining a better understanding of the regional and local geology. We now have increased confidence in the potential for further discoveries in this area as our exploration team continues to explore other targets on the JP Ross property on trend with Vertigo”

A total of 917.45m of RAB drilling over 17 holes was completed on the Vertigo target. Several of the RAB holes failed to reach full depth due to difficult ground conditions adjacent to or within the mineralized zones. The RAB was converted to an RC system to maximize recoveries and to date 1,224 m of RC has been drilled over 17 holes. This includes step-out drilling to test additional identified zones of mineralization (V1, V2, & V7 – V10), drilling along strike extensions of the V3 – V5 zones and initial drill testing on newly identified targets on trend through geologic mapping/prospecting including the recently announced Suspicion target, 4km to the southwest of Vertigo.

Results for 3 additional holes from the Vertigo have been received with individual assays ranging from trace to 60.4 g/t Au and are associated with strongly elevated Ag, Pb, Bi, +/- As. All reported holes were drilled either due north (000o) or due south (180o) at dips ranging from -55o to -60o. The most significant results were obtained from holes JPRVERRAB18-005 & JPRVERRAB18-014.

JPRVERRAB18-005 is located 50m to the southwest of JPRVERRAB18-001 at a due north azimuth and dip of 55o. The hole targeted the V3 zone and returned 1.49 g/t Au over 16.76m from 12.19m depth, including 9.37 g/t Au over 1.52m from 27.43m depth, where it ended in mineralization. The hole has subsequently been extended with an RC drill hole to test the mineralized zone to further depth. Results for the follow up RC hole are pending and will be reported in due course.

JPRVERRAB18-014 is located 160m east of previously reported hole JPRVERRAB18-001 and was drilled at a 180o azimuth and 60o dip. The hole was targeting strongly anomalous As-Pb-Bi (+/- Au-Ag) in XRF results from recent GT Probe sampling across the interpreted V6 zone and returned 23.44 g/t Au over 24.38m from surface (0.00m). This includes 3 subintervals consisting of 59.3 g/t Au over 3.05m from surface, 39.4 g/t Au over 3.05m from 12.19m depth and 26.1 g/t Au over 4.572m from 19.81m depth. The gold mineralization is associated with strongly elevated Ag – Pb (As-Bi) and averaged 145 g/t Ag and 0.54% Pb over the 24.38m interval. The hole ended in mineralization at 28.38m depth due to air loss in strongly fractured ground. The hole has been subsequently re-entered using RC equipment and extended to depth. The results of the additional drilling are in progress and will be presented in due course. Gold, silver, and lead assays for the individual 1.52m samples within the reported interval are presented below. 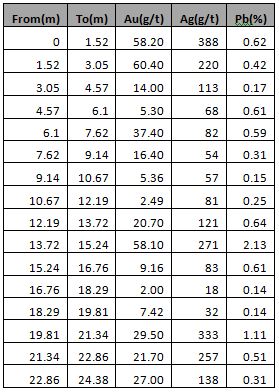 Interpretation of the results is ongoing and there is not currently enough information to estimate true thickness of the mineralized zones.

Significant drill results from the Vertigo target included in this release are detailed in the table below.

Previously announced RAB significant results from Vertigo are summarized below.

Assays for an additional grab samples from the Vertigo target area were received with results ranging from 0.03 g/t to 257.3 g/t gold and included 5 samples >1g/t Au and 2 samples >30 g/t Au, including 32 g/t Au & 257.3 g/t Au. The high grade 257.3 g/t Au sample was from the eastern end of the Vertigo along the projection of the V3 structure and consisted of a brecciated quartz vein with strong scorodite staining and visible gold. The sample also returned 291 g/t Ag and 2.65% Pb.

Rock grab sampling on the Vertigo target has defined strong mineralization over a 1.1km NW trend with 10 mineralized zones (V1 to V10), with individual zones having been traced up to 400m along strike with all currently open along strike and at depth. The samples are interpreted as being in-place and representative of the bedrock below due to the unglaciated nature of the area. Significant results are summarized below

David D’Onofrio (Chief Executive Officer), Shawn Ryan (Chief Technical Advisor), Rob Carpenter (Director) and Jodie Gibson (VP, Exploration) of the Company will host a conference call today to discuss the results in greater detail and answer questions. The call-in details are provided below and a recording will be available at the link below following the call.

The property is located 25km north of the Company’s flagship White Gold property which has a mineral resource of 960,970 ounces Indicated at 2.43 g/t gold and 262,220 ounces Inferred at 1.70 g/t gold and 55km north of the Coffee project owned by Goldcorp Inc. (TSX: G, NYSE: GG) with a M&I gold resource(3) of 4.1M oz. Historic exploration performed on the JP Ross property by Underworld Resources and Kinross Gold includes geochemical surveys, trenching, airborne magnetic and radiometric surveys, and 8,592m of diamond drilling over 64 holes. 14 target areas are currently known and large portions of the property are unexplored.

(3)           Noted mineralization is as disclosed by the owner of each property respectively and is not necessarily indicative of the mineralization hosted on the Company’s property.

The Company owns a portfolio of 21,218 quartz claims across 34 properties covering over 423,000 hectares representing over 40% of the Yukon’s White Gold District. The Company’s flagship White Gold property has a mineral resource of 960,970 ounces Indicated at 2.43 g/t gold and 282,490 ounces Inferred at 1.70 g/t gold as set forth in the technical report entitled “Independent Technical Report for the White Gold Project, Dawson Range, Yukon, Canada”, dated March 5, 2018, filed under the Company’s profile on SEDAR. Mineralization on the Golden Saddle and Arc is also known to extend beyond the limits of the current resource estimate. Regional exploration work has also produced several other prospective targets on the Company’s claim packages which border sizable gold discoveries including the Coffee project owned by Goldcorp Inc. (TSX: G, NYSE:GG) with a M&I gold resource(3) of 4.1M oz and Western Copper and Gold Corporation’s Casino project which has P&P gold reserves(3) of 8.9M oz Au and 4.5B lb Cu. The Company has outlined an aggressive exploration plan backed by partners Agnico Eagle Mines Limited (TSX: AEM, NYSE: AEM) and Kinross Gold Corp (TSX: K, NYSE: KGC). For more information visit www.whitegoldcorp.ca. 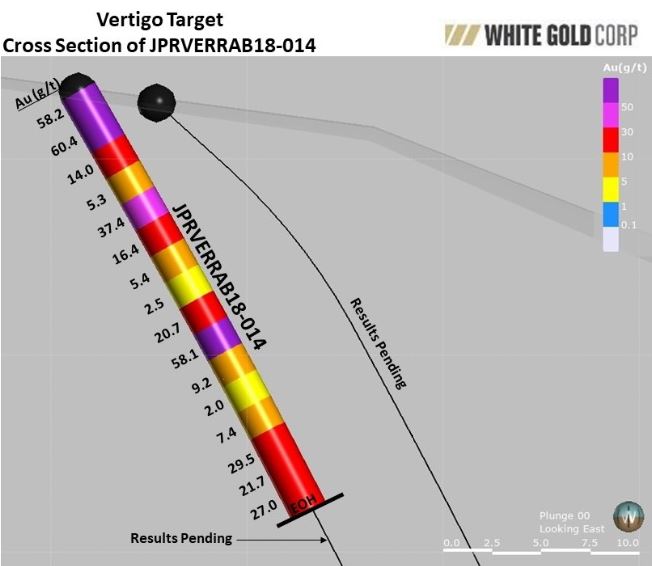 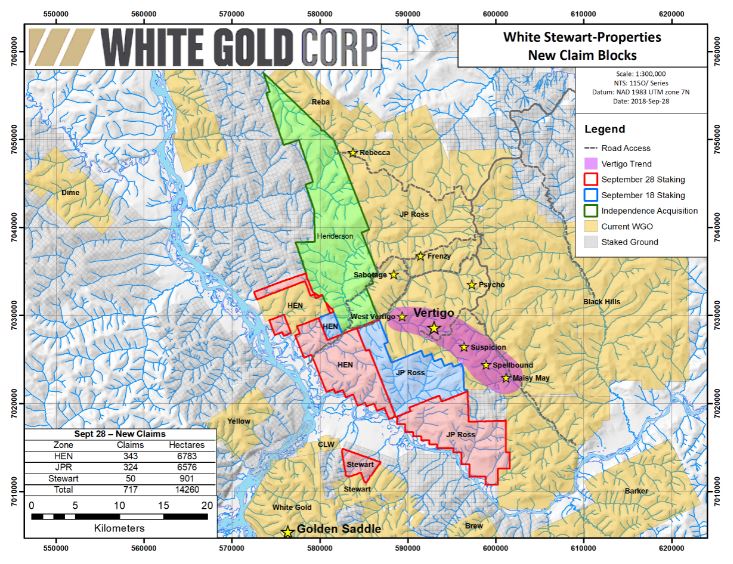 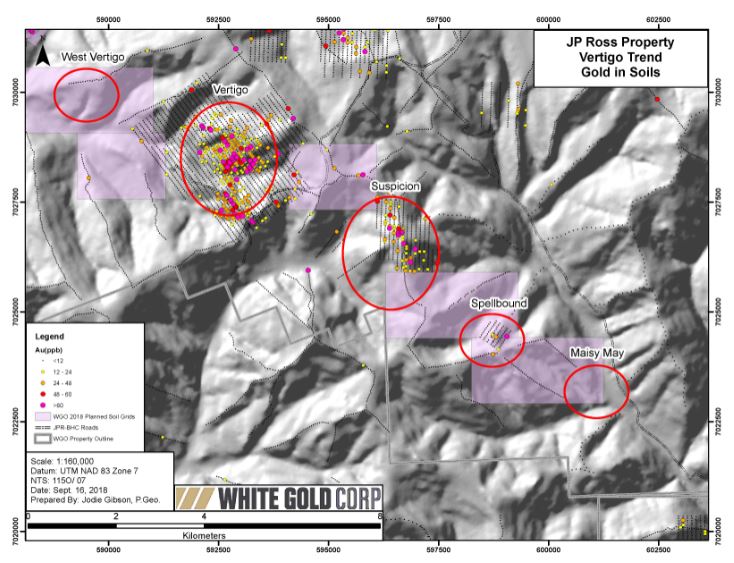 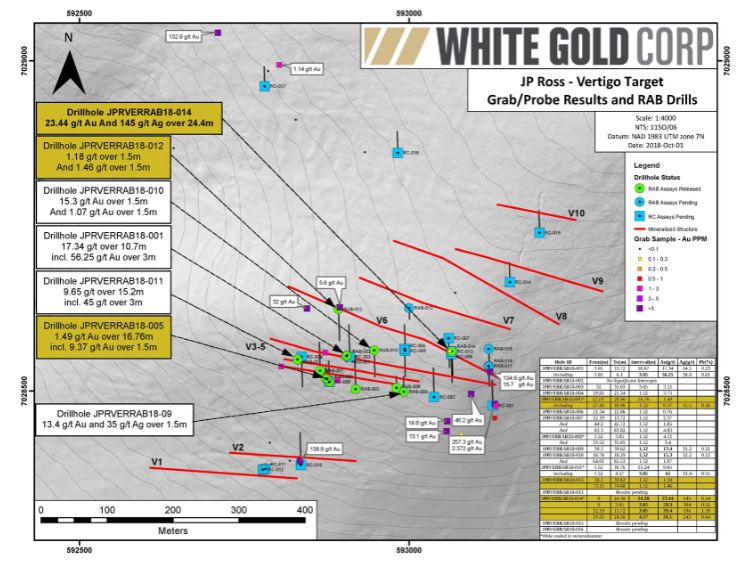