Discovery Silver Corp. (TSX-V: DSV, OTCQX: DSVSF) (“Discovery” or the “Company”) is pleased to announce results from its Preliminary Feasibility Study (“PFS” or “the Study”) on its 100%-owned Cordero silver project (“Cordero” or “the Project”) located in Chihuahua State, Mexico. The PFS project team was led by Ausenco Engineering Canada Inc. (“Ausenco”), with support from AGP Mining Consultants Inc. (“AGP”) and Knight Piésold Ltd. (“Knight Piésold”). Highlights include (all figures are in US$ unless otherwise noted):

Tony Makuch, CEO, states: “We are extremely pleased with the results from our Pre-Feasibility Study. The PFS positions Cordero uniquely in the silver developer space with a long mine life of 18 years and production averaging over 35 Moz AgEq in the first 12 years of the mine life. This represents an approximate 40% increase in total ounces produced compared to our 2021 PEA. Despite significant industry-wide cost escalation over the last year, cost savings from a streamlined process design and improved metallurgical performance have resulted in a highly capital efficient project with excellent margins.

“The Study also outlines the significant economic contribution the Project will have through employment, taxes and the purchases of local goods and services in the Municipality of Parral, in Chihuahua State and in Mexico. We now look forward to advancing the Project toward a Feasibility Study and surfacing additional value through numerous optimization opportunities we have already identified.”

The Company will be hosting a Conference Call to present the PFS results on Tuesday January 24, 2023, at 11:00am ET. A presentation by management will be followed by Q&A.

Project Economics
The economics for the PFS were based on the following metal prices: Ag – $22.00/oz, Au – $1,600/oz, Pb – $1.00/lb and Zn – $1.20/lb. Sensitivity of the Project’s expected after-tax NPV, IRR and payback at different commodity price assumptions is outlined in the table below:

Production & Costs
Annual production over the life-of-mine (“LOM”) is expected to average 33 Moz AgEq. In Years 5 – Year 12 production averages 40 Moz AgEq with peak production in Year 11 of 52 Moz AgEq. These production levels position Cordero as one of the largest primary silver mines globally.

All-In Sustaining Costs (“AISC”) average $12.80/oz AgEq in Year 1 – Year 12 and $13.62/oz AgEq over the LOM. This represents an approximate increase of 10% versus the PEA. This increase is primarily due to higher treatment and refining charges and industry wide cost escalation including higher assumed prices for consumables, diesel ($1.10/L vs $1.00/L in PEA) and power ($0.068/kWh vs $0.062/kWh). These increases were offset to a large extent by cost reductions from lower reagent consumptions and unit cost reductions attributable to higher throughput rates in the PFS compared to the PEA.

Note – AgEq Produced is metal recovered in concentrate. AgEq Payable is metal payable from concentrate and incorporates metal payment terms outlined in the Concentrate Terms section below. AgEq is calculated as Ag + (Au x 72.7) + (Pb x 45.5) + (Zn x 54.6); these factors are based on metal prices of Ag – $22/oz, Au – $1,600/oz, Pb – $1.00/lb and Zn – $1.20/lb.  AISC is a non-GAAP measure; refer to the Non-GAAP Measures section of the release for further information on this measure. See Technical Disclosure section for AISC calculation methodology. 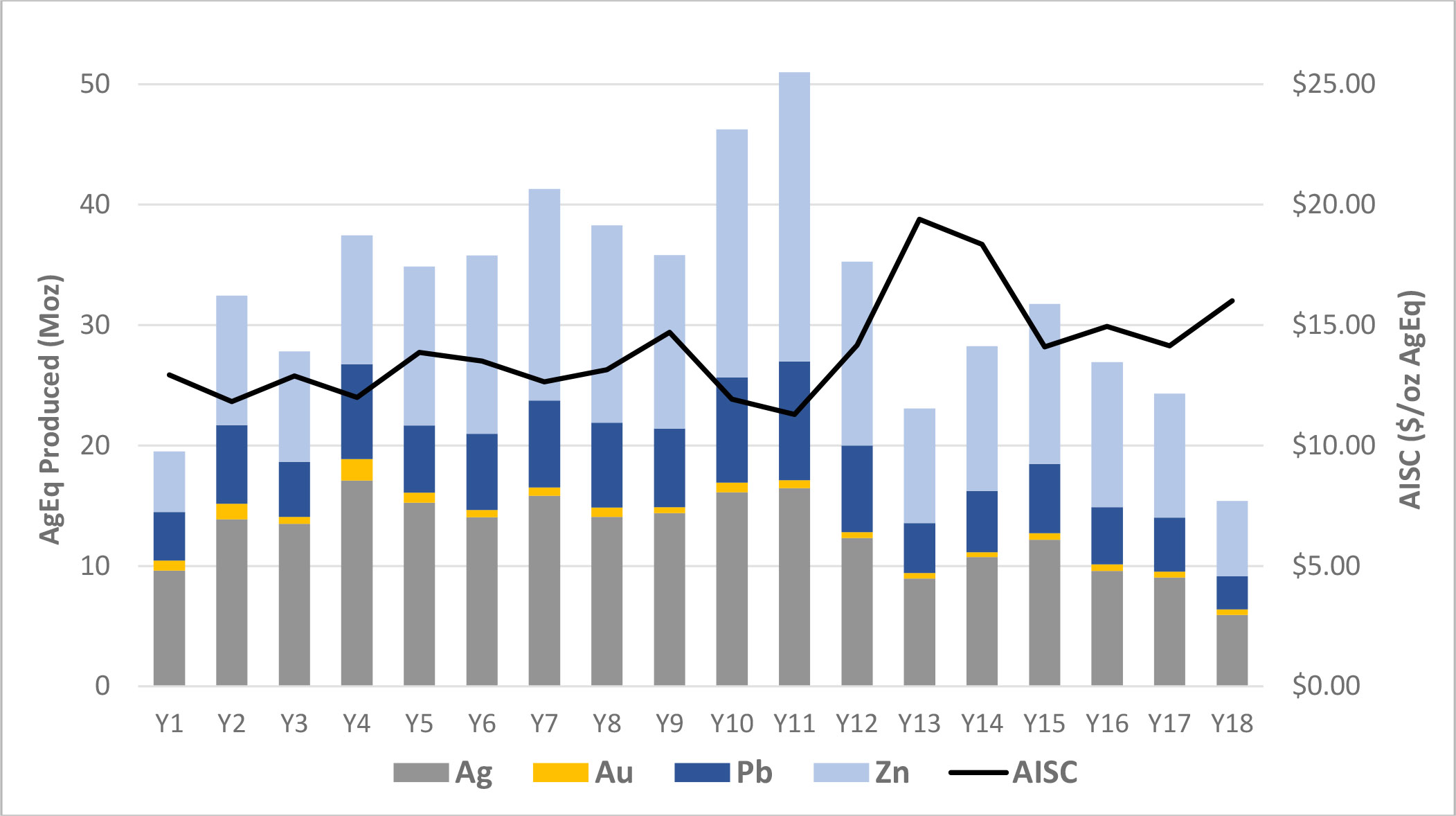 2023 PFS vs 2021 PEA Summary
The PFS incorporates numerous significant positive developments in comparison to the PEA. Based on drilling success at depth and in the northeast of the deposit the size of the open pit has increased by over 30% and the strip ratio has improved to 2.1:1. This additional drilling has also significantly increased the confidence level of the underlying resource with the PFS supported by Reserves of which 54% are in the Proven category.

The PFS incorporates throughput rates of 25,500 tpd in Phase 1 and 51,000 tpd in Phase 2, ~25% higher than the PEA. This has resulted in average annual production increasing by 27% over an extended mine life of 18 years.  The process design has been streamlined based on the excellent results from the 2022 metallurgical testwork program with the co-processing of oxides and sulphides via flotation allowing for the elimination of the heap leach circuit.

Initial capital increased by 24% to $455 M. This was primarily due to the 25% increase in the initial size of the plant, a switch to owner-operated mining (assuming lease finance of mine equipment) driven by the growth in size of the open pit (the PEA assumed contractor mining) and cost inflation.

Resource Update
In conjunction with the PFS, the Mineral Resource Estimate for Cordero has been updated to incorporate an additional 67,800 m of drilling (total drilling of 287,400 m in 706 drill holes). The Measured & Indicated Resource has grown by 35% to 1,132 Moz AgEq and the Inferred Resource has grown by 40% to 119 Moz AgEq as summarized below. This resource expansion has largely been driven by exploration success at depth and in the northeast part of the deposit.

Mineral resources that are not mineral reserves do not have demonstrated economic viability. Further details on the Resource including all supporting technical disclosure is outlined in Appendix A.

Cordero is a highly capital-efficient project due to numerous underlying advantages:

Initial Capital (to achieve plant throughput of 9.3 Mt/a)
Initial capital to build Cordero Phase 1 is estimated to total $455 million and will be incurred over a two-year construction period. This capital estimate includes the construction of on-site infrastructure, power transmission line, Phase 1 of the process plant with nameplate capacity of 9.3 Mt/a (25,500 tpd), all pre-stripping activities and construction of the TSF including the initial starter dam embankment providing 2 years of tailings storage.

Expansion Capital (to expand plant to 18.6 Mt/a)
The processing facility will be expanded to a nameplate capacity of 18.6 Mtpa (51,000 tpd) in Year 3 and Year 4 at an estimated cost of $290 million. This expansion includes the addition of parallel grinding and flotation circuits, additional on-site infrastructure and a major tailings dam lift that is concurrent with plant expansion.

An expansion of the flotation circuit is planned for Year 9 at a cost of $31 million. This includes the addition of cleaner flotation cells, a filter and a thickener to accommodate the higher zinc grades in Year 10 and Year 11.

Sustaining Capital
Sustaining capital over the LOM totals $228 million (includes closure costs net of salvage).This includes $106 million to be spent on tailings management facility expansions, with the remainder to be spent on mine equipment, the process plant, mobile equipment and replacements/refurbishments of infrastructure assets. Sustaining capex for the process plant has been classified as operating costs under the maintenance category. Sustaining capex for mining only includes down payments on replacement equipment with the remaining lease costs classified as mine operating costs.

Mining
The mine plan incorporates accelerated stripping as well as stockpiling of low-grade material in order to optimize the grade profile over the LOM.

Processing
Processing was broken into two main phases to optimize the capital efficiency of the project. Oxides and sulphides are co-processed up to a maximum oxide tonne proportion of 10% of total mill feed.

Head grades
The mine plan focuses on feeding higher grades to the mill earlier in the mine life:

Metal recoveries to the two concentrates based on the projected oxide-sulphide blends from the mine plan are summarized below:

Operating costs are summarized in the table below.

About Discovery
Discovery’s flagship project is its 100%-owned Cordero project, one of the world’s largest silver deposits. The PFS summarized in today’s release demonstrates that Cordero has the potential to be developed into a highly capital efficient mine that offers the combination of margin, size and scaleability. Cordero is located close to infrastructure in a prolific mining belt in Chihuahua State, Mexico. Continued exploration and project development at Cordero is supported by a strong balance sheet with cash of approximately C$45 million.

On Behalf of the Board of Directors,
Tony Makuch, P.Eng
CEO

Qualified Person
The PFS for the Company’s Cordero project as summarized in this release was completed by Ausenco with support from by AGP and Knight Piésold. A full technical report supporting the PFS will be prepared in accordance with NI 43-101 and will be filed on SEDAR within 45 days of this press release. The most recent technical report for the Cordero Project is the 2021 Preliminary Economic Assessment (PEA). The PEA was completed by Ausenco Engineering Canada Inc. with support from AGP Mining Consultants Inc. and Knight Piésold and Co. (USA). The full technical report supporting the PEA is available on Discovery’s website and on SEDAR under Discovery Silver Corp. The scientific and technical content of this press release was reviewed and approved by Gernot Wober, Vice President Exploration for the Company, who is a “Qualified Person” as defined by National Instrument 43-101 – Standards of Disclosure for Mineral Projects (“NI 43-101”).

This news release is not for distribution to United States newswire services or for dissemination in the United States.

The Company has included certain non-GAAP performance measures as detailed below. In the mining industry, these are common performance measures but may not be comparable to similar measures presented by other issuers and the non-GAAP measures do not have any standardized meaning. Accordingly, it is intended to provide additional information and should not be considered in isolation or as a substitute for measures of performance prepared in accordance with IFRS.

The Company calculated total cash costs per ounce by dividing the sum of operating costs, royalty costs, production taxes, refining and shipping costs, by payable silver-equivalent ounces. While there is no standardized meaning of the measure across the industry, the Company believes that this measure is useful to external users in assessing operating performance.

The Company has provided an AISC performance measure that reflects all the expenditures that are required to produce an ounce of payable metal. While there is no standardized meaning of the measure across the industry, the Company’s definition conforms to the all-in sustaining cost definition as set out by the World Gold Council in its guidance dated June 27, 2013. Subsequent amendments to the guidance have not materially affected the figures presented.

Free Cash Flow is a non-GAAP performance measure that is calculated as cash flows from operations net of cash flows invested in mineral property, plant and equipment and exploration and evaluation assets. The Company believes that this measure is useful to the external users in assessing the Company’s ability to generate cash flows from its mineral projects.