A recent article in The Sydney Morning Herald caught my eye when it warned that “China will be the only nation with the essential materials for defense and renewables technology over the coming years as they increase their market dominance of rare earths”.

China produces more than 90% of all rare earths on a global scale. It produces 100,000 tons of rare earth oxides out of approximately 112,000 tons worldwide. If Australia is concerned about this situation, what about the United States? We reported two years ago that the U.S. was overly relying on China for critical rare earth elements for its defense systems. In 2019, the new trade war between the U.S. and China opened up the possibility that China could stop selling rare earth products to the U.S. as it did to Japan a few years ago. Is the situation better or worse today?

We reached out to James Kennedy, President of ThREE Consulting, St. Louis, Missouri, for comment. Kennedy is an internationally recognized expert on the economic, national security and geopolitical ramifications of China’s rare earth monopoly and thorium nuclear energy systems and a consultant to the U.S. government.

“Better or worse is actually lots of topics and lots of answers, but for brevity, some of the news coverage is getting better,” said Kennedy who wrote the following comments. 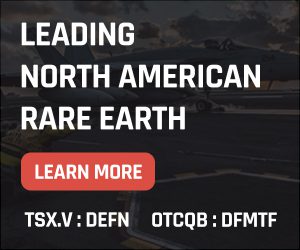 ONGOING FAILURE: As for politics and policy, the Pentagon remains entirely detached from reality.Â  Evidence of this is the fact that the Pentagon/U.S. Army/Cornerstone grant award process had to withdraw awards to [rare earths companies] MP Materials and Lynas Corp. for the compound reasons that neither company can claim to be a producer of heavy rare earths (HREE), a direct requirement in the title of the grant (“Heavy Rare Earth Element (HREE) Supply Chain Resiliency” – Cornerstone Grant Number CRS CS 20 0802).

Lynas owns and operates the Mt. Weld rare earths mine in Western Australia and a processing facility in Malaysia.

Second, the Lynas grant was specifically for developing a U.S.-based SEG facility, with the Texas company Blue Line; however, Sm (Samarium), Eu (Europium) and Gd (Gadolinium) are not heavy rare earths (the division is based on atomic chemistry).Â NOTE:Â The division between LREEs and HREEs is based on the LREEs having unpaired electrons in the 4f electron shell and HREEs having paired electrons in the 4f electron shell. Scandium (atomic number 21), a transition metal, is the lightest REE, but it is not classified as one of the group of LREEs nor one of the HREEs. In total there are 17 rare earth elements.).Â Â

Another reason is that independent economic assessments show Lynas to be a sub-marginal project based on standardized economic evaluations.

For MP Materials and its Mountain Pass rare earths mine and processing plant in California, the only one in North America, the story is much worse.Â Following its 2015 bankruptcy, Washington strangely welcomed Chinese investors. In 2017, a U.S. government approved a US$20.5 million sale to MP Materials, an investment consortium that included Chinese state-controlled Shenghe Rare Earth Shareholding Company, which has a 9.9% interest.

A 2019 economic assessment showed that MP Materials cannot meet a minimum standardized economic return under any circumstances (literally, no matter what they allowed for, it was a loser; in fact, the biggest loser of all companies measured).

The list could go on, but mostly, the Pentagon has no depth of knowledge and low levelÂ bureaucratsÂ are making decisions based on ignorance, misinformation or something worse.

Also worthy of note, most of the REE bills in Congress continue to focus on opening up new REE mines.Â None have bothered to consider what happens if the U.S. (and/or our allied nations) open up three or four new REE mines. In short, the result is 60,000 to 80,000 tons per year in new production, resulting in massive price declines and bankruptcies (just like when Molycorp and Lynas ramped-up against each other).Â Currently, China is able to set the prices of the various rare earth elements.

Republican Texas Senator Ted Cruz’s bill is an invitation to sky high prices at the metallic end of the value chain and a slug fest at the mining end. When have subsidies ever worked or not produced some other problem that became larger than the original problem?

THE GOOD NEWS: The White House has a very professional team that includes participants from the Departments of Energy, Interior, State and Commerce looking at solving this problem known as The White House Rare Earth Task Force.

They are realistic and understand the economic, defense and hegemonic/geopolitical motives behind China’s monopoly.Â They understand that U.S. mining, refining and metal making may not always be competitive against China’s multi-tiered monopolistic strategy.Â They are looking for a sustainable, multinational solution that may look similar to the proposed REE Cooperative in Senator Rubio (S. 2093) and Tipton (H.R. 4410) bills.

My Editor’s Comment would be that if the U.S. is looking for a “multinational” solution to obtaining rare earths from sources other than China, it may want to continue discussions with Canadian rare earth companies that are exploring and developing prospective REE deposits.

Based successful 2019 drilling results, these figures represent a 49% increase in overall tonnage, a 30% increase in overall average grade, in part though the incorporation of potentially economically significant praseodymium not previously estimated, increased Inferred Resources by 730,000 tonnes, plus expansion potential. One of the highest grade REE intercepts to date within drill hole WI19-31 yielded 4.43% LREO (Light Rare Earth Oxides) over 83 metres; including 5.47% LREO over a drill core interval of 33 metres.

The company plans to fast-track the project with a pilot plant as it advances toward a Preliminary Economic Assessment.