Highlights of the drilling program are:

Mr. Colin Christensen stated, “The drilling intersected multiple widths of gold mineralization ranging from near surface to depth of approximately 180m below surface localized along the contacts of the Twin ponds syenite intrusions. The multiple episodes of gold bearing quartz veins suggest a once active hydrothermal center carrying native gold, arsenopyrite and pyrite mineralization. It is believed that secondary faults/structures intersecting the main Northeast tending intrusive corridor may also contain significant gold mineralization as is supported by drilling results and the recent discovery of gold mineralization in outcrop 4.5km northwest of Paradise Lake.”

The target tested by the drilling program is part of a nearly 10 km long trend identified from surface samples that returned gold concentration ranging from 0.05 to 144.7g/t gold. Numerous chargeability targets remain to be tested, identified from the 2021 IP geophysical survey.

Hole PL-22-16 intersected a 10.9-meter core interval of 0.21 g/t Au. This zone of shallow pyrite-arsenopyrite mineralization is apparent in the 2021 IP geophysical results as a chargeability high. The host rock consists of various phases of syenite, diorite and mafic dykes with local xenoliths of other intrusive and felsic volcanic rocks. Alteration consists of variable degrees of fine-grained interstitial chlorite-carbonate-K-feldspar-pyrite and quartz-sericite-ankerite. Quartz veins vary from laminated, massive, breccia and stockwork-like. They are often vuggy and contain fine-grained pyrite and arsenopyrite. Only veins that contain significant arsenopyrite-pyrite content returned significant gold concentrations. Mineralized intervals containing greater than 0.1g/t gold from Phase 2 program are set out in Table-1 below: 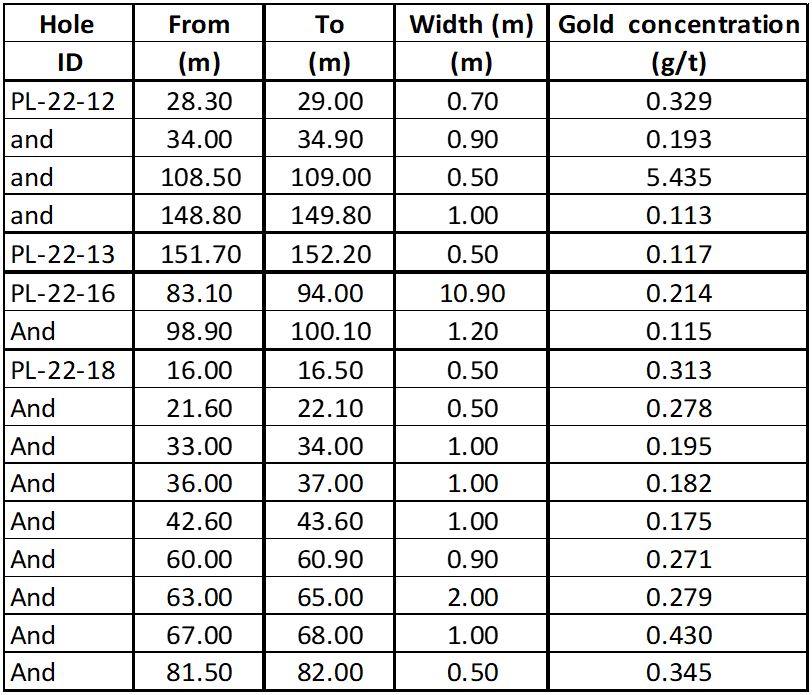 Notes: The cut-off selected for determining the weighted average for the mineralized intervals was 0.1g/t gold. No limitation placed on the sample interval.  Gold grades are rounded. Intervals reported in table are core intervals and do not represent true width.

PL-22-12 (161m, 291 o, -45 o) is located 50m south of collar PL-22-01/02. It targeted a 400m wide chargeability high beneath the lake and corresponding gold grades and pyrite-arsenopyrite intersected in hole PL-22-01/02. The hole collared into cross bedded siltstone from 22-25.3m depth. Syenite was then intersected until end of hole with at least 3 distinct chilled margins. Eleven zones from 1-10m wide contain trace amounts, up to 5% fine-grained pyrite-arsenopyrite, disseminated, fracture filling and in veins up to 6cm wide. Alteration in the syenite includes variable K-feldspar-chlorite-leucoxene-ankerite and veins of quartz-chlorite-ankerite/calcite.

PL-22-13 (164.2m, 070 o, -45 o) is located on the northwest side of Twin Pond targeting an area of angular quartz veins with up to 144 g/t Au. The hole collared into syenite at 22.2m and continued until the end of the hole.  Interbedded bedded greywacke/siltstone was intersected over the core interval from 73 to150m. An intermediate dyke occurs from 69-73m.  Only trace amounts of pyrite occur in moderately altered syenite and siltstone. Fine-grained pyrite occurs as disseminations, fracture fill, and in breccias/ fault zones up to 1.5m wide. Alteration includes moderate, interstitial to pervasive pink K-feldspar, chlorite-leucoxene-calcite-ankerite.

PL-22-14 (159m, 040 o, -45 o) is located 160m west of PL-22-13. It targeted a broad positive resistivity signature. The hole collared into sediments consisting of cross bedded greywacke and maroon siltstone until end of hole.  Bedding appears steeply dipping to the east. The syenite contact was not intersected as was anticipated. Two mafic dykes were intersected at 20 and 70m depth and are 1 and 3.5m wide. Only trace amounts of fine-grained pyrite and chalcopyrite were intersected in the mafic dykes.

PL-22-16: (137m, 115o/-45 o) is located on the west side of North Twin Pond drilling southeast towards hole PL-22-12 and 100m south of PL-22-15 along the same linear syenite intrusion. The hole collared into interbedded green-grey wacke and maroon argillite from 8.7-58m depth and syenite intrusion to end of hole. Pyrite-arsenopyrite ranges from trace amounts up to 7% interval within the syenites over broad intervals up to 15m. Fault zones and brecciated syenite contain arsenopyrite mineralization related to quartz veining. Alteration includes pervasive k-feldspar with zones of strong ankerite, sericite and chlorite.

PL-22-17: (122m, 295o/-45 o) is located roughly 50m south of hole PL-22-07 testing the same mineralized structure observed in PL-22-07. The hole collared in syenite and intersected 3 distinct syenites before contacting interbedded green-grey wacke and maroon argillite. Five weakly mineralized zones are identified. Based on analytical results, no intervals contained greater that 100 pb gold. Quartz veins are very thin and contain trace amounts of pyrite. Alteration is patchy and consists of k-spar, sericite, chlorite and ankerite, where ankerite and sericite is local, and chlorite and k-spar are more prominent.

PL-22-18: (116m, 025o/-45 o) is located at the same pad as hole PL-22-07 drilling northeast. The hole collared into syenite at 9.8m depth. Mineralization is hosted mainly within a darker diorite altered by quartz-calcite-ankerite-pyrite-arsenopyrite related to strong fracturing. It also contains pervasive K-feldspar and sericite with local ankerite. It contains 1-3% pyrite-arsenopyrite mineralization over several zones up to 3m wide. The diorite has a faulted lower contact hosting local arsenopyrite mineralization.

Property wide prospecting and mapping at the Miguel’s Lake, Stony Caldera, and Paradise Lake Projects began in May. In total 530 rock samples have been collected from outcrop, subcrop and angular float. Results have been received for 306 of these samples, 29 of which returned >50 ppb Au up to 4.03 g/t Au. Prospecting has identified several areas of outcropping quartz veining and pyrite-mineralization with rare visible gold. This area is 4.5 km northwest of Phase 1 and Phase 2 drilling area at Twin Ponds. Detailed spot chip sampling of the outcrop returned from 1.60 to 4.03 g/t gold, and 3.06 g/t silver in four samples over an exposure of ~15 meters length. Channel sampling is planned to further assess the potential widths and grade of this high priority target.

The Paradise Lake-Stony Caldera properties are considered to have potential to host “Orogenic” and “Intrusive Related” styles of gold mineralization comparable to the Valentine Lake, Cape Ray, Moosehead, and Queensway gold deposits. They are hosted within the Cape-Ray-Valentine Lake (“CRVL”) structural zone. Linear magnetic intrusions of granodiorite/syenite occur in the vicinity of Twin Ponds-Paradise Lake. They are situated along primary or secondary structures to the CRVL. Airborne magnetic data and ground IP surveys have revealed coincident anomalies and multiple phases of intrusive activity. High-grade gold bearing, “leakage” structures have been sampled at surface and intersected in drilling. Similar structural zones elsewhere in the property have been targeted for follow up exploration in 2022.

Sample preparation and analytical work for drill core was completed by Bureau Veritas Commodities Canada Inc. (“BV”) located in Vancouver B.C. BV has an ISO/IEC 17025 certification. Sample preparation followed BV’s code PRP70-1kg. Gold and 36 trace elements concentrations is determined using BV’s code AQ202, ICP-ES/MS on a 30g sample. Aurwest’s QA/QC protocol includes geotechnical measurements, photographs, detailed geological logging and insertion of Standard Reference Material and blanks in the sample streams. A selection of 93 sample pulps with >50ppb Au were run by fire assay and comparatively analyzed. The results when compared to ICP ES/MS were mostly within a standard deviation of variance. Rock sampled collected from 2022 are being send to Eastern Analytical in Springdale, Newfoundland for gold by fire assay and 34 trace elements by ICP-ES/MS.

Elmer B. Stewart, MSc. P. Geol., is the Company’s independent, nominated Qualified Person pursuant to National Instrument 43-101, Standards for Disclosure for Mineral Projects, and has reviewed and approves the scientific and technical information disclosed in this news release

On Behalf of Aurwest Resources Corporation 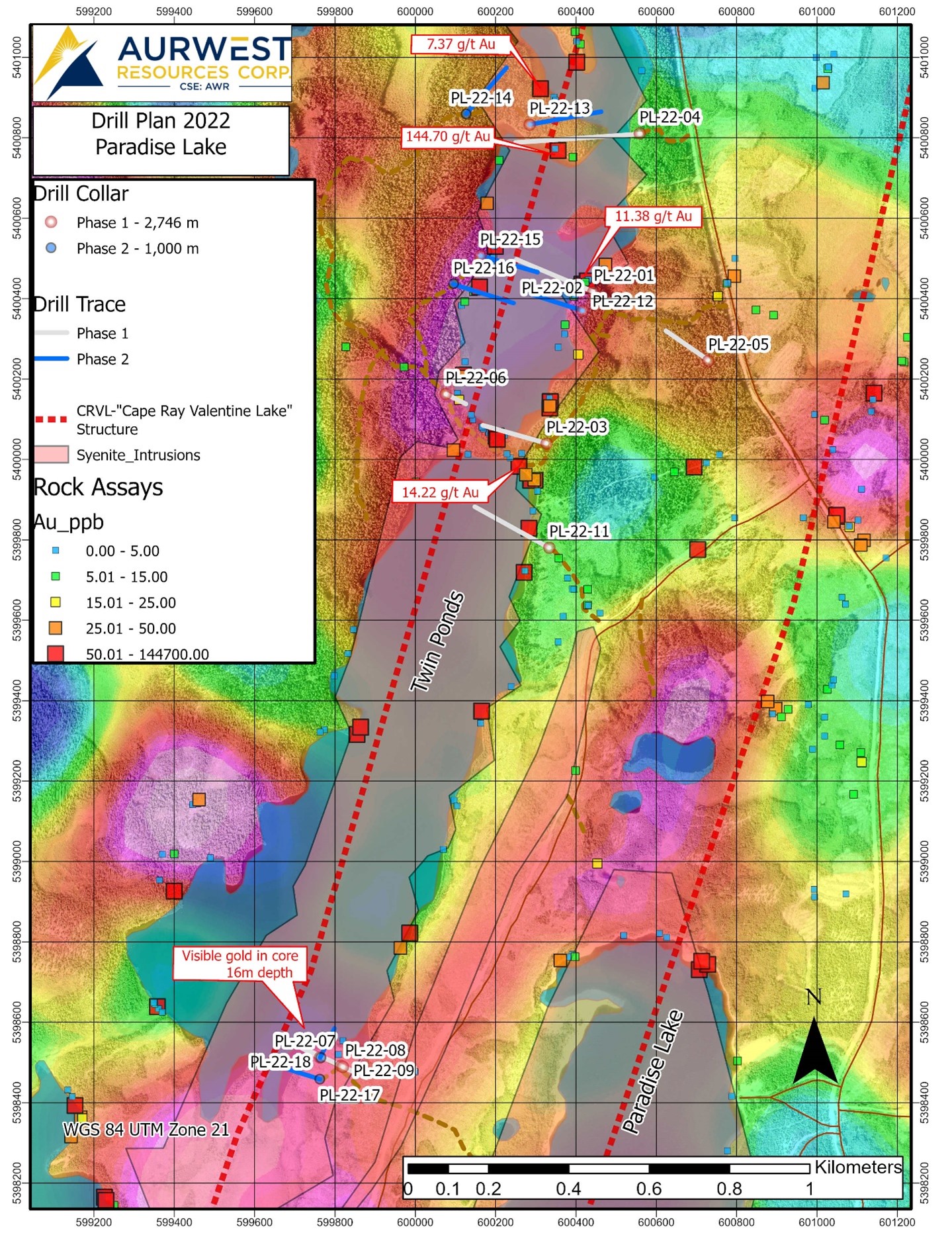 The Canadian Securities Exchange has not reviewed and does not accept responsibility for the adequacy or accuracy of this release.