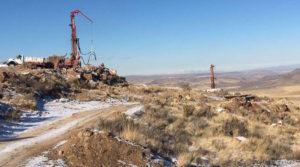 If Paramount succeeds, it will mark a significant milestone for a U.S. state that has been largely ignored by the gold mining industry in recent years.

The Oregon Mining Association, says this was due to the belief that Oregon regulating agencies and the Oregon legislature were hostile to the industry, and that mining permits will not be approved.

Three years ago, the Oregon Legislature moved to change that perception by creating a policy statement via House Bill 3089 that recognized the economic importance of mining to rural Oregon and its residents.

Bill 3089 ordered the Department of Geology and Mineral Industries (DOGAMI) to prepare detailed reports about potential mineral resource sites in the state. Its report included a description of Paramount’s Grassy Mountain Project, which is situated in eastern Oregon.

According to the DOGAMI report, the first gold occurrences were discovered on the eastern Oregon property back in 1984.

Since then, the project has passed through the hands of some high profile owners, including Newmont Mining Corp. [NEM-NYSE]. In April, 2011, Seabridge Gold Inc. [SEA-TSX; SA-NYSE] sold the project to Calico Resources Corp. in return for 14 million shares. Seabridge retains a 10% Net Profits Interest in the project pursuant to the “Deed of Royalties” between Calico and Seabridge dated February 5, 2013. The royalty can be bought for $10 million.

After completing the acquisition of Calico in July, 2016, Paramount has taken on the task of developing Grassy Mountain and putting it into production.

In an interview with Resource World Magazine, Paramount Executive Chairman John Seaberg said it feels a bit like Grassy Mountain has emerged as something of a test case in Oregon. “No-one has ever gone this far through the permitting process,” he said.

He was referring to a process that Paramount hopes to complete when it files the consolidated permit application, hopefully during the first half of 2019. Once the permits are secured, getting to production should be fairly straight forward, he said. “It is a simple project to design and construct and to operate.”

The Grassy Mountain Project sits in rolling hills at an elevation of between 3,300 and 4,300 feet above sea level. Paramount owns 100% of the private land in which the gold deposit sits and controls all mining claims within a 9,300-acre land package.

If all goes according to plan, Grassy Mountain will be a mid-sized underground mine that will be accessed via one decline and a system of internal ramps. Two shafts are included in the design to be used for ventilation.

According to a May 2018 pre-feasibility study (PFS), resources outlined so far can support a high-grade, underground operation producing 47,000 ounces of gold and 50,000 ounces of silver annually over a 9-year life-span that includes the time needed for construction.

The PFS says the operation can be built at a cost of US$110 million and Paramount hopes to be able to begin construction in the second half of 2020.

“With a 10-12 month construction schedule, we should be in production by the second half of 2021,” Seaberg said.

Meanwhile, Paramount is planning a two-phase drill program that will include drilling in the area of the proposed mine as well as on targets known as Wally/Wood, and Dennis Folley, which are located to the north of the main Grassy deposit.

These targets not only have successful historical shallow drilling, but also exhibit similar geophysical properties to the Grassy deposit, including a well-defined resistivity anomaly.

“When you look at the gold space, a lot of the projects being developed today are inherent with several risks, whether it is environmental, indigenous people, or technical risk,” said Seaberg. “Geopolitical risk is a huge issue in the mining industry today,” he said. “We don’t have any of that.”

Based in Winnemucca, Nevada, Paramount benefits from experienced management, tight share structure with only 25 million shares outstanding, and no debt. Albert Friedberg’s Toronto-based FCMI Financial Corp. is the company’s biggest shareholder with a 20% stake.

“This is a very solid company that I think is going to provide a lot of value for our shareholders down the road,” Seaberg said.

Aside from Grassy Mountain, Paramount owns a 100% interest in the Sleeper Gold Project, a former high-grade open pit gold producer located about 25 miles northwest of Winnemucca. The Sleeper Mine was operated by Amax Gold Inc. from 1986 until 1996, producing 1.66 million ounces of gold and 2.3 million ounces of silver.

Sleeper became one of Nevada’s most profitable gold mines with an average cash cost below US$60/oz. While the focus remains on Grassy Mountain, Sleeper could emerge as a longer term, and possibly more significant development opportunity, said Canaccord Genuity analyst Tony Lesiak in a research report. Measured and indicated resources at Sleeper currently stand at 3.14 million ounces of gold. On top of that is an additional 1.5 million ounces of inferred material. However, as much of that material may not be suitable for low cost heap leach processing methods, Seaberg cautioned that Paramount could bring in a joint venture partner to assist with development.