Already established as a major world producer of diamonds, Canada has more mines under development and promising exploration projects 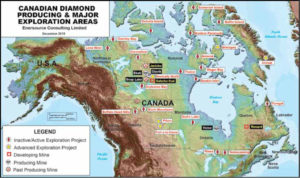 Â Â Â Â Â Â  The 25th anniversary of the discovery of diamonds in Canada that led to an operating mine will be celebrated this year. The hole that made the discovery was drilled September 9, 1991 at Point Lake 20 km southeast of the operating Ekati Mine that opened in 1998 and the nearby Diavik Mine that opened in 2003 in the Northwest Territories.

I had the pleasure of supervising the drill hole at Point Lake that precipitated the largest staking rush in the history of Canadian mineral exploration. But the real credit goes to Chuck Fipke who spearheaded the efforts of the Ekati discovery by Dia Met Minerals that lead to the foundation of a very lucrative diamond mining industry in Canada. From that event diamond exploration spread to the provinces of Alberta, Saskatchewan, Manitoba, Ontario, and Quebec and Nunavut Territory and throughout the NWT that entirely or, in part, were underlain by an ancient craton or Precambrian Shield that was the precursor for hosting diamond-bearing kimberlites (see map).

Two additional mines were discovered at Snap Lake, NWT, (opened in 2008), and Victor, in Ontario (in 2010) to be joined by two more mines at Gahcho KuÃ©, NWT and Renard, Quebec both to be commissioned to start production in the second half of 2016. Two advanced exploration projects in the Northwest Territories and Nunavut continue to show promising results that indicate one or both could become operating mines within five years or more. In Saskatchewan two diamond projects are in advanced stages of exploration.

Northwest Territories: There are two operating diamond mines in the NWT – Ekati and Diavik – where production began in 1998 and 2003, respectively, on or near the shores of Lac de Gras. A third mine at Snap Lake 50 km south of Lac de Gras began production in 2008 but ceased operation in December 2015 and was placed on care and maintenance. All three operations are serviced by a winter road in January and February from Yellowknife and by air-support the rest the year. The Lac de Gras mines are about 220 km south of the Arctic Circle and about 300 km northeast of Yellowknife and are in one of the harshest weather locations in the world. However, due to the high-grade and quality of the diamonds both operations have been highly profitable ventures to their owners. 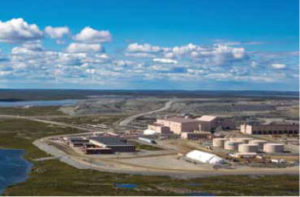 Â Â Â Â Â Â Â Â Â Â Â  The Ekati discovery was the starting point in making Canada a major diamond producing nation. Now in its 17th year of operation, it is the show case of an operating diamond mine in Canada. Dia Met’s discovery was initially funded by BHP Minerals when diamonds in Canada were considered a wild dream by believers from Kelowna, BC, and proved to be a game changer. The Lac de Gras discovery made fortunes for those who realized diamonds could be found beneath northern Canada’s Arctic terrain.

The Ekati discovery created a diamond search that spread hundreds of kilometres across much of central Canada. The magnitude of job creation and national wealth generated from diamond exploration and mining is measured in billions of dollars earned to date and to be continued for many years to come. Ekati production from Koala (underground), Misery (open pit) and Coarse Ore Rejects for the year ending January 2015 was 3.2 million carats from 4.1 million tonnes at a grade of 0.76 carats/tonne (c/t).

Future production from kimberlites Misery, Pigeon, Lynx, Jay, Sable and Fox will insure a long life for Ekati. The Jay pipe, for example, has 84.6 million carats of probable reserves and 90.6 million carats of indicated resources and is expected to begin initial production by 2020 with a mine life of 10-11 years.

The Diavik Mine represents one of the greatest engineering feats in Canada with the mining of three kimberlites within Lac de Gras by three open pits surrounded by rock-filled dikes or fences. The three open pits have been converted to underground operations and a fourth dike-enclosed open pit mine (A 21) is to start operations in late 2018.

The Snap Lake deposit is unique in that it is an underground operation directed at an inclined dike or sill rather than the conventional open pit like a majority of diamond mines worldwide.Â  The dike averages 2.5 metres thick and dips 12 to 15 degrees northwesterly. The mine produces 1.4 million carats/year from ores grading 1.2 c/t. Located 250 km north of Yellowknife and accessed by winter road and by air year round, it is 100%-owned by De Beers Canada. In December 2015, De Beers put Snap Lake on care and maintenance.

Ontario: The Victor Mine (owned 100% by De Beers Canada) is the province’s only producing mine and is located in the James Bay Lowlands of Northern Ontario, 90 km west of Attawapiskat and is accessed by winter road.

The mine produces 650,000 carats/year from ores grading about 0.23 c/t. When put into production in 2008, it had a mine life of 10 years at a 2.7 million tpy milling rate. With a cluster of some 15 defined kimberlites, studies are underway to evaluate the nearby Tango Extension kimberlite and extend the mine life of the property.

The two projects with production scheduled for commissioning in the second half of 2016 with full production in 2017 are Gahcho KuÃ© in the NWT and Renard in Quebec.

Gahcho KuÃ© is located 280 km northeast of Yellowknife and serviced, like its three neighbouring mines, by a connection to the Lac de Gras ice road during winter. The project consists of a cluster of four diamondiferous kimberlites, three of which have a probable mineral reserve of 35.4 million tonnes grading 1.57 c/t for a total diamond content of 55.5 million carats.Â  Â Â Â Â Â Â  Whereas the Phase I mine plan will focus on recovery of diamonds from those reserves over an estimated 12 years, a Phase II plan will focus on developing inferred resources of 11.3 million tonnes grading 1.64 c/t that is expected to yield a further 18.4 million carats over an additional five years. A Phase III plan will tackle development of a deeper part of the Tuzo pipe, extending total mine life to some 20 years.

Other targets exist on the property including a fourth diamond-bearing kimberlite, Â Tesla, Â which has indeterminate resources but is expected to yield a viable deposit to be mined in the future along with the deep extensions of the 5034 and Hearne kimberlites, making this project one of the largest diamond mines globally under construction and one of Canada’s major high-grade and expected long lived mines. Plant construction is estimated to be completed in March 2016, with commissioning mto start and full-scale commercial production beginning in the Q3 2016. The project is a joint venture between De Beers Canada, 51%, and Mountain Province Diamonds [MPV-TSX; MDM-NASDAQ], 49%.

These resources are contained within the Renard 2, 3, 4, 65 and 9 kimberlites and the Lynx and Hibou kimberlite dykes. Targets for future exploration (TFFE) from additional kimberlites for the Renard Project amount to 33.0 to 71.1 million carats from kimberlite ores grading between 20 cpht and 168 cpht. The current plan is based on a mine life of 11 years with probable mineral reserves of 17.9 million carats and a production of 1.6 million carats/year at an average valuation of US $190 /carat. Potential for finding additional resources beyond those established to date is considered favourable based on drilling of pipes Renard 2 and 3 down to depths of 1,000 metres. Renard is poised to become unique by establishing diamond resources at depths yet to be achieved in Canada and to become a major diamond producer.

The majority of diamond exploration is taking place in Canada’s north due to the extensive exposure of Precambrian rocks with ages of about 2.5 billion years which have shown to be the most favourable host based on its stable craton characteristics. Southern Canada is overlain by younger post-Precambrian strata making it difficult to see through the cover in search of the targeted diamond-bearing kimberlite. There are diamond projects in the advanced stages of exploration taking place in the Northwest Territories, Nunavut and Saskatchewan.

The Kennady Diamonds [KDI-TSXV] 100%-owned Kennady North Project adjoins the Gahcho KuÃ© Mine and comprises extensively investigated diamond-bearing kimberlites – Kelvin and Faraday – Â in addition to pipes Doyle and MZ, plus a number of geophysical anomalies with kimberlite signatures. The 2015 program included detailed drilling of a second kimberlite at Faraday called Faraday 2 which, in conjunction with Faraday 1 and Kelvin, constitutes three viable kimberlites. The bodies are referred to blows rather than the conventional term of pipes due to their irregular morphology or shape and association with a kimberlite sheet or sill. The dimensions of these bodies appear sizeable and this, combined with favourable diamond recoveries from both core and reverse circulation drilling, indicates that the combined extent of the kimberlites have economic potential.

A recent caustic fusion analysis of a 0.93-tonne sample from drill core from the Kelvin North lobe returned a grade of 3.55 carats/tonne of commercial-grade diamonds. Drilling to date and geophysical surveys have established a Kelvin/Faraday corridor expected to yield a resource with diamond grades in the range of 2-2.5 carats/t in some 13-16 million tonnes. Recent diamond values of parcels from a 443-tonne bulk sample ranged from US $56-$123/carat. A further 500-tonne bulk sample is planned for winter 2016 in order to provide a larger, more representative sample of the diamond population to allow for an acceptable valuation of diamonds for resource estimation and mine planning purposes.

The Qilalugaq Project, located 9 km north of Inuit community of Naujaat (Repulse Bay) on the Melville Peninsula, is owned by North Arrow Minerals [NAR-TSXV; NHAWF-OTC], 80% and Stornoway Diamonds, 20%. Inferred mineral resources are 48.8 million tonnes grading 0.536 c/t with a total diamond content of 26.1 million carats. The Qilalugaq kimberlite surface area is large by northern Canada standards, estimated to be 12.5 hectares, and features a 9% population of yellow diamonds. The company has a second diamond project on Melville Peninsula – the Mel Project – that has delineated two unsourced kimberlite indicator mineral (KIM) trains containing a large population of pyrope and eclogitic garnets and ilmenite.

The Chisliak Project is on South Baffin Island 120 km northeast of Iqaluit and represents the main diamond project of Peregrine Diamonds [PGD-TSX]. Discovered in 2008, to date 71 kimberlites have been identified of which eight pipes are considered potentially economic. The majority of investigation has been directed to pipe Ch-6 with inferred resources of 8.57 million carats in 3.32 million tonnes grading 2.58 c/t. An additional 3.20-4.38 million tonnes of kimberlite classified as a Target for Further Exploration has been identified at CH-6.Â  A 1,013.5-carat parcel was model priced at US $162-$236/carat.

North Arrow Minerals, 80%, and Stornoway Diamond, 20%, discovered the newest diamond field in Canada in north-central Saskatchewan about 140 km east of La Ronge – the Pikoo Project. A 2011 regional geochemical indicator sampling program identified multiple kimberlite targets. In 2013, seven kimberlite occurrences have been drilled identified, four of which are diamondiferous. Kimberlite PK150 is the most significant discovery to date; about 10-15 metres wide, at least 150 metres in strike length, and traceable to 199 metres in depth. A total of 1,232 diamonds have been recovered from 531.1 kg of kimberlite drill core. Drilling of the known kimberlites plus new targets will be drilled in 2016.