Global demand for energy is rising with many countries looking to install new baseload power plus there are new demands such as the electrification of transportation. On the supply side of the equation though environmental concerns including climate change are driving the call for more so called “green energy” sources as alternatives to the traditional fossil fuel supplies of coal, oil, and gas. Renewables such as wind and solar have been gaining ground in the past decade or so but none of these can yet provide enough power to fully replace that derived from carbon sources. Hydro works where there is adequate supply of water and convenient topography. So not everywhere. The one that could (work anywhere that is) – nuclear – has had a bad rap for many years conjuring up visions of mushroom clouds and Chernobyl like disasters in the minds of many. The last big nuclear accident that occurred at the Fukushima power plant in Japan because of an earthquake and tsunami in March 2011 saw a drop in nuclear-power generation of about 11% and caused curtailment in the development of new nuclear reactors worldwide.

Today though, there are many proponents of nuclear power that believe a new renaissance is here and currently nuclear power generates about 20% of the total electricity consumed in the USA, up from 10% in 2011. There is a recognition now as many countries announce net-zero carbon targets, that nuclear will be needed more and more to sustainably achieve electrification and decarbonization goals.

President Biden recently convened with 40 world leaders in a virtual climate summit where he pledged that the US aims to cut carbon emissions by as much as 52% by 2030. Numerous other regions announced similar increased targets, notably Canada, Japan, the European Union (EU) and the United Kingdom:

The foundation of nuclear energy is harnessing the power of atoms. Both fission and fusion are nuclear processes by which atoms are altered to create energy. The word fusion means “a merging of separate elements into a unified whole”. Nuclear fusion takes place when two low-mass isotopes, typically isotopes of hydrogen, unite under conditions of extreme pressure and temperature. Along with this, an enormous amount of energy is released, several times the amount produced from fission. Fusion is what powers the sun.

But so far, harnessing the nuclear fusion process to generate electricity has proved elusive due to the massive challenges associated with creating and controlling the extreme conditions required to emulate the sun.

The word fission on the other hand means “a splitting or breaking up into parts” and nuclear fission releases energy by splitting atoms as opposed to fusing them together.  The resulting energy released is then used to heat water in nuclear reactors and ultimately produces electricity. Most nuclear power reactors use an isotope of uranium known as uranium-235 as fuel.

Uranium is found in small amounts in most rocks, and even in seawater. Uranium mines operate in many countries, but more than 85% of uranium is produced in only six countries: Kazakhstan, Canada, Australia, Namibia, Niger, and Russia.

The price of uranium is driven by nuclear power demand, global supply and inventories, and macroeconomic and political factors. Currently there is a stand-off between buyers and users as the price of uranium remains well below US$40 per lb. – a benchmark that the price needs to rise above to stimulate the market. Producers are unwilling to restart production until they have long-term contracts and buyers are unwilling to sign long-term contracts at levels above current spot prices.

But a sharp increase could be coming as the stars align around several factors:

Given the long lag time between exploration, discovery, and development of a producing mine (at least 5 to 10 years), timing of each stage is critical. The time to be in uranium exploration would be appear to be now. Two such Canadian companies have recognised this:

Azincourt Energy Corp. [AAZ-TSXV, AZURF-OTC] is a Canadian resource exploration and development company with a focus on commodities, including uranium and lithium, that are key to the evolving clean energy sector

Azincourt’s flagship asset is the East Preston uranium project in Saskatchewan, which the company is developing with partner Skyharbour Resources [SYH-TSXV] (Dixie Gold also holds a small portion of the project).

The properties, collectively known as the Escalera Group, were acquired in February 2021. 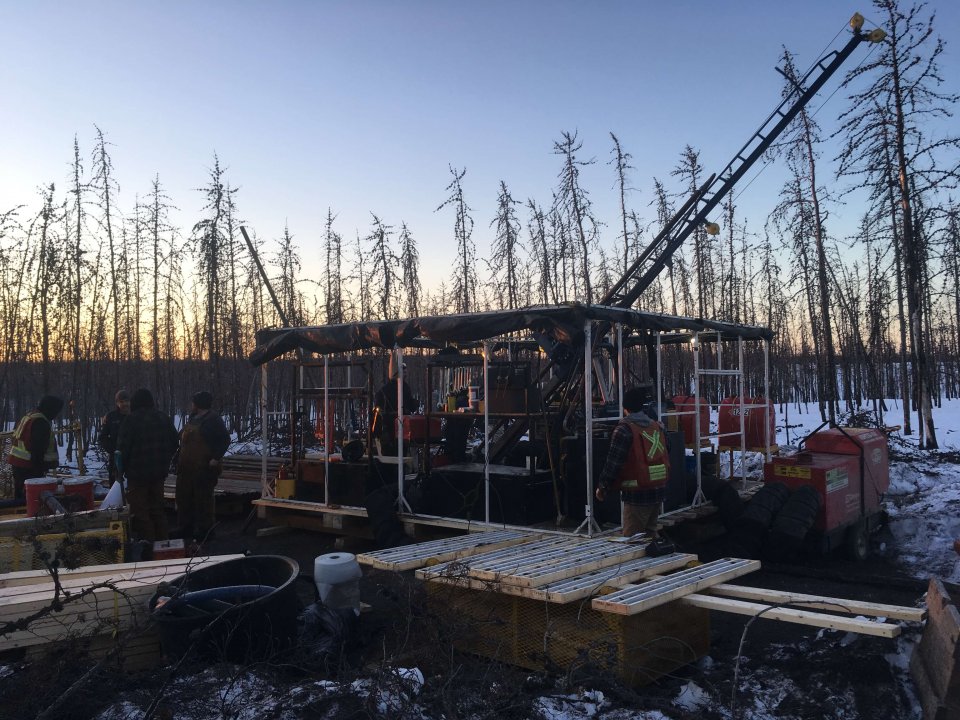 The addition of uranium/lithium assets in Peru positions Azincourt for growth that is tied to developments in the key nuclear fuels and battery metals sectors at a time when clean energy initiatives are driving a paradigm shift in how future energy needs will be met.

However, the immediate emphasis is on East Preston, which is located in the prolific Athabasca Basin, a world class district best known as the world’s leading source of high-grade uranium and contributor of 20% of the world’s supply.

Azincourt controls a 70+% interest in the 25,000-hectare Eastern portion of the Preston project as part of a joint venture agreement with Skyharbour and Dixie Gold. 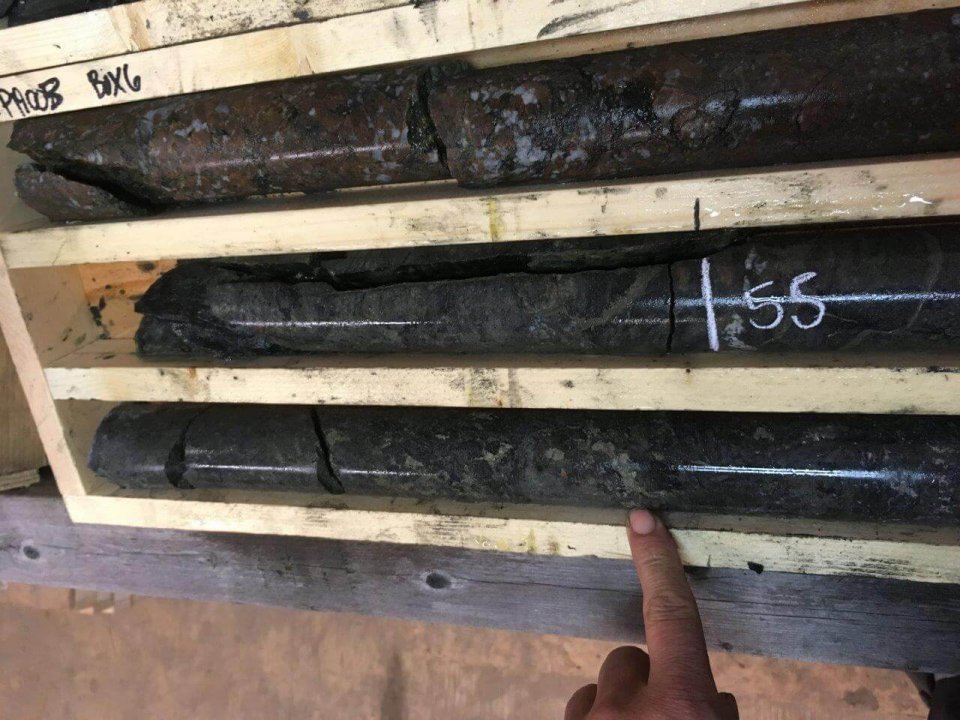 East Preston is near the southern edge of the western Athabasca Basin, where targets are in a near surface environment without Athabasca sandstone cover. Therefore, they are relatively shallow targets but can have great depth extent when discovered.

Azincourt recently raised $4.2 million from a private placement financing and is preparing for a substantial amount of drilling this year.

Exploration is ramping up after anomalous and elevated uranium levels were recently encountered in three of five holes completed in a drill program that was cut short due to an earlier than expected spring break-up.

The primary target area for the upcoming program continues to be the conductive corridor from the A-Zone through to the G-Zone where the elevated uranium levels were encountered.

The 2020 HLEM survey completed in December indicates multiple prospective conductors and structural complexity along the eastern edge of this corridor. 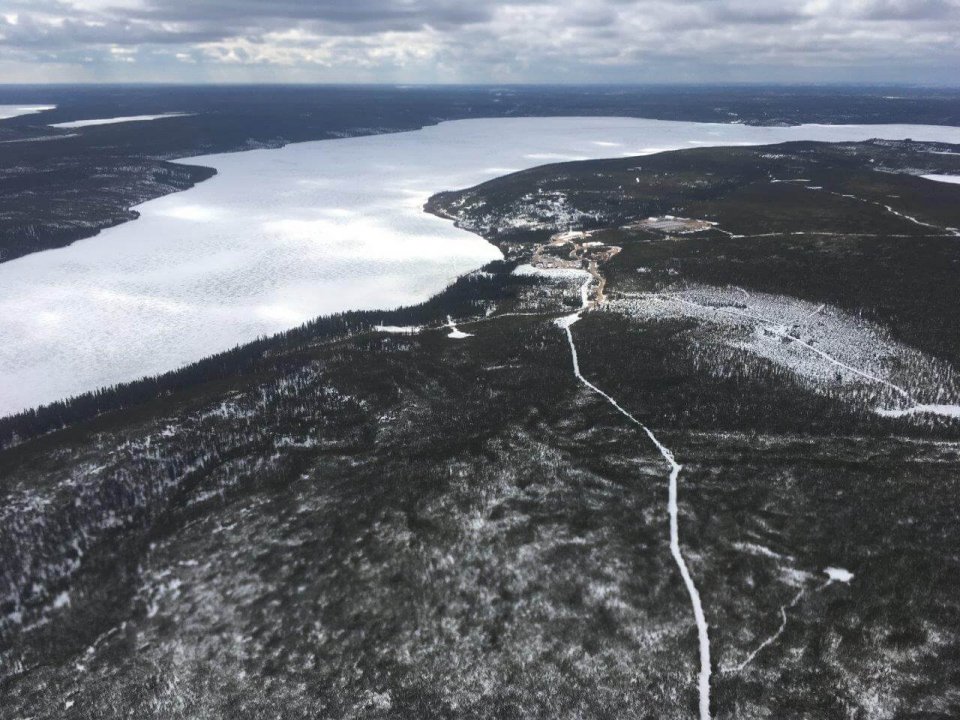 The company said preparation continues for an airborne radiometric survey, and approximately 7,000 metres of drilling, to consist of 30+ drill holes to be completed over the next six months.

Target selection for these programs will be refined based on the summer 2021 field activities.

Meanwhile, after completing the acquisition of all rights to the three uranium-lithium properties in Peru, Azincourt is planning to be back on the ground at the Escalera Group properties later this year.

The properties are located in a mineral-rich district where mining giants like Minsur and Rio Tinto Plc [RIO-NYSE] operate, as well as growing mid-tiers and juniors like Bear Creek Mining Corp. [BCM-TSXV, Lima] and Plateau Energy Metals Inc. [PLU-TSXV].

The Escalera Group consists of three concessions (Lituania, Condorlit, Escalera) covering a combined area of 7,400 hectares of prospective targets for volcanic hosted supergene/surficial uranium and lithium on the Picotani Plateau.

“Our early exploration efforts in Peru were positive, particularly in Escalera,” said Azincourt President and CEO Alex Klenman. “We were able to validate some highly prospective ground for both uranium and lithium mineralization. We are going to plan follow up exploration phases now and look to get back on the ground later this year.’’

At Escalera, the proposed uranium mineralization model is similar to that found at Macusani Uranium deposit (American Lithium) located about 100 kilometres to the northwest were uranium has dissolved and precipitated from source frothy volcanic debris flow rocks through an intricate interaction between geomorphology, groundwater movement and evaporation. 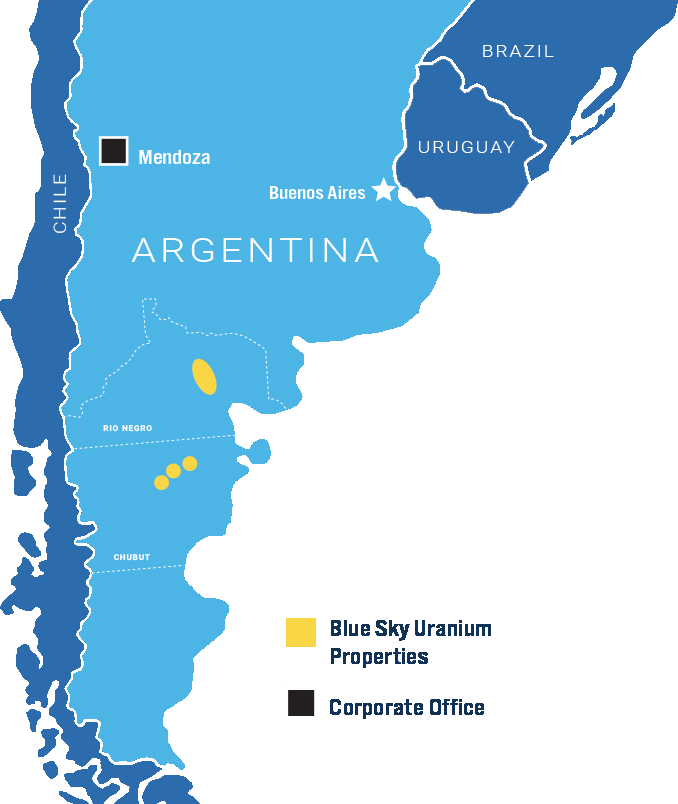 Blue Sky Uranium Corp. [BSK-TSXV; BKUCF-OTCQB; MAL2-FSE] is a discovery company that is positioning itself to benefit from a widely-expected rebound in the price of uranium.

The uranium industry has been struggling since a 2011 earthquake and tsunami in Japan disabled three reactors at the Fukushima nuclear plant, causing their cores to melt down, forcing Japan to shut down 50 nuclear reactors that remained intact.

The devastating repercussions in Japan sent uranium prices tumbling from US$72.63 a pound, and convinced some countries to decommission their nuclear reactors and switch to other fuels.

But optimism in the sector is driven by ongoing mine closures at time when construction of nuclear reactors around the world is increasing demand for uranium. Industry officials are confident that when the rebound occurs, it will be quick and significant.

In keeping with that plan, the company has launched a reverse circulation drilling program at its wholly-owned Amarillo Grande uranium-vanadium project in Rio Negro Province, Argentina.

On June 23, 2021, the company said it had completed the first tranche of the program which is expected to include a minimum of 4,500 metres at the high-priority Ivana Central (IC) and Ivana North (IN) targets, located 10 and 20 kilometres north, respectively of the company’s Ivana Deposit. 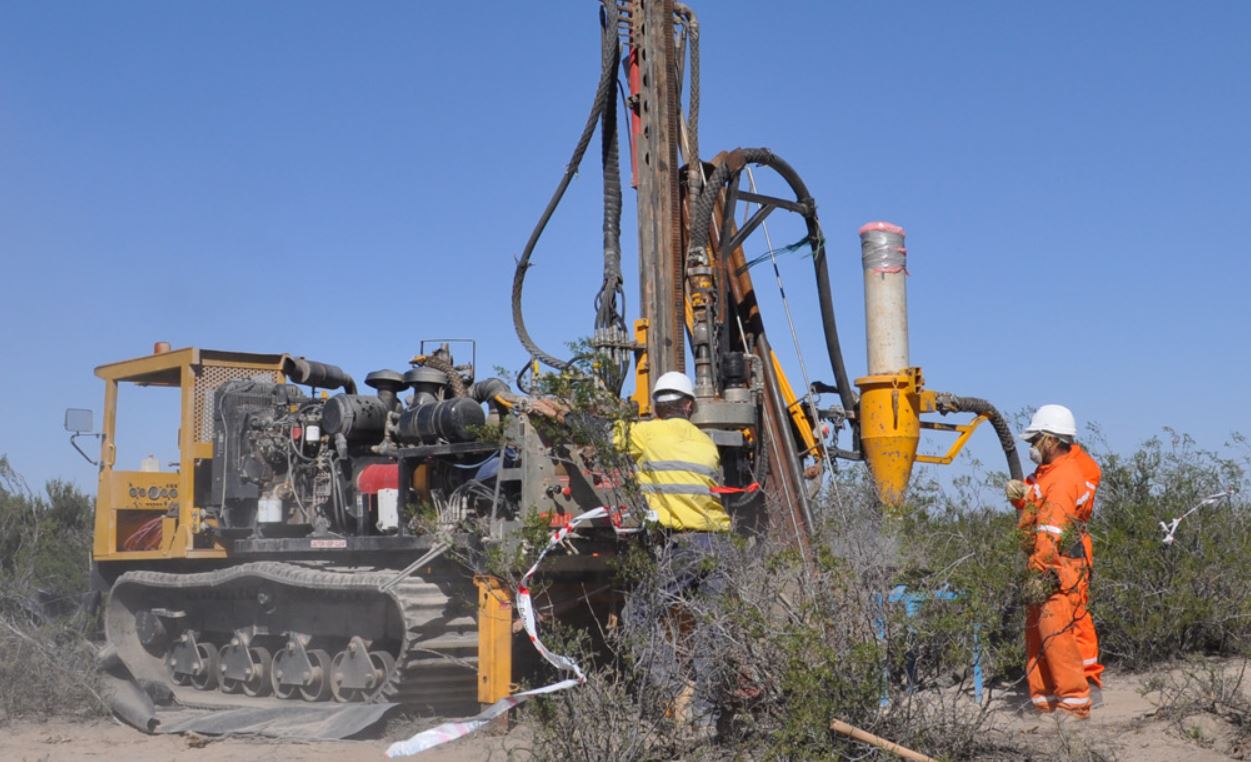 It said the drilling completed to date tested the Ivana North target area and consisted of 1,591 metres in 40 holes. The program tested an area covering 4.0 kilometres by 5.0 kilometres on roughly 400 to 800-metre centres utilizing a hydraulic drill rig.

The results, once received and interpreted, will be used to identify areas with elevated uranium concentrations within the current drill grid and to continue to vector towards reduction-oxidation (REDOX) traps with follow-up drilling.

“We are looking forward to receiving analytical results from the drilling to aid in evaluating the Ivana North target and to resuming our drilling program to test additional targets,’’ said Blue Sky President and CEO Nikolaos Cacos.

Blue Sky’s exploration and development strategy is led by a highly experienced management team, that includes President and founder Joe Grosso, who has been active in Argentina since the country opened its mining sector to foreign investment in 1993. 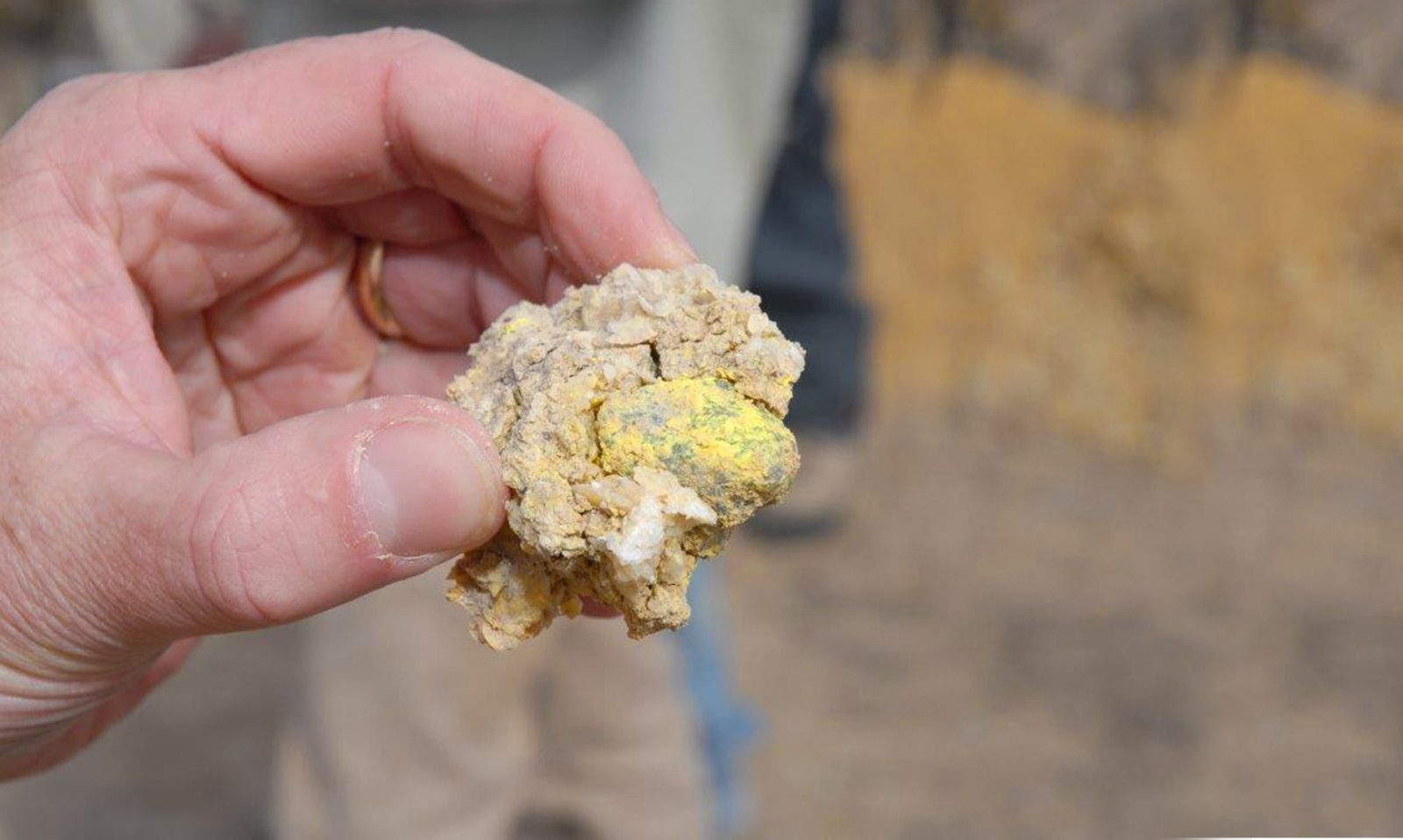 AGP includes several major target areas over a regional trend, with uranium and vanadium mineralization in loosely consolidated sandstones and conglomerates, at or near surface. The area is flat-lying, semi-arid and accessible year-round, with nearby rail, power and port access.

A positive preliminary economic assessment announced in February, 2019, envisages a surface mining operation that would deliver mill feed to a nearby processing plant or stockpiles at an annual rate of 4.7 million tonnes per year (13,000 tonnes per day).

The pre-production capital for such an operation is estimated at US$128.05 million, plus US$35.46 million of sustaining capital.

However, the Ivana deposit covers only a small fraction of the AGP property and the company is working to identify multiple new zones of uranium-vanadium mineralization throughout the large project area.

That optimism is based in part on a detailed review and reinterpretation of over 14 years of geological data which has outlined two areas that are thought to have the potential to host uranium-vanadium mineralization that is similar to Ivana.

Vanadium is growing in importance for key industrial manufacturing sectors, notably in steel and renewable energy.

The company is also planning and permitting to advance the Ivana Este and Quatro targets to the drill stage.

Blue Sky recently amended the final tranche of a non-brokered private placement financing consisting of units priced at $0.16 each. Subject to regulatory approval the financing is expected to raise $2.13 million for exploration at the company’s projects in Argentina.