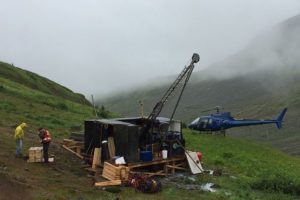 Hole FK18-10, the first of eight holes to be drilled this year, has intersected four separate high grade zones, with the best zone returning 38.7 g/t gold over 10 metres, including 62.4 g/t gold over 6.0 metres, starting at 114 metres down hole.

These results were announced in a press release on August 9, 2018.

“The area that we are drilling in is known for high grade,’’ said Aben CEO Jim Pettit, during an interview with Ellis Martin, host of The Ellis Martin Report.com, and an Aben shareholder.  Pettit said the company is drilling in an area where it has discovered strong precious and base metal mineralization at the North Boundary Zone.

However, the Aben CEO said the high-grade gold and base metal values in the first hole of the 2018 drill hole program has far exceeded the company’s expectations. He also said these results confirm the presence of a strong and robust mineralizing system at the recently discovered North Boundary Zone.

Forrest Kerr covers 23,000 hectares and is Aben’s flagship property. It is located in the Golden Triangle, a region that is hosts a number of significant mineral deposits, including Brucejack, Eskay Creek, Snip, Galore Creek, Copper Canyon, Schaft Creek, Red Chris and more.

Aben Chairman Ron Netolitzky was involved in the discovery of the Eskay and Snip mines and was named Canadian prospector of the year back in 1990. Both are located in northwest British Columbia in The Golden Triangle region.

Aben can earn a 100% interest over the entire claim group by spending $3 million on exploration by June, 2020.

“We are now looking at an area that extends 230 metres south to the historic high-grade Noranda drill hole from 1991 and although the geology is complex, we believe more drilling will delineate additional high grade mineralization,’’ Pettit said.

“The target areas in and around the Boundary Zone are relatively shallow and continue to provide strong discovery potential as we look to value-add the project using a systematic exploration methodology,’’ he said.

With drilling ongoing, the company is awaiting assay results from an additional seven holes, all of which were drilled at the North Boundary Zone. Aben will provide updates as results become available.