Aben Resources Ltd. (TSX-V: ABN) (OTCQB: ABNAF) (Frankfurt: E2L2) (“Aben” or “the Company”) has executed a formal option agreement (subject to regulatory approval) with Eagle Plains Resources Ltd. (TSX-V:”EPL”) whereby Aben holds the exclusive right to earn a 100% interest, less 2% Net Production Royalty (“NPR”) in the road-accessible Slocan Graphite Project located 34km northwest of Castlegar, British Columbia (the “Agreement”). Under terms of the Agreement, Aben must complete $1,000,000 in exploration expenditures, issue 850,000 common shares and make $150,000 in cash payments to Eagle Plains over a three year period. In addition, if at any time Aben or its successors report a resource of greater than 10Mt for tenures comprising the property, EPL will receive a one-time “Success Fee” of 500,000 Aben shares.

The Slocan Graphite project consists of 2,387 ha owned 100% by Eagle Plains with no underlying royalties or encumbrances. The property hosts several large flake graphite-bearing outcrops and float occurrences known as the Tedesco Zone, which is interpreted to extend over 2.0km. Eagle Plains recently completed fieldwork on the property and is encouraged by preliminary field observations, with the program focused on prospecting and geological mapping in underexplored areas of the property in an effort to locate extensions of the known graphite mineralized horizon and to better understand controls on mineralization. 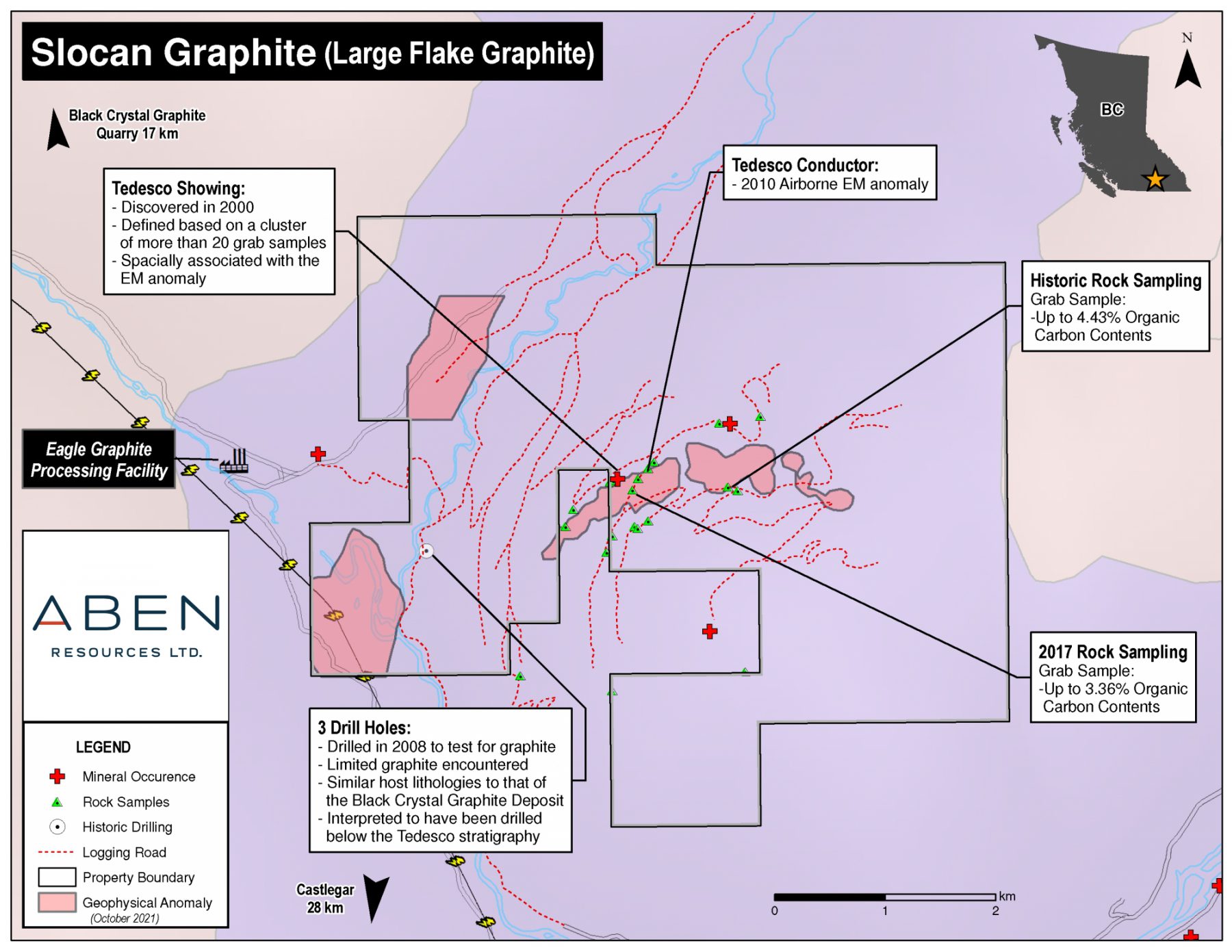 Graphite is a naturally occurring form of carbon and is an excellent conductor of both electricity and heat. It is becoming increasingly important as a critical strategic component in advancing alternative energy solutions including wind and solar power, hybrid vehicles and other alternative energy uses. It is also a mainstay of the steel production industry. Canada is currently ranked as the 5th largest supplier of graphite.

The Slocan Graphite Project benefits from excellent infrastructure including a high-voltage transmission line within 1.2 km of the property boundaries, an extensive network of forestry roads on and around the property, and an existing graphite processing plant and facilities located 1.5 km west of the property, owned by Eagle Graphite Corporation.

Graphite mineralization was initially discovered in logging road exposures in the late 1990’s.  Ground and airborne geophysical surveys were completed in the project area in 2000 and 2010 respectively.  Both surveys indicated strong conductive anomalies that correlate well with surface mineralization and are interpreted to extend along strike and down-dip of known occurrences.  A limited number of documented samples have been taken across the Tedesco horizon and analysed for carbon graphite ranging from trace values to grades of up to 3.36 and 4.43 per cent.

Graphite mineralization is hosted primarily in carbonate and calc-silicate lithologies within the Passmore Dome of the Valhalla Metamorphic Complex, a geologic setting consistent with a crystalline flake graphite deposit model.  Previous operators have estimated the mineralized horizon to be up to 50m thick, however they cite that it is difficult to determine due to a lack of surface exposure. The horizon has never been tested by diamond drilling.

Past workers in the area concluded: “Although the graphite occurrences at Tedesco are in the early stages of exploration, geological, assay, and geophysical data indicate significant potential to form an economic deposit” (BC Assessment Report 26537). Aben Resources is in agreement with Eagle Plains geologists who are of the opinion that the high-quality, large flake character of the graphite mineralization found to date, spatial extent of conductivity from a 2010 airborne electromagnetic (“EM”) survey, minimal historic exploration activity, excellent proximity to infrastructure and the favorable economic outlook for graphite as a strategic commodity make Slocan Graphite a compelling project for continued exploration.

“The Slocan Graphite Project is an excellent addition to Aben’s portfolio of Projects and will allow the Company to move into the very exciting EV  battery metals space that is currently experiencing exponential growth due to the electrification of the Auto Industry.”  Comments President and CEO Jim Pettit.

Management cautions that historical results were collected and reported by past operators and have not been verified nor confirmed by a Qualified Person but form a basis for ongoing work at the Slocan Graphite property. While the company considers the above historical information to be relevant to investors as it may indicate the presence of mineralization, the reader is cautioned that a Qualified Person has not done sufficient work to evaluate the potential of the property to contain an economic deposit and that there is no certainty that the property contains a graphite deposit.

Cornell McDowell, P.Geo., V.P. of Exploration for Aben Resources, has reviewed and approved the technical aspects of this news release and is the Qualified Person as defined by National Instrument 43-101.

Taiga and Aben have agreed to terminate the Option Agreement on the Chico property, dated December 9th, 2016 between Aben and Eagle Plains Resources Ltd. and subsequently assigned to Taiga on June 7th, 2018 (the “Option Agreement”). Under the terms of the agreement, Taiga has agreed to pay Aben $CDN 200,000 in cash to terminate the Option Agreement, effective immediately. Aben will no longer have any rights to the Chico Property nor obligation to make cash payments, issue common shares or incur exploration expenditures. Moving forward, Taiga will control a 100% interest in the Chico property, subject to any underlying third-party royalties.  Aben and Taiga share one common director, who has been recused from voting on the Option Agreement termination.

Aben Resources is a Canadian gold and graphite exploration company with exploration projects in British Columbia, Ontario, and the Yukon Territory. Aben is a well-funded junior exploration company. Cornell McDowell, P.Geo., V.P. of Exploration for Aben Resources, has reviewed and approved the technical aspects of this news release and is the Qualified Person as defined by National Instrument 43-101.