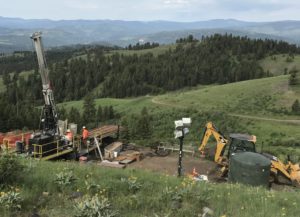 Adamera Minerals Corp. (TSX-V: ADZ) announce that it has intersected a massive magnetite zone with significant sulfides in the first drill hole on the Oversight property in Washington State. This zone is distinctly similar to the ore zones described in the Overlook Gold Mine. Assays are pending.

Drill hole OS17-1, intersected 8 metres of massive magnetite with sulfide mineralization between 87.5 metres and 95.5 metres. The stratigraphy overlying and underlying the Oversight magnetite-sulfide zone is also similar to the described stratigraphy at Overlook and includes zones with sulfide and quartz veining. Overlook is located 300 metres west and approximately 100 metres deeper than the Oversight target.

“It is impressive that our first hole intersected the modelled target, a magnetite sulfide horizon. It is this horizon that typically but not always carries high-grade gold values in the Overlook Mine. Whether this intersection yields high grade gold values or not, it is solid proof of concept that our exploration methodology is working. By targeting conductors with a magnetic response and supportive soil chemistry we are capable of finding new sulfide zones at depth,“ states Mark Kolebaba, President and CEO of Adamera Minerals Corp.

Drill hole OS17-1 was drilled at an angle of -75o to intersect the Oversight VTEM conductor at a modelled depth of 70 metres, the actual intersection was at 84 metres vertical depth. The Oversight VTEM anomaly is a larger target that will require more then one drill hole to be fully testd. A downhole electromagnetic survey will be completed on drill hole OS17-01 to define the lateral and depth extent of the mineralization prior to additional drilling.

The next drill hole is testing the eastern extent of a VTEM conductor associated with the Overlook deposit which appears to be under explored.