Kinder Morgan Canada’s [KML-TSX] stalled Trans Mountain pipeline expansion is back in the news Wednesday March 21 after Alberta Finance Minister Joe Ceci said the province is banking on revenue from the oil pipeline to balance the province’s budge within five years. 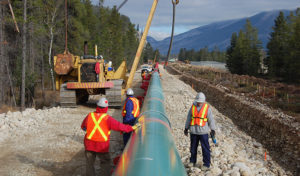 Ceci says revenue from the yet-to-be built expansion, along with expected replacement Enbridge Inc. [ENB-TSX] pipeline in Wisconsin will be factored into forecasts in a budget that is due to be tabled on Thursday.

The move comes just weeks after Alberta Senator Doug Black warned that not having access to energy markets is costing Canada billions of dollars and the expansion of the Trans Mountain pipeline system between Edmonton, and Burnaby, British Columbia,  is a critical solution to this problem, he said.

That is because it was proposed in requests form oil companies to help them reach new markets by expanding the capacity of North America’s only pipeline with access to the West Coast.

The Government of Canada granted its approval for the Trans Mountain Expansion Project in November 29, 2016.  The National Energy Board has also concluded that the pipeline expansion project is in the Canadian public interest.

However, Trans Mountain Expansion faces significant hurdles, including opposition from British Columbia Premier John Horgan who has vowed to “use every tool in the toolbox” to prevent it from going ahead.

British Columbia’s ruling New Democrats have asked to courts to clarify whether or not it can use provincial powers to restrict Alberta’s bitumen flows, while conducting scientific studies to determine the environmental impacts of bitumen oil spills.

Alberta Premier Rachel Notley retaliated by threatening to cut off oil and gas shipments to B.C. unless the B.C. government backs off from its efforts to block the pipeline.

Public concerns about the environmental impact recently sparked a 5,000-person march against the project as well as the arrest of about 50 protesters.

Meanwhile a B.C. judge has order a Kinder Morgan protestor who was arrested this week to remain in jail pending a contempt of court hearing in April.

Suntree Johnson Larue was one of three people who were arrested at the project site in Burnaby, on Monday, March 19, 2018, and held in custody.

Lawyers for Trans Mountain wanted a contempt of court hearing to proceed immediately after the arrest. But a report by The Vancouver Sun says a lawyer for one of the protesters said she had no time to prepare for the hearing. Larue will remain in custody until a contempt hearing on April 9.

Incidents of civil disobedience are to be expected, Senator Black said during a recent interview with Resource World.  “But this is a country that is built on the rule of law. People are entitled to their point of view. But they are not entitled to disrupt civil society. Laws must be obeyed.”

“Seeking the opinion of the Supreme Court of Canada can move the Trans Mountain project forward,” he said. “The Government of Canada should act now.”

For her part, Premier Notely has said Trans Mountain is critical to Canada’s energy future. She is planning to ramp up the pressure on Horgan by introducing legislation in the coming weeks to give her the power to curtail oil shipments to B.C. in retaliation.

She has said pipeline bottlenecks and limited access to overseas markets are forcing Alberta’s crude to sell at a discount, costing thousands of jobs and leaving billions of dollars of profit on the table.

It should be noted that the Canadian government approved Enbridge’s Line 3 replacement pipeline in 2016. It will fully replace 1,660 km of Line 3 with new pipeline and associated facilities on either side of the Canada, U.S. international border between Hardisty, Alberta and Superior Wisconsin. The Canadian component is being built at a cost of $5.3 billion.

Washington State Governor Jay Inslee has also opposed the twinning of the Kinder Morgan pipeline which has been in operation since 1953 with no serious ocean spills. Since Washington State has no permanent pipeline connections to the U.S. oil market, Washington’s refineries receive oil by tankers going down the B.C. coast from Alaska and through the Strait of Juan de Fuca – some 500 tankers per year. During 2017, inbound oil tankers delivered 46% of Washington State’s crude imports, including diluted bitumen.