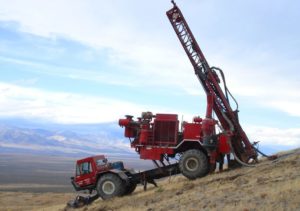 In connection with the Offering, Goldcorp Inc. (G: TSX) is undertaking a strategic investment in ALLEGIANT.  Goldcorp will purchase 5,923,819 ALLEGIANT common shares at CAN$0.35/share for gross proceeds to ALLEGIANT of CAD$2,073,337.  Post-closing Goldcorp will own 9.99% of the issued and outstanding common shares of ALLEGIANT on a non-diluted basis.

Proceeds of the Offering will be used to carry-out high-impact “discovery” exploration drill programs on six of ALLEGIANT’S high-priority exploration projects, located principally in the mining-friendly jurisdiction of Nevada.  Over a 10-month period starting in August 2018, the following six gold exploration projects will be drilled:

Closing of the Offering is anticipated to occur in July, subject to customary closing conditions, including but not limited to, title opinions and the receipt of applicable regulatory approvals, including approval of the TSX Venture Exchange.  All shares issued in connection with the Offering will be subject to a four month hold period. Finders’ fees will be payable on a portion of the Offering and will consist of cash of 6% of the gross proceeds received from the sale of the shares.

Fort Capital Partners acted as financial advisor with respect to the strategic investment by Goldcorp and as a capital markets advisor.

ALLEGIANT is led by CEO Andy Wallace, who is credited with discovering a number of multi-million-ounce gold mines in Nevada.  ALLEGIANT owns 100% of 14 highly-prospective drill-ready gold projects in the United States, 11 of which are located in the mining-friendly jurisdiction of Nevada.  ALLEGIANT’s flagship Eastside project hosts a large and expanding gold resource, is district scale, and is located in an area of excellent infrastructure.  Preliminary metallurgical testing indicates that both oxide and sulphide gold mineralization at Eastside is amenable to heap leaching.

Andy Wallace is a Certified Professional Geologist (CPG) with the American Institute of Professional Geologists and is a Qualified Person as defined under National Instrument 43-101 – Standards of Disclosure for Mineral Projects. Mr. Wallace has reviewed and approved the technical content of this press release.

ON BEHALF OF THE BOARD,