Almadex Minerals Limited (“Almadex” or the “Company”) (TSX VENTURE: AMZ) (OTCQX: AXDDF) is pleased to announce it has received assay results from hole EC-17-029 of the 2017 Norte drilling program. EC-17-029 was drilled to target and expand the high grade mineralization and intersected high grade mineralization and multiple zones of intense stockwork veining and potassic alteration accompanied by significant copper and gold grades. Highlights include the following intercepts all of which are also shown on the attached plan and section: 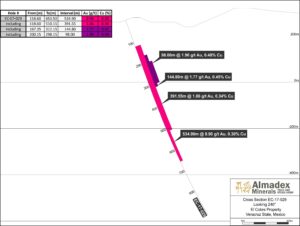 J. Duane Poliquin, Chairman of Almadex commented, “Since the Norte Zone discovery we have been carrying out a systematic drill campaign to define this target. To date the program has been based on large step-outs which have yet to define the limits of mineralisation. Future Norte drilling will also focus on defining the high grade zone that is emerging from the drilling results. Continuous mineralization in hole 29 starting close to surface and continuing for over half a kilometer shows the Norte Zone is developing significant tonnage as well as good grades. Elsewhere on the project first pass Encinal Zone drilling is complete and while we await assays from this work a drill is now being moved to the newly discovered Raya Tembrillo target within the large Villa Rica zone for the very first drill hole there.”

About the El Cobre Project

The El Cobre Project has a total area of 7,456 hectares and is located adjacent to the Gulf of Mexico, about 75 kilometers northwest of the major port city of Veracruz, Mexico and has uniquely excellent infrastructure. The project area is situated 200 meters above sea level with extensive road access and is located less than 10 kilometers from a power plant, highway, gas line and other major infrastructure. Major power lines cross the property area. Almadex has its full drill permits from SEMARNAT and has land access agreements in place. The land ownership is private over most of the pro 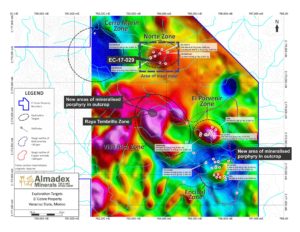 ject area, has previously been cleared and is used for local agricultural purposes.

El Porvenir Zone: Drilling has demonstrated that the system persists at least to 400 m depth. Significant copper and gold grades were intersected such as 0.16% Cu and 0.39 g/t Au over 290 m in hole DDH04CB1. In addition, hole EC-13-004 intersected 0.23% Cu and 0.36 g/t Au over 106 m, to a depth of 504 m, again indicating potentially significant mineralization at depth. No drilling has been conducted at El Porvenir since 2013.

Encinal Zone: Hole CB5 intersected a highly altered breccia pipe containing fragments of stockwork veining and porphyry mineralization across which 18.28 meters returned 1.42 g/t Au and 0.10% Cu. The breccia pipe occurs in a large alteration zone, IP chargeability high and magnetics low which has not been tested to depth. On June 19, 2017 Almadex announced that a new area of exposed stockwork quartz veining and gold mineralization had been identified in the Encinal Zone. On June 29, 2017 Almadex announced the results of initial drilling on this exposed stockwork (Hole EC-17-025) which returned results including 34.47 meters grading 0.73 g/t Au and 0.20% Cu. Almadex is currently following up these results with some additional drilling at Encinal. 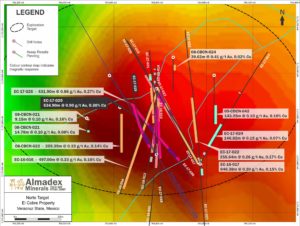