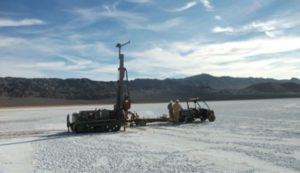 A total of 29 samples is reported with the highest-grade sample being 426 mg/L Li. The average of the samples was 254 mg/L Li and the lowest grade sample was 10 mg/L Li. The previously reported low magnesium levels continue to be the case with magnesium grades being sub 0.1 mg/L on average. Lithium grades in excess of 150 mg/L were returned in 26 of 29 shallow auger drill holes.

American Lithium developed a new method for this second round of sampling. Previously, “near-surface brines were sampled using a conventional hand-held auger to sample subsurface brines at a depth of 78” (2m), The brine was sampled at the bottom of the auger hole and then separated from residual clays before being sent for analysis… Instead of an auger system, a four-inch diameter pipe is driven into the ground to a depth of approximately 55” (1.4m) and then pulled out of the hole. A 2.5” (6.3cm) perforated PVC pipe is placed in the hole to keep it open while clay solids settle to the bottom of the hole. The brine is then sampled just above the settled material at the bottom of the hole.”

“These sampling results are very consistent with the previous series of auger results. We believe they demonstrate the robust lithium distribution throughout the near surface of the North Playa. Exploration results from the North Playa have thus far have exceeded our expectations.” commented, Michael Kobler, COO of American Lithium. “American Lithium will continue to focus on exploration on the Fish Lake Valley and Clayton Valley projects as we work toward our goal of becoming Nevada’s premier lithium exploration company.”