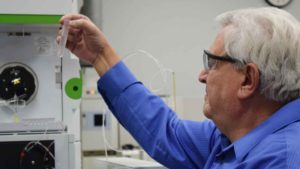 American Manganese Inc. [AMY-TSXV, AMYZF-OTCPINK] said Friday December 14 that it has achieved a key milestone in its bid to become an industry-leading miner of cathode metals from spent lithium-ion batteries. The company said the United States Patent Office has issued a notice of patent allowance for its battery recycling technology.

“The Notice of Allowance is formal notification indicating that the examination of the invention has been completed by the US Patent and Trademark Office and allowed for issuance of the US patent,” the company said in a press release.

“Allowance of this patent is a significant milestone for the company as the invention is now secured as a key asset that can be exclusively capitalized,” said American Manganese CEO Larry Reaugh.

The announcement comes as the impact of global warming is putting severe pressure on governments everywhere to reduce carbon emissions. That in turn is expected to result in sharply increased production and sale of electric vehicles.

American Manganese has said it recognized early on that significant growth in the electric vehicle market will eventually lead to supply strains in materials used to make lithium-ion batteries.

In an interview with Resource World Magazine, Reaugh said the company hopes to capitalize on the expected electric vehicle revolution through being able to take EV batteries, convert them into cathode materials of high purity that can go directly back into a battery.

“This would avert the release of anything into the environment,” he said.

Needing to secure a deal with a cathode scrap provider, American Manganese recently signed a memorandum of understanding (MOU) to form a partnership with Battery Safety Solutions B.V. (BSS). BSS is a private Dutch company that specializes in the collection, discharging and dismantling of lithium-ion batteries.

Aside from its quick discharging process, BSS is expected to bring to the partnership its expertise in European marketing, access to customers, and experience with safe handling.

During the interview with Resource World, Reaugh said the next stage would be to conduct pilot tests to show that the company can scale up to large scale production.

The betting is that if American Manganese can show a quick payback from pilot testing, it will be able to raise the funds required to build larger plants in the future.

Mining metals from batteries marks a change of focus for American Manganese which had previously been engaged in trying to mine manganese from low-grade ore at a deposit in Arizona.

However, when a drop in the price of manganese made the Arizona project uneconomic, the company mothballed the project and contracted Kemetco Research of Richmond, B.C. to develop the battery mining technology into an efficient recycling process.

Pilot tests on cathode scrap provided by a U.S. metal recycler will be conducted at a pilot plant set up at Kemetco’s laboratories. The pilot plant could be in operation as early as the end of this month.

Meanwhile, with the receipt of the notice of patent allowance, American Manganese now believes it is ahead of known competitors.