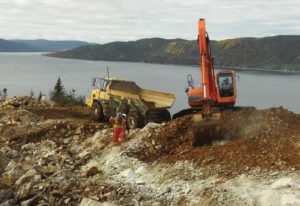 Anaconda Mining Inc. [TSX:ANX] is pleased to announce it has received the results of its first drill program at the Company’s Goldboro Project in the Province of Nova Scotia, which contains a Measured and Indicated Mineral Resource of 457,400 gold ounces at a grade of 5.57 grams per tonne (“g/t”) gold (2,556,000 tonnes) and an Inferred Mineral Resource of 372,900 gold ounces at a grade of 4.35 g/t gold (2,669,000 tonnes) (2.0 g/t gold cut-off, see press release of March 3, 2017).
The five-hole diamond drill program, totaling 649 metres, was conducted in the Boston Richardson and East Goldbrook gold systems of the Goldboro Deposit (Exhibit A). Multiple occurrences of visible gold and assays with high-grade tenor were observed in all five holes. Assay highlights from the program, including the highest grades yet recorded at Goldboro, are as follows:

See Table 1 below for a summary of assay results from the drill program.

“The discovery of the highest-grade gold intercepts at Goldboro, amongst multiple other, high-grade intercepts, and the recognition of the growth potential down-plunge and along strike, make the Goldboro Project an exciting opportunity for Anaconda, its shareholders and other stakeholders. As with historical exploration work, we continue to see significantly high-grades and very good thickness in the drill core. We are encouraged by the predictable geological model, which gives us confidence in the mineral resource and our ability to expand the deposit. Over the coming months, we expect to plan and initiate additional drilling to demonstrate the mineral expansion potential of Goldboro.”

The Boston Richardson gold system of the Goldboro Deposit is host to 15 tightly-stacked, high-grade, gold-bearing vein zones. Holes BR-17-01 to BR-17-03 are located within the core of the Boston Richardson system and intersected up to 7 of the 15 vein zones, which are characterized by thick gold bearing quartz veins and thin vein arrays within highly altered argillite, separated from the neighboring vein zones by un-mineralized greywacke as predicted by recent geological modelling. The high-grade assays returned from these drill holes are of a tenor consistent with previous drill programs on the deposit as well as with recent geological and resource modelling, and confirms the validity of the geological and resource models.
The East Goldbrook gold system is characterized by 7 stacked vein zones and is generally drilled at a broader spacing (~100 metres) than Boston Richardson. Hole BR-17-05 intersected 5 of the 7 East Goldbrook vein zones including vein zones 3 and 4, which appear to extend 40 and 100 metres, respectively, farther to the west beyond what has been currently modelled. Hole BR-17-04 within East Goldbrook contains the highest-grade intercepts within the entire Goldboro Deposit as shown in the highlights above.

Based on all historic and current exploration information related to the Goldboro Deposit, Anaconda believes the deposit continues at depth. Historic drill results from some of the deepest and eastern most drilling at the margins of the Boston Richardson and East Goldbrook gold systems returned significant values both in grade and width, as demonstrated in the highlights of historic drill results below and the sample of visible gold shown in Exhibit C. Consequently, Anaconda believes that gold mineralization will continue at depth along the East Goldbrook, Boston Richardson and West Goldbrook gold systems and down-plunge of the current resource.

Assay highlights from selected historic drill core at depth at the Goldboro Deposit: