The level of competition in the global industry for rare earth elements (REE) is tightening, as indicated by recent statements by the US and the European Union to reduce their dependence on China. The same plans have also been recently announced by Russia.

As the UK Financial Times published, both the US and the EU plan to return to being leading players in the global REE mining sector, currently dominated by China.

Since the beginning of 2000s, production of REE in the US and the majority of European countries have been almost completely suspended, as most of them shifted to imports from China.

However, the recent trade wars between the US and China and the existing global geopolitical uncertainties have forced the governments of leading countries to consider resuming REM mining.

One such country is Russia, which recently decided to join the race. According to recent statements made by Aleksey Bezprozvannykh, Russian Deputy Minister of Industry and Trade, a number of REE projects, both mining and processing, totaling US$1.5 billion will be launched in Russia.

At present, Russia ranks as the world’s fourth country in terms of REE reserves; however, acceleration of exploration may result in the discovery of new reserves.

According to some Russian sources, total reserves of REE are currently estimated at 12 million tonnes, being equivalent to 10% of the global reserves. At the same time, the actual Russian share in global REE production does not exceed 1.3%. State plans call for increasing these figures up to 10%.

Preparations are now underway for increasing REE production. Meanwhile, there is a reduction of taxes on mining of rare metals from 8% to 4.8% as well as preliminary approval of benefits for mining and processing companies.

In the next several months, the Russian federal government, together with some leading local mining companies, may take measures that could speed the development of the Yakutia’s Tomtor and Transbaikalia’s Zashikhinsky REE fields – the largest in the country, in terms of reserves.

In the case of Tomtor, full-scale development may begin in 2025 or even sooner.

In addition to REE mining, particular attention will be paid to increased processing. For this purpose, a hydrometallurgical plant capable of processing 160,000 tonnes of ore per year will be launched in Transbaikalia. It will produce ferroniobium for the metallurgical industry as well as concentrates of heavy rare earths for the electronic and nuclear industries. The plant will produce praseodymium and neodymium for ultra-high power magnets.

In addition to Russia, plans for the increase of REE mining are currently being considered by several countries located within the territories of former Soviet states where combined REE reserves, according to various estimates, exceed 20 million tonnes.

According to some independent analysts in the former Soviet states, which could be the most promising for REE mining activities, these include Kazakhstan, Kyrgyzstan, Estonia and Ukraine. In recent years, the governments of many of these countries have announced their interest to invest in the development of their REE mining sectors.

On the global scale, the development of REE mining, according to analysts, could be also promising in India, Brazil and especially Australia – which is one of the global leaders in terms of REE reserves.

In addition to traditional underground operations, many scientists and independent mining analysts expect the beginning of more active development of other REE fields located in hard-to-reach places, such as under the sea.

So far, some progress has been achieved. For example, in 2011, a Japanese research team discovered rare earths at the bottom of the Pacific Ocean when testing soil samples from 80 locations from depths of 3.5 to 6 km. According to some estimates, these deposits may contain up to 80-100 billion tons of rare earths. The concentration of rare earth elements was estimated at up to 1-2.2 parts per thousand for yttrium and up to 0.2-0.4 parts per thousand for heavy REE, which is, however, significantly lower than the level of concentration in the largest underground REE mines.

Recently, there have been two important events that will affect the rare earths sector. The European Raw Materials Alliance was announced by the European Commission as part of an Action Plan on Critical Raw MaterialsÂ announced earlier in September.

The European Raw Materials Alliance (ERMA) will be managed by EIT Raw MaterialsÂ and overseen by the European commission for a secure and sustainable access to critical raw materials.

The initial focus will be the rare earth and magnet value chains before extending to other raw materials required for Europe’s green and digital transitions. ERMA will target deliverables such as aÂ stakeholder consultation process, support for EU industrial policy toÂ mitigate regulatory and financing bottlenecks, set upÂ a Raw Materials Investment Platform to stimulate project investments, and promote public awareness and acceptanceÂ that critical raw materials will play in the transition to a green and digital economy.

While Europe has rare earths projects in France, Germany, Portugal, Spain, Sweden, Greenland and Norway, it is still almost totally dependent on China for its supply.

A second recent development was U.S. President Donald Trump signing an executive order declaring a national emergency in the mining industry that is aimed at boosting domestic production of rare earth mineralsÂ critical for military technologiesÂ while reducing the country’s dependence on China.

There are not many advanced rare earths projects in the U.S.; however, there are several in Canada that could represent a secure supply. With over 90% of magnet production from China, and the rare earths sectors growing over 10% in the past two years, other non-Chinese source are needed.

According to the Chinese General Administration of Customs, on October 13, China exported 2,003.3 tonnes of rare earths in September this year, a plunge of 43.8% from the same period last year (3,570 tonnes).Â Global production of Rare Earth Oxides are about 210,000 tonnes annually.

It is hoped that the European Raw Materials Alliance and President Trump’s executive order will spur the EU and US to return to being leading players in the global rare earths mining sector.

Critical minerals are classified as such by the European Union based on their economic importance and supply risk. Lithium, nickel, cobalt and graphite are increasingly in demand for lithium-ion batteries for electric vehicles and electronic devices. Heavy rare earths are used in permanent magnets for electric motors, wind turbines and electronic applications such as speakers.

The company is conducting a Preliminary Economic Assessment of its 100%-owned Norra KÃ¤rr Rare Earths Elements Project 300 km southwest of Stockholm. Norra KÃ¤rr, the only heavy REE deposit of note within the European Union, has an unusual enrichment in the most critical REEs that are essential for high strength permanent magnets (dysprosium (Dy), terbium (Tb), neodymium (Nd) and praseodymium (Pr). Development of Norra KÃ¤rr will reduce the need for European industry to import REEs from China.

In addition to REEs, Norra KÃ¤rr has the capacity to be a major supplier of hafnium (Hf) for super alloys, zirconium (Zr) for chemical resistive materials and the industrial mineral nepheline. 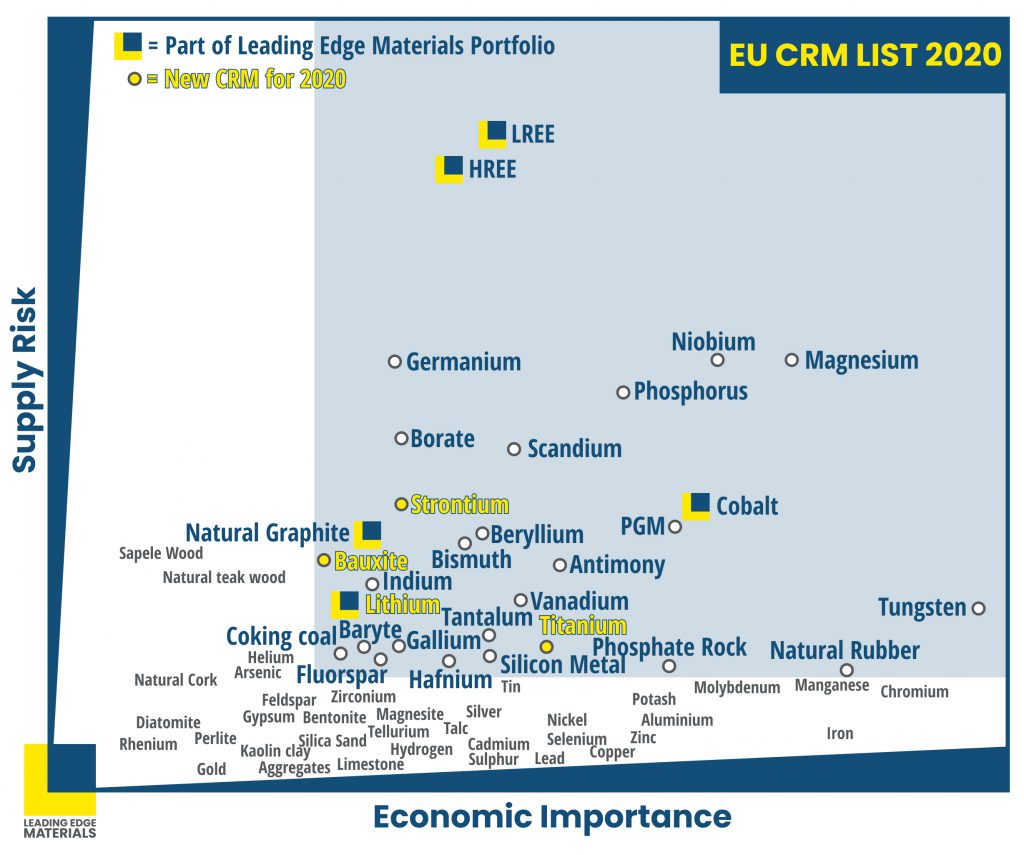 A 2015 a Pre-Feasibility Study only presented rare earth elements as an economic product. However, a range of opportunities were identified to convert much of the discarded mined materials into products for sale, with the advantage of also lowering the environmental footprint of the project. There is extensive infrastructure nearby and the company is awaiting a further permit application. 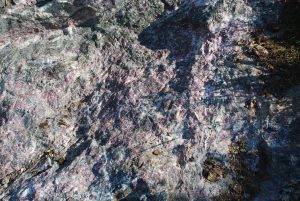 Leading Edge also has a 100% interest in the advanced-stage Woxna Mine Project which covers four known graphite deposits near the town of Edsbyn, central Sweden. Woxna is fully permitted with an open pit mine, graphite processing facility and tailings storage dam already constructed. The site is permitted to process 100,000 tonnes of graphitic rock per year for production of approximately 10,000 tonnes of graphite concentrate.

Leading Edge is participating in the newly launched research project “Graphite and graphene as battery electrodes” which is part of the Vinnova funded competence centre Batteries Sweden (BASE). The project will research the utilization of natural graphite for battery applications, the addition of silicon to the graphite particles, long-term stability and characterization and optimization of the surface chemistry.

Located less than 100 km from the Woxna graphite mine, the 100%-owned, 1,903-hectare Bergby Lithium Project is 25 km north of the town of Gavle. The site is close to infrastructure, with major roads, railÂ and power supply adjacent to the claim boundaries.

The village of Norrsundet lies 5 km east of the Bergby Project with a deep-water port suitable for processing and shipping of lithiumÂ or feldspar concentrates.

Various exploration programs have been completed, including surface sampling, geophysical surveys and drilling. A program of mapping and sampling of the Bergby site during 2016 located an extensive lithium-mineralized boulder field. Fifteen samples from three outcrop areas averaged 1.71%Â Li2O. Bergby has now been tested by a total of 1,525 metres of drilling in 33 drill holes to a maximum depth of 131.1 metres over an approximate 1,500-metre strike length.

Preliminary petrographic studies indicate the presence of the lithium minerals spodumene and petalite, which should support a traditional mineral processing path.

In Romania, Leading Edge has a 51% interest in the Bihor Sud nickel-cobalt exploration alliance. The 25 km2 property is located in the Northern Apuseni Mountains of Transylvania. The area under application includes a substantial former mine that was closed in 1998.

Leading Edge Materials is well positioned to supply the European Union with critical minerals needed for today’s and tomorrow’s industrial and consumer applications.