Antler Gold Inc. [ANTL:TSXV], is pleased to announce the delineation of seven high priority targets for exploration on its Erongo Gold Central Project (â€œCentral Projectâ€) in the southern central zone of the Damara orogenic belt.

Geological interpretation taking cognisance of fluid source, pathway and trap together with stratigraphic and lithological positioning in relation to favourable structural settings was crucial in successfully defining the seven prospects on the Central Project. Portions of the Central Project have limited outcrop due to the presence of Quaternary cover. In these areas interpretation and extrapolation of geology are essential to prioritising and directing future exploration activities.

Dan Whittaker, President and CEO of Antler commented, â€œWeâ€™re pleased to have generated seven quality targets on the Central Project. Some of these targets we expect can be advanced to the drill stage by late summer 2020. Generally, the significance of low order gold anomalism, especially in areas under cover has historically been poorly understood and has often resulted in inadequate followâ€up. Finally, we are also awaiting soil, rock and calcrete sample results on our Western Project which will factor into the target generation exercise there.â€

The figure below indicates the location of each of the prospects in relation to historical soil anomalies defined to date and a description of each follows. 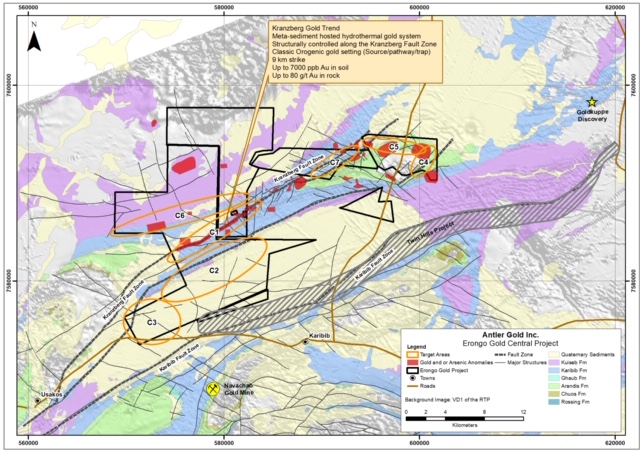 C4 & C5 â€“ The Arandis lithologies around the Etiro Dome on EPL6550. Gold in soil anomalies up to 150 ppb Au, against a background of 5 ppb Au, with support from rock samples containing anomalous gold.

C6 â€“ The Karibib – Kuiseb contact in the north of EPL7261 and EPL6162, especially in zones defined by NNE and WNW structure.

Note the historic results above have not been verified by Antler and the selected samples referred to above are not necessarily representative of the mineralization hosted on the property.

The significance of structurally controlled orogenic gold and the application of a mineral systems approach to exploration targeting has previously not been used in exploration for gold on the Erongo Gold Project. The mineral systems approach to mineral deposit genesis attempts to provide a framework that considers all the geological processes that control the formation and preservation of mineral deposits and is very much process driven particularly steering away from prescriptive mineral deposit model nomenclature and focuses on understanding the mineralising processes and translates these into mappable elements or proxies (Wyborn et al., 1994).

Antler believes that this is a crucial component to its exploration targeting and regards the Kranzberg Fault Zone as a high priority regional, fertile structure that has played a substantial role in gold mineralisation of the identified prospects. The significance of low order gold anomalism, especially in areas covered by Quaternary sediments and calcrete (caliche) has, historically, been poorly understood and often resulted in inadequate followâ€up.

Peter Hollick, Pr.Sci.Nat., consulting geologist, is the qualified person as defined by NI 43-101 guidelines and has reviewed and approved this release.

Antler Gold Inc. (TSXV: ANTL) is a Canadian company, focused on the acquisition and exploration of gold projects in Namibia. Antlerâ€™s Erongo Gold Project covers areas of the Navachab-Damara Belt, which is highly prospective for gold, and overlies similar lithologies and structures as the known Namibian Gold mines (QKRâ€™s Navachab and B2 Goldsâ€™ Otjikoto) as well as the recent Twin Hills discovery. Antlerâ€™s total license position now comprises four licenses (EPL 5455, 6162, 7261 and 6550) under option and a further five (EPL 7854, 7930, 7960, 8010 and 8042) under application, for a total landholding of approximately 83,576ha (835.8km2). Antler is currently focusing its efforts on advancing its Erongo Gold Project, which is located approximately 130 km north-west of Namibiaâ€™s capital city Windhoek and benefits from Namibiaâ€™s well-established infrastructure of paved highways, railway, power and water. Namibia is mining-friendly and lauded as one of the continentâ€™s most politically and socially stable jurisdictions. Antler continues to evaluate new ground with a view to expanding its Namibian portfolio.

Further details are available on the Company’s website at www.antlergold.com