Argentina Lithium & Energy Corp. (TSXV: LIT) (FSE: OAY3) (OTC: PNXLF), (“Argentina Lithium” or the “Company”) reports positive lithium brine values from the third and fourth diamond drill holes at its Rincon West Project in Salta Province, Argentina. The Rincon West project covers 3742.8 hectares of the salar basin, located west and north of the adjacent Rincon Project owned by Rio Tinto. The property is currently permitted for up to 9 exploration drill holes. The fifth exploration hole is currently in final steps to completion. The brine analytical results from the third and fourth holes have been received and are reported below.

“The fourth exploration hole has produced our best results to date. Lithium brines start at 38 metres depth, but the exciting result is the interval from 95 m to 227 m, with lithium values ranging from 334 to 382 mg/litre over a continuous 132 m interval. The third hole, located in the southern portion of the property produced lower grade brines at the bottom of the hole. Though the lithium potential appears to decrease in the southern portion of the basin, it is notable that we still produce lithium brines while stepping out 1.8 km south from our previous drilling. We have more drilling to do, to fully delineate our brine aquifer, particularly in the west and north.” stated Miles Rideout, V.P. of Exploration.

The results of the brine analyses and the respective intervals from which brine was recovered are shown in Table 1. Drill collar information is presented in Table 2. 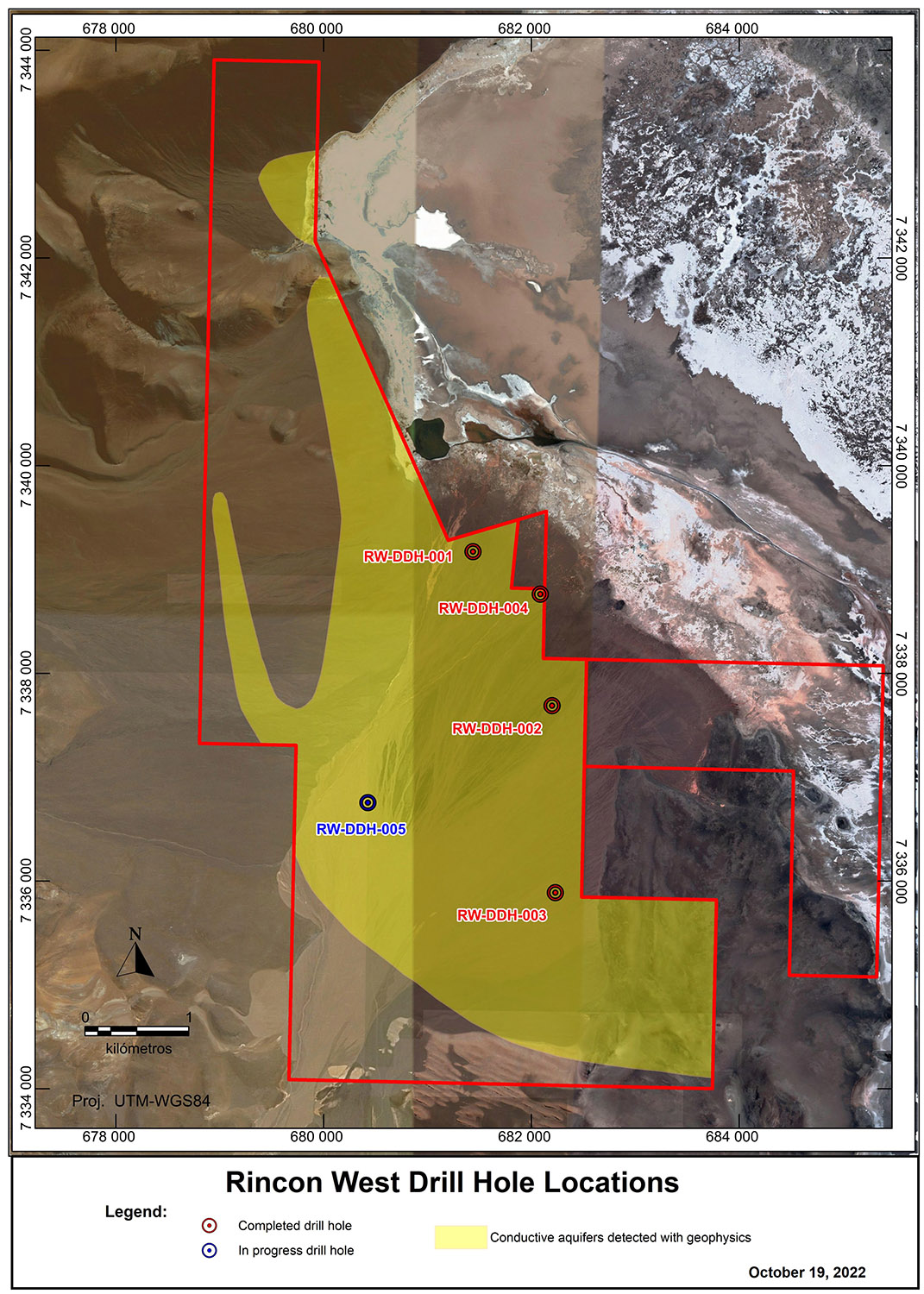 Both holes were executed with diamond drilling (HQ-size), permitting the extraction of core samples of the salar basin formations, and recovery of brine samples where possible. RW-DDH-003 was executed between July 26 and August 22, stopping at 353 metres depth in igneous rock units. Lining the hole with 2″ diameter PVC filters and tubing was completed on August 23, 2022.

RW-DDH-004 was executed between August 26 and September 21, stopping at 254 metres depth in igneous basement rock units. Final sampling and lining the hole with 2″ diameter PVC filters and tubing were completed by September 22, 2022.

Drilling was carried out by Salta-based AGV Falcon Drilling SRL, under the supervision of Argentina Lithium’s geologists.

Brine sampling was conducted using a single packer sampling unit during drilling of both holes. The packer sampling method allows the collection of brine samples at specific depths while sealing the hole at the top and bottom of the interval.

Table 1: Interval data and results of brines analyses for lithium, potassium, and magnesium for drill holes RW-DDH-003 and RW-DDH-004 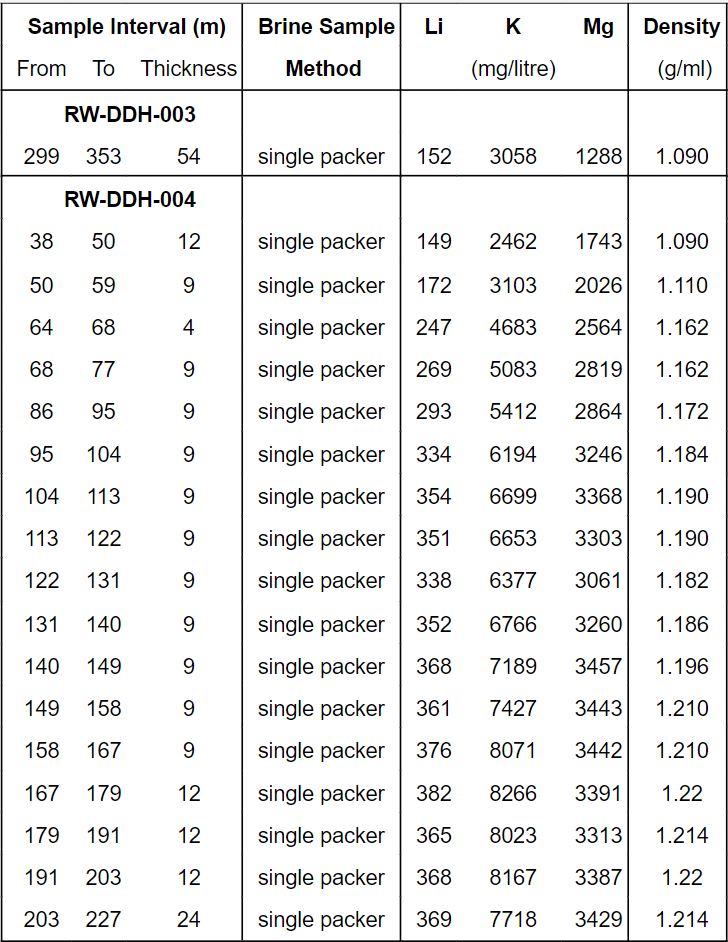 *Both drill holes were inclined vertically; the salar strata are believed to be flat lying resulting in reported intervals approximating true thickness.

Table 2: Collar and maximum depth information for RW-DDH-003 and RW-DDH-004

RW-DDH-003 is the southernmost hole planned for this program, being located approximately 1800 m south of RW-DDH-002. The hole passed through interbedded sands and gravels from surface to 90.7 metres depth. From 90.7 m to 102.8 m, the hole traversed ignimbrites. Sandy units interbedded with gravels were logged from 102.8 m to 303.4 m depth. Clays were logged in this sequence in the interval 114 m to 133.8 m. The drill entered ignimbrites with a significant degree of fracturing and secondary porosity at 303.4 m, extending to 308 m depth. From 308 m the ignimbrites lacked alteration and fracturing. The hole was terminated in this unit at 353 m depth.

In frequent packer tests through the sequence of sediments, insufficient recovery of liquid was obtained for sampling. The final packer test, situated at the interval between 299 m and 353 m depths was successful, producing the brine sample presented in Table 1.

Lithium brines were sampled from 39 m depth, tending to increase in density and lithium values to 149 m, where density values plateaued, as reported in Table 1. Fresh water was not encountered in the hole.

Poorly consolidated sands and gravels were logged from the surface to 32 m depth, followed by a 3 m layer of clay. Frequently high-porosity sandy sediments (red, brown, grey and black sandy units) were then logged from 35 m depth to 107 m, with minor yellow clays occurring in the narrow interval between 38 m and 41 m.

A silty unit with clay was logged from 107 m to 113 m. Sulphates and also orpiment were observed with this unit. Interbedded units of sandy sediments and gravels were logged from 113 m to 193 m, where sulphates and occasional levels with ignimbrite clasts were observed. A fractured ignimbrite was traversed between 193 m and 204 m. At 204 m, the drill entered competent andesites with low porosity. The drill was stopped in this unit at 254 m depth.

All core samples recovered in drilling are retained for logging and are available for subsequent laboratory evaluation of factors such as total and effective porosity, permeability and other measurable characteristics of the aquifer formation.

Samples of brine were submitted for analysis to Alex Stewart International Argentina S.A. (“Alex Stewart”), the local subsidiary of Alex Stewart International, an ISO 9001:2008 certified laboratory, with ISO 17025:2005 certification for the analysis of lithium, potassium and other elements. Alex Stewart employed Inductively Coupled Plasma Optical Emission Spectrometry (“ICP-OES”) as the analytical technique for the primary constituents of interest, including boron, calcium, potassium, lithium, and magnesium. Measurements in the field included pH, electrical conductivity, temperature and density. The quality of sample analytical results was controlled and assessed with a protocol of blank, duplicate and reference standard samples included within the sample sequence. The blank (3) and duplicate (2) samples reported herein were analysed at Alex Stewart all reported in the acceptable range. Low-grade (3) and medium-grade (2) reference standards were included in the sample submissions to Alex Stewart. Two of the low-grade reference standard analyses were greater than the acceptable range of 3 standard deviations (SD) and one was at the 2 SD acceptable limit; relative percent difference (RPD) ranged from 1.00-5.83%. The medium-grade standard returned one analyses at 2 SD; the second was less than 3 SD but RPD was low (1.01-2.02%). Select samples have also been submitted to a second laboratory as a standard check protocol.

The Rincon West Project comprises the following properties. Villanoveno II and Demasia Villanoveno II, totaling 2491 hectares, are held under an option whereby the Company can earn a 100% interest, as described in the Company’s September 28, 2021 News Release. Argentina Lithium has also purchased the 460.5 hectare Riconcita II property, adjacent to Villanoveno II (see August 25, 2022 News Release). The Company entered into an option agreement to earn a 100% interest in four contiguous mine concessions, the “Paso de Sico” option, totalling 791.3 hectares in the northern part of the Salar de Rincon (see October 6 News Release).

David Terry, Ph.D., P.Geo. is the Company’s Qualified Person as defined in National Instrument 43-101. Dr. Terry is responsible for oversight of the Company’s early-stage exploration at the Rincon West property. The disclosure in this news release has been reviewed and approved by Dr. Terry.

Argentina Lithium & Energy Corp is focused on acquiring high quality lithium projects in Argentina and advancing them toward production in order to meet the growing global demand from the battery sector. The management group has a long history of success in the resource sector of Argentina and has assembled a first-rate team of experts to acquire and advance the best lithium properties in the “Lithium Triangle”. The Company is a member of the Grosso Group, a resource management group that has pioneered exploration in Argentina since 1993.

Forward-looking statements are subject to a number of risks and uncertainties that may cause the actual results of the Company to differ materially from those discussed in the forward-looking statements and, even if such actual results are realized or substantially realized, there can be no assurance that they will have the expected consequences to, or effects on, the Company. Factors that could cause actual results or events to differ materially from current expectations include, among other things: the impact of COVID-19; risks and uncertainties related to the ability to obtain, amend, or maintain licenses, permits, or surface rights; risks associated with technical difficulties in connection with mining activities; and the possibility that future exploration, development or mining results will not be consistent with the Company’s expectations. Actual results may differ materially from those currently anticipated in such statements. Readers are encouraged to refer to the Company’s public disclosure documents for a more detailed discussion of factors that may impact expected future results. The Company undertakes no obligation to publicly update or revise any forward-looking statements, unless required pursuant to applicable laws. We advise U.S. investors that the SEC’s mining guidelines strictly prohibit information of this type in documents filed with the SEC. U.S. investors are cautioned that mineral deposits on adjacent properties are not indicative of mineral deposits on our properties.