Arizona Mining Inc. [AZ-TSX] on Thursday March 15 announced more drilling results from a program that is focused on expansion of the Trench Vein System, Taylor Sulfide Zone and Taylor Deeps Zone at its 100%-owned Hermosa-Taylor Project in Arizona. 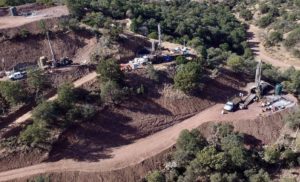 Results released Thursday are from four step-out and one in-fill hole. The company said the step-out holes indicates continued mineralization and further potential for resource upside to add high-grade material into the early part of the mine plan.

â€œOur exploration drilling continues to find additional high-grade areas well outside of the PEA [Preliminary Economic Assessment] resource boundary, such as that highlighted by HDS-501 in our last press release, and step-out hole HDS-491 on the northern arm of the Trench block in [Thursdayâ€™s] results,â€ said Arizona Chief Operating Officer Don Taylor.

â€œThese holes are in close proximity to planned mine infrastructure and have the potential to both significantly add to our already world-class resource for the feasibility study and add more high-grade material into the early part of the mine plan,â€ he said.

The latest results are part of a 55,000-metre in-fill and step-out drilling program that will be included in the Feasibility Study, marking the next key step after a PEA was released January 16, 2018.

Based on the updated PEA, the company continues to target first mineralized material-to-plant from a proposed 10,000 ton-per-day operation in 2020.

The Hermosa property is located about 80 km southeast of Tucson, about 13 km north of the U.S. border with Mexico. Located 1,600 metres above sea level, the property hosts two stratigraphically controlled mineral deposits, the Taylor and Central deposits.

HDS-491 is a vertical step-out hole targeting shallow Trench Vein System mineralization on the northern arm of an area called the Trench claim.Â  The drill hole intercepted two veins, one of which was very significant. The Trench Vein intercept demonstrates 1,700 feet of continuity along strike between previously reported drill hole HDS-395 (April 20, 2017) and HDS-492.