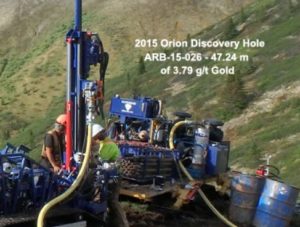 ATAC Resources Ltd. [ATC-TSXV] announced, on May 31, the completion of an updated Preliminary Economic Assessment (PEA) for the Tiger deposit, located at the western side of the company’s 100% owned Rackla Gold Project, Yukon.

ATAC reports that the 2016 PEA has incorporated results of geotechnical and infill drilling conducted in 2015 and metallurgical studies completed in early 2016. Key changes to the 2014 PEA consist of the inclusion of both oxide and sulphide resources and the adoption of a simplified year-round agitated tank carbon-in-pulp (CIP) leaching process. The 2014 PEA (see ATAC news release dated July 23, 2014) only investigated the extraction of oxide resources by means of a seasonal hybrid heap-leach and agitated tank carbon-in-leach (CIL) process.

“We are very pleased to have doubled the pre-tax NPV to over $100 million and to have been able to improve on every other 2014 PEA metric. The future development of the Tiger deposit would bring critical infrastructure, including tote road access, to the Rackla gold project. Exploration will begin shortly at the newly discovered 10 km2 Airstrip gold anomaly and elsewhere within the Rau Trend with the objective of identifying additional nearby resources. ATAC will continue to explore opportunities to advance or monetize the Tiger deposit through sole development or joint venture,” states Graham Downs, President and CEO of ATAC. “ATAC remains committed to further advancing the entire Rackla gold project, including the Carlin-type targets within the Nadaleen trend. Drilling is scheduled to begin soon at the Orion discovery, where one of the last holes of 2015 (ARB-15-026) intersected 3.79 g/t gold over 47.24 m.”

Key Improvements over the 2014 PEA:

The 2016 PEA envisions a conventional year-round operation and has improved upon all aspects of the 2014 PEA. Key improvements include:

The Tiger Project has been modeled as an owner-operator, conventional truck-and-shovel open-pit mining operation with a conventional CIP gold recovery process. Year-round operations would be supported via a 68 km tote road, which connects the project to the Yukon highway system, near Keno City.

Mineralized material will be loaded into 40 tonne articulated trucks and delivered to the process plant, located 1 km southwest of the pit. High-grade mineralized material will be sent directly to the primary crusher, while low-grade stockpile material will be stored close to the primary crusher. Waste material from the pit will be stored in two waste dumps, located at the northwest and southwest sides of the pit. A total of 3.2 Mt of the mineral resource and 15.6 Mt of waste rock will be produced from the pit during the 7 years of mining operations and pre-stripping. The LOM average gold grade of mined oxide and sulphide resources is 4.06 g/t and 2.99 g/t, respectively. The LOM stripping ratio (defined as waste material mined divided by mineral resources mined) is 4.9.

Due to the soft nature of the mineralization and host rock, a single stage of crushing will be performed by a MMD sizer. Crushed material will be ground to 80% passing 75 microns using a semi-autogenous grinding mill and a ball mill in series before cyanide leaching in a conventional CIP circuit. The leach tailings will be detoxified and stored in a lined facility within the Tiger Valley. Gold will be refined into doré bars on site through a standard Adsorption, Desorption and Recovery treatment. Based on the results of metallurgical testwork and the mining schedule, projected LOM average recoveries are 90.3% for oxide mineralization and 57.7% for sulphide mineralization.

Total LOM capital costs are $117.7 million, with $109.4 million in pre-production costs and $8.3 million in sustaining capital. To minimize initial capital costs, the PEA has assumed that modular equipment would be used where possible and that some equipment and facilities will be leased.

ATAC is very pleased with the increased value of the Tiger deposit shown in this updated PEA relative to the initial 2014 PEA and believes that opportunities exist to further enhance the economics of the project. Some key opportunities include:

Since 2008, ATAC has completed comprehensive water, heritage, wildlife and fisheries studies. ATAC will continue environmental baseline work and ongoing studies as it advances the Tiger deposit and other targets throughout the Rackla gold project.

Community and First Nation engagement began in 2008, and an Exploration Cooperation Agreement with the First Nation of Na Cho Nyak Dun (NNDFN) was signed in 2010.

Metallurgical testwork has been previously conducted in several phases on both the oxide and sulphide material, including work by G&T Metallurgical, SGS Canada, and Kappes, Cassiday & Associates in support of the 2014 PEA. Additional variability cyanide leach test work was conducted on the Tiger deposit by Blue Coast Research Ltd. in 2016 for the updated PEA. Bottle roll testing was conducted on eight oxide and eight sulphide composites, and master composites samples. Samples were selected to evaluate potential variability in grade and mineralization throughout the deposit. Oxide recoveries from 24-hr bottle roll tests ranged from 77% to 98%. Sulphide recoveries from 24-hour bottle roll tests ranged from 13% to 88%.