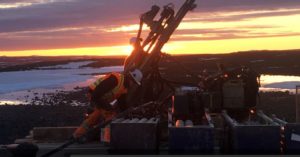 Auryn Resources Inc. [AUG-TSX, NYSE AMERICAN] has reported the first drill results ever from the Aiviq prospect located 12 km north of the Three Bluffs deposit, Nunavut, northern Canada.  Highlights from the Aiviq prospect include 12.2 metres of 4.7 g/t gold (including 3.05 metres of 18.09 g/t gold) intersected in an interpreted silicified shear zone. These results are the first step in defining a new discovery on the Committee Bay Greenstone Belt in a newly recognized style of mineralization.

The mineralization encountered at Aiviq is situated along a regional shear zone that is defined by a 7-km long gold-in-till anomaly. This shear zone was tested by a single drill fence during the 2017 summer drill program leaving the prospect wide open to expansion. The other holes drilled at this prospect did not target or intersect this shear zone

Importantly, the high-grade mineralization intersected in drill hole 17RGR003 is situated within a 100-metre wide zone of lower grade structures that demonstrate the overall strength and potential of the gold-bearing system. Auryn believes that a follow up drill program along this shear zone is highly warranted given the similar nature of the till signatures and comparable high grade gold values to those found at the Three Bluffs deposit.

Aiviq’s proximity to Three Bluffs allows the company to leverage the substantial existing exploration infrastructure already in place at its Hayes Camp for future drilling and potential development.

Michael Henrichsen, Chief Geologist and COO of Auryn, said, “Auryn’s technical team has done an outstanding job of vectoring to high-grade gold mineralization under till cover at the newly defined Aiviq prospect. We view this high-grade intercept as the first step to defining a significant new discovery at Committee Bay and are looking forward to aggressively exploring the 7-km long gold-in-tills anomaly along the mineralized shear zone in 2018.”

Henrichsen further stated, “The proximity of the Three Bluffs deposit with this new discovery, creates the potential for a multi-deposit scenario utilizing common infrastructure as we expand the Three Bluffs resource and continue our exploration efforts at Aiviq.”

Additional positive results were received from the Aarluk prospect where 4.57 metres of 2.52 g/t gold was intersected in banded iron formation where there are three holes pending assay. This prospect is located 17 km to the north of Aiviq and remains open demonstrating the emerging importance of the north-south trending 30-km long structural corridor from Three Bluffs through to Aarluk.

To date the company has received complete results from the Aiviq, Kalulik, West Plains, Ziggy South, Avinngaq, and partial results from the Aarluk prospect (3 holes pending assay) representing a total of 39% of the drill program. The summer exploration RAB drill program completed 30,133 meters in 156 holes with 61% of the remaining results to be released in the coming months.

Auryn Resources is focused on scalable high-grade gold deposits in established mining jurisdictions, which include the Committee Bay and Gibson MacQuoid gold projects located in Nunavut, the Homestake Ridge gold project in British Columbia and a portfolio of gold projects in southern Peru, through Corisur Peru SAC.