The Quesnel Trough, also known as the Quesnel Terrane, is a Triassic/Jurassic-age arc of volcanosedimentary and intrusive rocks that hosts a number of alkalic copper-gold porphyry deposits with copper gold and silver values and sometimes molybdenum. The Trough runs northwest some 1,000 km from the U.S. border in south-central British Columbia to close to the Yukon border.

In addition to the copper-gold porphyry deposits, the Quesnel Trough, the longest mineral belt in Canada, is also known for several types of gold deposits.

David Moore, P.Geo., President of Serengeti Resources, which is advancing the Kwanika Project in the Quesnel Trough 85 km northwest of the Mt. Milligan deposit, told Resource World, “The Quesnel Trough is of paramount importance to the British Columbia mining sector with its rich mineral endowment, for copper and gold in particular. These copper-gold porphyries include Copper Mountain, New Afton,   Mt. Milligan, Woodjam, Kwanika and Kemess, to name a few. Teck’s huge Highland Valley Mine is, of course, very important to Canada.”

Moore said he believes the Quesnel Trough and its extensions are still very prospective for discovering new mineral deposits. “Some of the deposits don’t have big footprints on surface, making them hard to find, but they offer tremendous depth potential which means that you can build some really significant tonnage,” he said. “You only have to look at the recent drilling success of Kodiak Copper with their spectacular deep drilled holes.”

He noted that, “In the central part of the Trough, there is extensive glacial drift – a difficult exploration challenge. For example, despite that challenge, further north we have had early success with our East Niv Project just off trend and located 40 km south-southwest of the Kemess mine complex. It’s a copper-gold-bearing porphyry intrusive with a peripheral swarm of locally high grade mineralized veins.”

Serengeti Resources Inc. [SIR-TSXV] has delineated substantial copper-gold resources at its advanced-stage majority-owned Kwanika Project located in the prolific Quesnel Trough 85 km northwest of the producing Mount Milligan copper-gold mine. The 26,000-hectare Kwanika Project is owned as to Serengeti 67% and Posco International Corp. ~33%.

David Moore, P.Geo, President and CEO, stated, “We are preparing an interim study on the Kwanika Project that will document the extensive work completed to date. We are stepping back from the engineering to consider resource expansion on both the open pit and underground side. This will include envisaging the block caving mining method for underground operations. There are also some terrific exploration opportunities nearby to create value with the drill bit.”

Serengeti has also been working on project optimization with one consideration being ore sorting. The University of British Columbia is involved in the study of sensor-based pre-beneficiation ore sorting which results in mining more rock with lower milling (beneficiation) costs that some other Quesnel Trough miners utilize. 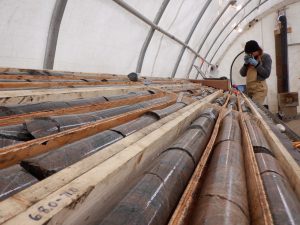 Resource expansion drilling is underway at Kwanika on the Central Zone, South Zone and several other targets with the numbers to be incorporated in a future pre-feasibility study. Metallurgical studies have determined that copper recoveries averaged 88.3% and 73.5% for gold.

Serengeti will be drill-testing a potential new mineral centre located 500 to 600 metres north of the Central Zone that could use the same underground infrastructure. The company expects that the total program will include up to 4,300 metres of drilling in eight to nine drill holes testing exploration targets and resource expansion opportunities. Two holes have been completed to date with the third currently underway.

“I look forward to getting the results on these new mineralized intervals and the information gained so far is showing a larger target at depth to the north of the Central Zone deposit as well as a possible extension towards the south,” said Moore. “The current drilling is starting to demonstrate the full potential of the property and positive results should add blue sky potential and value to an already advanced copper-gold resource on the Kwanika Project.”

Serengeti Resources, one of the few juniors holding a majority ownership in an advanced-stage copper-gold project, also holds a number of earlier stage projects, including the prospective East Niv Project just off trend 40 km south-southwest of the Kemess mine complex.

All of Serengeti’s projects are in British Columbia, a politically stable, pro-mining jurisdiction with good infrastructure. The company has 109.4 million shares outstanding and $1.65 million in its treasury.

Exploration to date at the 26 km2 Captain Project has outlined a large gold-copper porphyry system which encompasses a cluster of porphyry targets with geophysical and geological characteristics similar to the Mt. Milligan deposit.

David Hottman, CEO, said, “The significance of the Captain Project being in the Quesnel Trough is that this geologic sequence hosts numerous large porphyry deposits such as Mt. Milligan, Mt. Polley, Kemess, Afton, Woodjam and Copper Mountain – all of which are large copper-gold porphyries.”

Orestone is permitted for 24 drill locations to test the 10 large magnetic-high targets located on the east and west flanks of a central magnetic diorite intrusive.

“Previous drilling at Captain has demonstrated that we are dealing with a cluster of gold-enriched porphyry targets highlighted by several drill intervals of 90 to 164 metres in length with values averaging 0.30 g/t gold and 0.06% copper; higher grades in hole C12-05 with intervals of 6.1 and 9.1 metres of 4.45 and 6.46 g/t gold and 0.51% and 0.27% copper, respectively, are further evidence of a strong mineralizing system, said Hottman.” 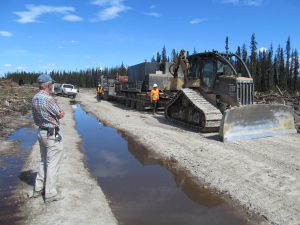 Of the 10 targets outlined on the Captain Project, only two have been drill tested to date. The project features relatively flat terrain, moderate tree cover, and an extensive network of logging and Forest Service roads suitable for exploration year-round.

“In a nutshell, the target model has been developed from the last drill program and re-mapping and re-logging core hole 19-07,” said Hottman, “We also did quite a bit of geophysics on the property which is covered with 20 to 100 metres of glacial till so there is no outcrop in the area we have been working in.”

Orestone is planning to initiate the drill program on two different targets and is finalizing the drill contracts and work program.

Management continues to engage in introducing the property to potential major miner joint venture partners to advance the discovery process.

The Captain Project is a potential company-maker located in a major trend that hosts very large copper and gold porphyry deposits. In June, the company completed an $850,000 private placement financing. Orestone has 38,803,283 shares outstanding.

Green River Gold Corp.  [CCR-CSE] was founded in 2017 to seek opportunities in the gold sector in the legendary Cariboo Mining District of British Columbia.

With the assistance of local geological consultants and miners, the company acquired and/or staked 90 km2 of mineral claims and 24 km2 of placer mining claims located near the historic gold mining area surrounding Barkerville.

CCR’s unique business model combines generating cash flow from renting its placer claims to other miners and from providing services to placer miners, while exploring for lode gold on the Fontaine property. The active placer gold related businesses allow the company to maintain a significant physical presence and an employee base in the town of Quesnel.  Quesnel is in the heart of the Cariboo Mining District and is an easy daily commute from CCR’s mining properties.  This greatly reduces the cost of exploration and development.

One month after the initial acquisition closed, the area began to draw attention when Barkerville Gold Mines Ltd. was taken over by Osisko Gold Royalties Ltd. for $335 million. 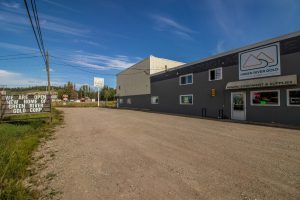 Since the initial acquisition, CCR has continued to expand its Fontaine mineral and placer claims and has also added additional placer claims along several well-known creeks and rivers near to the Fontaine Project.  The company is currently raising $1,200,000 through a non-brokered private placement to fund its planned exploration on the Fontaine mineral claims and on its placer claims. The funds may also be used for equipment and inventory purchases and working capital.

Management is excited about the potential that exists for lode gold on the Fontaine mineral claims.  Early stage exploration activities are ongoing and a large drilling program is being planned.

Meanwhile, the company is continuing to build on its concept of creating multiple revenue streams from the placer mining business. This season, CCR began to permit placer mining claims which it rents to other placer miners.  Rather than collect a royalty in the form of gold, CCR collects a cash rent based on the anticipated amount of gold to be produced over the season.  CCR takes care of the permitting, posts the reclamation bond and collects rent while the renter takes the mining risk, puts in the infrastructure and does the actual mining.

CCR, as landlord, retains ownership and benefits from any discoveries made on the property.  The rent collected is a small part of the story.  It is the potential increase in value of the property from proving up an economic placer mining claim where the real payoff comes in. The very process of having the claims permitted tends to increase their value. The building of access roads and digging of retention ponds, as well as the exploration that is done via actual mining can also increase the value of the claims. Other than permitting, which CCR handles in house, all the other costs of putting in the infrastructure and doing the mining are borne by the renter.  With 24 km2 of placer claims, the company has room to grow this aspect of the business for years to come.

CCR recently moved in to an 8,000 square foot commercial/industrial building on Highway 97 in the North End of Quesnel.  That building is shared with a related private company that manufactures mining equipment for the placer mining industry.  CCR maintains its offices there and also runs a retail store and provides contract permitting services to placer miners.

CCR is well positioned to take advantage of the current renaissance in placer mining while continuing to explore its 90 km2 hard rock property that borders Osisko’s Cariboo Gold Project.