Beauce Gold Fields (Champs D’Or en Beauce) (TSX Venture: ¨BGF¨), (“BGF” or the “Company”): is pleased to announce the discovery of an unexplored placer channel in the Ditton county of Southern Quebec. The Channel holds a Tertiary placer deposit as well as the potential for a parent lode gold deposit.

Patrick Levasseur, President and CEO of Beauce Gold Fields said, “We made a new discovery in Canada’s oldest placer gold district.  This is a result of our exploration work that found gold in the Ditton sand quarry and by our in-depth study of overlooked historical data.” Mr Levasseur further stated. “This important discovery merits a thorough investigation of the placer channel and of the surrounding bedrock starting this spring.” 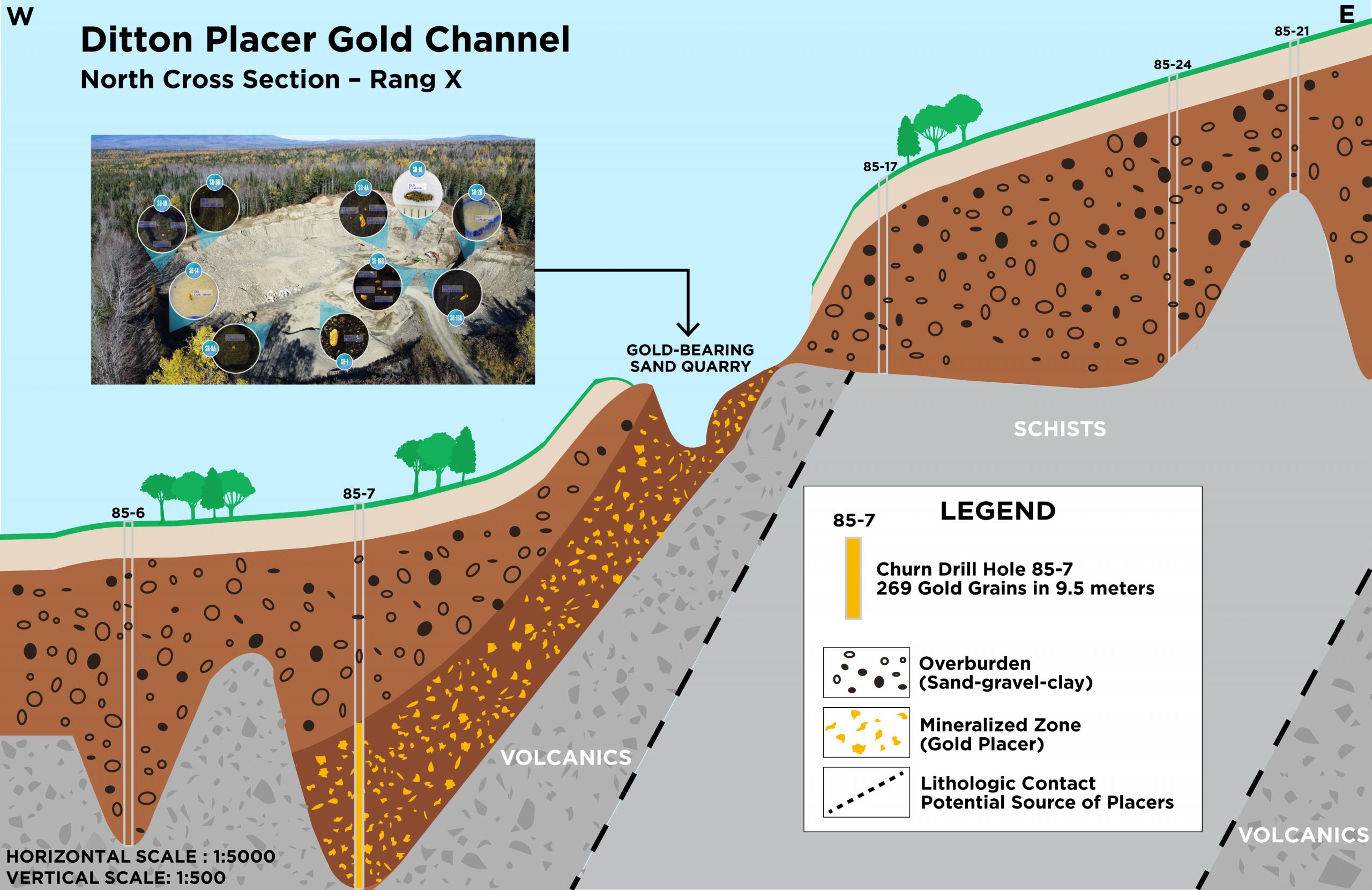 The epicenter of the discovery is a cross section of the placer channel along Rang Dix road near the town of La Patrie in Ditton Township, Quebec.  The channel is located 4 km east of the historical Mining Brook placer gold mine and 5 km west of the US New Hampshire border.  It is also located 105 km south to the Company’s Beauce Gold project in St-Simon-Les-Mine.

The insight that lead to the discovery was brought by a compiled analysis of the Company’s exploration of the Ditton quarry (BGF press release January 20, 2022), prospector Pierre Paquette’s gold sample data (BGF press release February 23, 2022) and from the study of 1980’s historical exploration reports (GM42843).

Prospector Pierre Paquette first discovered gold in an operating sand quarry in Ditton Township.  BGF follows this lead with a sampling program that recovered gold from every sample taken throughout the quarry.  A study of the regional geology revealed that the quarry was an excavated pit of an Eastern lip of an exposed layer of a Tertiary placer channel.

In 1985, Cache Explorations undertook 36 km of geophysics throughout the Ditton & Chesham counties to study the placer gold occurrence surrounding the Mining Brook 19th century placer mines. The purpose of the seismic program was to define depths to bedrock and thickness of the glacial drifts, Quaternary overburden cover in order to interpret the substructure bedrock topography. The gold deposits were thought to be located in deep Tertiary channels were gold concentrations would be found deep at/or close to bedrock and at such depths that the glacial scouring would have missed by overriding such deep channels. A 4.98 km survey line along Rang Dix road identified 4 Tertiary channels. Churn drill holes were put down to the trough of the channels of which only one hole returned significant gold values. Churn drill hole 85-7 (GM42843) 400m west of the Ditton quarry intercepted a gold zone at 10.4m to 20.2m deep that returned 269 gold grains.  Cache continued to focus on Mining Brook exploration and for reasons not know to the Company, did no follow-up work to the Rang Dix anomalies.

The potential size of the channel can be inferred by two studies commissioned by the Provincial government for the purpose of measuring surface sand and gravel deposits in Southern Quebec. According to the MERQ (Ministry of Natural Resources) the larger area (NE-SW) would be 1,800m long X 500m wide with an average depth of 5m. While that of UQAM University, the gravel deposits would be oriented more E-W and would measure 700m in length X 400m wide and an average depth of 5m.  However, as implied by the Cache Exploration drill hole 87-7, the depth and the corresponding volumes of the channel would be significantly greater.

The Company will move forward with an exploration program to explore the placer channel for the real potential of discovering a large placer gold deposit.

The Bella Fault line is estimated to run along strike 1 km east of the placer channel where Cache Exploration in 1985 put down 3 diamond drill holes (DDH) along Rang Dix road to test a strong shear zone. The holes intersected andesites containing numerous quartz stringers mineralized with pyrite and containing much tourmaline.  Of interest, in the drill log for DDH number S-2 states that visible gold was noted at 240 meters (GM42843).  Cache did not complete the recommended follow-up drilling to test this anomaly.

Jean Bernard, B,Sc. Geo., is a qualified person as defined by NI 43-101 who has reviewed and approved the technical information presented in this release.

Beauce Gold Fields is a gold exploration company focused on placer to hard rock exploration in the Beauce region of Southern Quebec.  The Company’s flagship property is the St-Simon-les-Mines Gold project site of Canada’s first gold rush that pre-dates the Yukon Klondike.  The Beauce region hosted some of the largest historical placer gold mines in Eastern North America that were active from 1860s to the 1960s It produced some of the largest gold nuggets in Canadian mining history (50oz to 71oz). Beauce Gold Fields’ objective is to trace the old placer gold workings back to a bedrock source to uncover economic lode gold deposits. (Source Sedar: Beauce July 4th 2018, 43-101 Report)