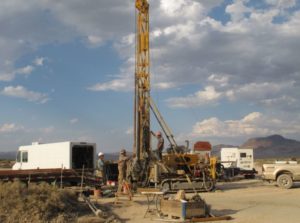 Further to our news release of August 27, 2018 Belmont and MGX Minerals Inc. (CSE: XMG) have received assay results from 125 samples collected from the top 1270 feet (mud rotary section) of hole KB-3. Anomalous concentrations of lithium occurred between 960 and 1270 feet. The section between 1110 and 1210 feet averages 415 parts per million (“ppm”) Li with a high of 580 ppm lithium.

The borehole targeted the southern portion of a large robust MT conductor, which may represent saturated sediments containing lithium-rich brines. The hole drilled through lacustrine playa sediments – dominantly calcareous clays and silts grading to lithified claystone’s and siltstones at depth. Sand and gravel zones, which may represent brine-bearing aquifers, were encountered at depths of 150-170 feet, 210-230 feet, 260-300 feet, and 900-920 feet, where a potentially major aquifer in cobble gravel was intersected.

At deeper levels, thin intervals of altered rhyolite ash and possible hot-spring sinter were encountered at 1411-1412 feet, 1488-1490 feet and 1589.5-1590 feet.Â  Operation of a paleo-geothermal system is evidenced by the silicified intervals and fronts of pyrite alteration increasing below a depth of 1500 feet.

Hole KB-3 was drilled by mud rotary methods to a depth of 1270 feet.Â  The hole was completed as a core tail to a total depth of 1798 feet. The hole diameter was reduced to 3-5/8 inches to drill HQ (2.5 inch diameter) core. 25 samples of representative core were selected for assay from this lower part of the drilling and were delivered to ALS Labs in Reno, Nevada on August 31, 2018 for 41-element ICP analysis (including Li). Samples were of ash layers, silicified sediments, and high pyrite and magnetite zones. 10 water samples were collected at various levels from 370 feet through to 1745 feet.Â  Also one sample of well water and one surface water sample were collected and delivered to ALS Labs on August 31st for ICP analysis and physical properties. Assay results from these drill core and water samples are expected by later this month.

The Kibby Basin shares many characteristics with Clayton Valley, where lithium brines are being exploited, including: closed structural basin, large conductor at depth, lithium anomalies at surface and depth, evidence of a geothermal system, and potential aquifers in porous ash and gravel zones.

Final compilation when further assays are received, Â and scheduling for the second 2018 drill hole (KB-4) on the Kibby property are being discussed. The drills will be mobilized to the second site as soon as possible

On August 24, 2018 the TSX Venture Exchange (the “Exchange”) accepted for filing the property option agreement (the “Agreement”) between Belmont Resources Inc. (“Belmont”) and MGX Minerals Inc. (“MGX”) -( CSE Trading Symbol: XMG), dated July 12, 2018 under which Belmont has agreed to grant to MGX an option to earn up to a 50% interest in its Kibby Basin Property (“Kibby”).Â  In order to earn an initial 25% interest in Kibby, MGX must:

In order to earn an additional 25% (for a cumulative interest of 50%) in Kibby, MGX must:

Further details and terms of the agreement can be reviewed in our July 13, 208 news release and filed on SEDAR and our website at www.BelmontResources.com

Correction to the Exchange bulletin of August 24, 2018.Â  Belmont will pay a finder’s fee to R7 Capital Ltd. (Karim Rayani) of up to 5% in Units on each $300,000 in Exploration Expenses incurred.Â  Each Unit shall consist of one common share at a deemed price of $0.07 and one warrant exercisable for two years at $0.10.Â  It is expressly understood that the finder’s fee and the number of Units issued by the Company is solely based on the amount of Expenditures incurred.Â  (ie. Upon MGX completing $300,000 in expenditures, Belmont will issue to R7 Capital 214,286 common shares and warrants).

Robert (“Bob”) G. Cuffney, Certified Professional Geologist, a Qualified Person as defined by National Instrument 43-101, has reviewed and approved the technical information in this news release.

Belmont is an emerging resource company engaged in the acquisition, exploration and development of mineral properties in Canada and Nevada, U.S.A.