Skip to content
Share this article
Blackrock Gold Corp. [BRC – TSXV] is pleased to announce more high-grade gold and silver drill intercepts from its core drilling program on the Victor Target on the 100% controlled Tonopah West project located in the Walker Lane trend of Western Nevada. These results validate the Company’s understanding of the structural orientation of the thick structure that was previously encountered during reverse circulation drilling and highlights considerable geologic potential within this target area.

“With six months of core drilling now under our belt at Victor, it is these new assay results that management are most excited about as they represent what has been the missing link for us thus far, a confirmation that our model of the structural controls of the system is correct having hit the thick mineralised zone again as predicted. With our geologic model now validated, it is evident that significant exploration potential remains within this target. TW20-061C is the first drillhole to cut the thick, down-dip mineralized structure first encountered in TW20-001.  Several previous attempts were cut short due to technical issues.  Intersecting this thick zone of gold and silver mineralization not only demonstrates the high-grade nature and continuity of the vein, extending it along strike and down-dip, but it also indicates we now have a solid grasp of the orientation of the structure itself, allowing us to hone in on expansion opportunities with high a confidence in continued drilling success,” commented Andrew Pollard, President & CEO of Blackrock Gold.

Mr. Pollard continued, “Our 2021 exploration program aims to pick up where our maiden 2020 drill program left off in December, with many completed drillholes at the lab pending assay, drills turning at both our Victor and DPB targets currently and two additional core drill rigs in the process of being secured.  The bulk of our planned 40,000 metre 2021 campaign will be focused on defining a maiden resource on our DPB target by years end, in addition to a significant amount of expansion focused drilling slated for Victor.” 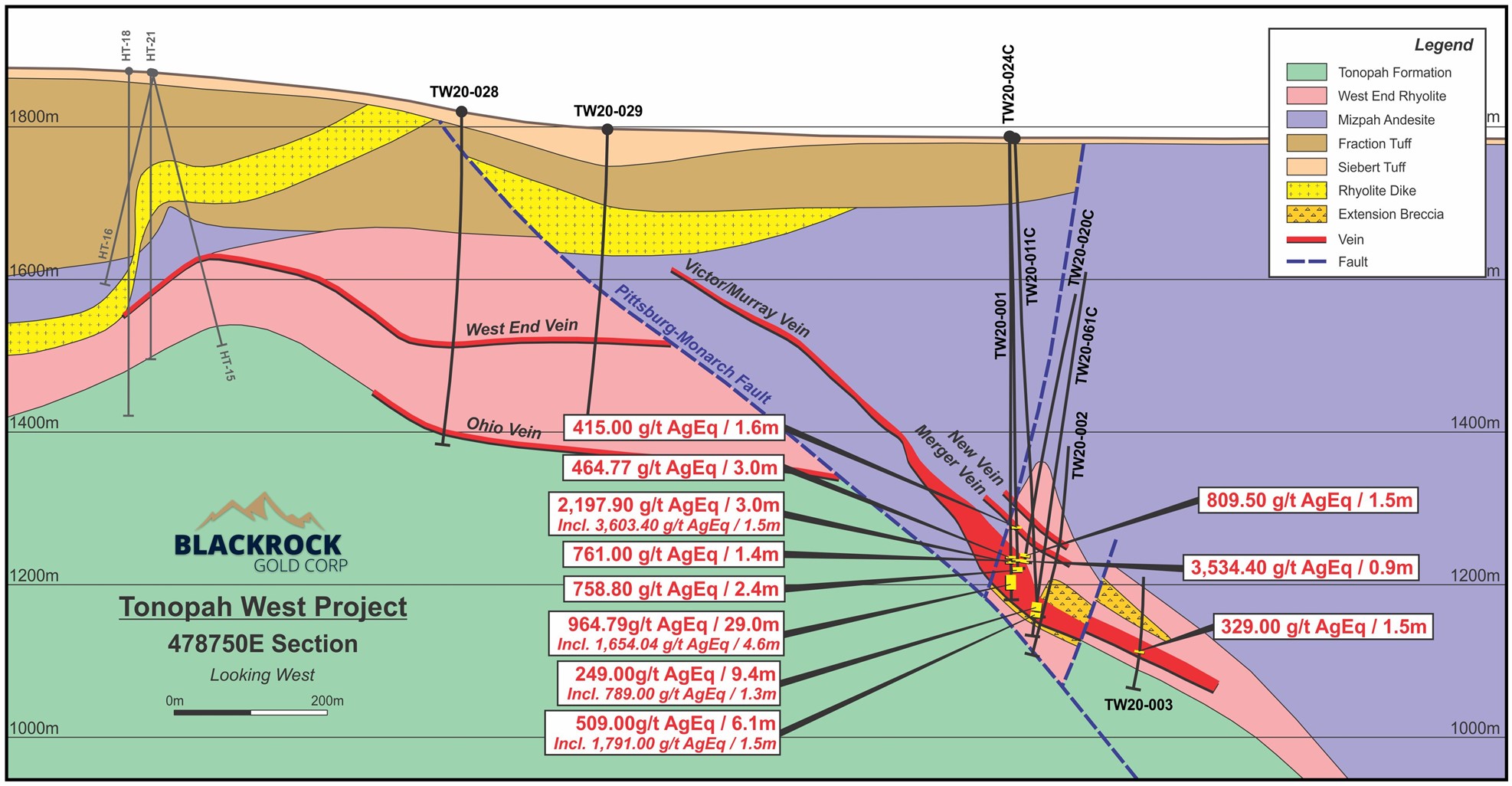 The Company has commenced its 2021 exploration program with drilling currently underway at both the DPB and Victor target areas.

A total of 40,000 metres is anticipated property-wide that will utilize three diamond core drills and one reverse circulation drill.  The core drills will focus on the Victor target and DPB resource delineation while the RC drill will continue at the Step Out target.

The DPB resource definition program will consist of 30,000 metres of diamond core drilling from 20 drill sites within this large multi-vein target.  This broad multi-vein, high-grade system sits within an area measuring 1,000 by 600 metres.  Drilling to date has identified two new veins bringing the total to six veins within the DPB. The 2021 drill program will focus on delineating a resource across all known veins in this area.

Drilling continues at the Victor target with TW20-071C in progress and an additional 5,000 metres of core drilling remaining in the initial program.  With the latest intercept in TW20-041C and TW20-061C showing the continuity of the vein system, the program will shift to expanding the vein zone down-dip and along strike to the east.  Based on competitor drilling completed immediately adjacent to Blackrock’s eastern border,  an additional strike length of 480 metres is envisioned and could upsize the Victor target significantly. Drilling in the Step Out target will begin next month to follow up on the encouraging results announce in TW20-016.  The RC drill will pursue this target. 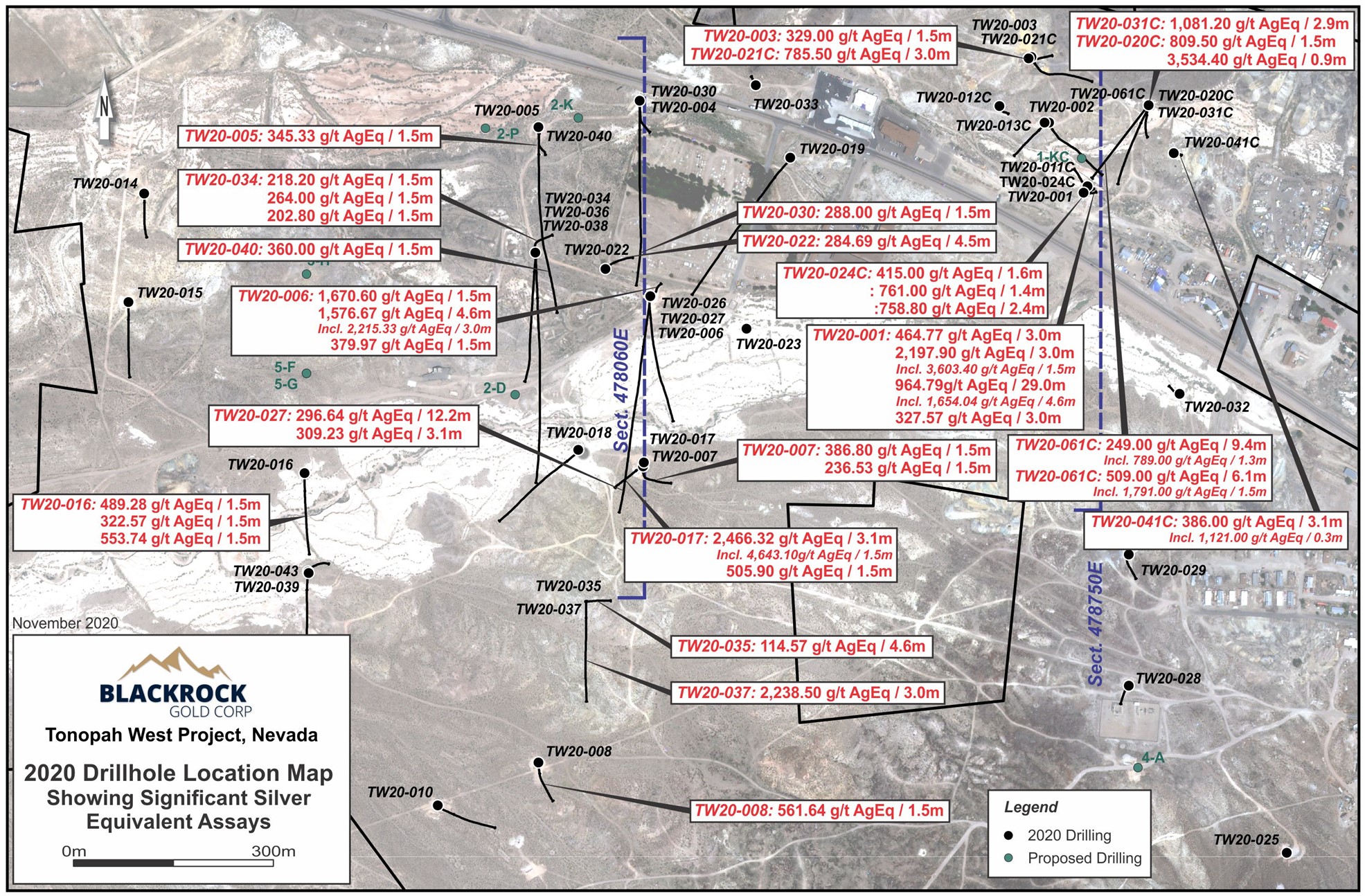 All sampling is conducted under the supervision of the Company’s project geologists, and a strict chain of custody from the project to the sample preparation facility is implemented and monitored. The core and reverse circulation samples are hauled from the project site to a secure and fenced facility in Tonopah, Nevada, where they are loaded on to American Assay Laboratory’s (AAL) flat-bed truck and delivered to AAL’s facility in Sparks, Nevada.  A sample submittal sheet is delivered to AAL personnel who organize and process the sample intervals pursuant to the Company’s instructions.

The core, reverse circulation, and QA/QC samples are crushed and pulverized, then the pulverized material is digested and analyzed for Au using fire assay fusion and an Induced Coupled Plasma (ICP) finish on a 30-gram assay split. Silver is determined using five-acid digestion and ICP analysis.  Over limits for gold and silver are determined using a gravimetric finish.  Data verification of the assay and analytical results are completed to ensure accurate and verifiable results. Blackrock personnel insert a blind prep blank, lab blank or a certified standard approximately every 15th to 20th sample.

Blackrock’s exploration activities at the Tonopah West Project  are being conducted and supervised by Mr. William Howald, Executive Chairman of Blackrock Gold Corp. Mr. William Howald, AIPG Certified Professional Geologist #11041, is a Qualified Person as defined under National Instrument 43-101. He has reviewed and approved the contents of this news release.

About Blackrock Gold Corp.
Blackrock is a junior gold-focused exploration company that is on a quest to make an economic discovery. Anchored by a seasoned Board, the Company is focused on its Nevada portfolio of properties consisting of low-sulphidation epithermal gold & silver projects located along on the established Northern Nevada Rift in north-central Nevada and the Walker Lane trend in western Nevada.

Forward Looking Statements
This news release contains “forward-looking statements” within the meaning of Canadian securities legislation. Such forward‑looking statements concern the Company’s strategic plans, completion and exercise of the Tonopah option agreement, timing and expectations for the Company’s exploration and drilling programs, estimates of mineralization from drilling, geological information projected from sampling results and the potential quantities and grades of the target zones. Such forward‑looking statements or information are based on a number of assumptions, which may prove to be incorrect. Assumptions have been made regarding, among other things: conditions in general economic and financial markets; accuracy of assay results; geological interpretations from drilling results, timing and amount of capital expenditures; performance of available laboratory and other related services; future operating costs; and the historical basis for current estimates of potential quantities and grades of target zones. The actual results could differ materially from those anticipated in these forward‑looking statements as a result of the risk factors including: the ability of the Company to complete the Tonopah lease option, the timing and content of work programs; results of exploration activities and development of mineral properties; the interpretation and undertainties of drilling results and other geological data; receipt, maintenance and security of permits and mineral property titles; environmental and other regulatory risks; project costs overruns or unanticipated costs and expenses; availability of funds; failure to delineate potential quantities and grades of the target zones based on historical data, and general market and industry conditions. Forward-looking statements are based on the expectations and opinions of the Company’s management on the date the statements are made. The assumptions used in the preparation of such statements, although considered reasonable at the time of preparation, may prove to be imprecise and, as such, readers are cautioned not to place undue reliance on these forward-looking statements, which speak only as of the date the statements were made. The Company undertakes no obligation to update or revise any forward-looking statements included in this news release if these beliefs, estimates and opinions or other circumstances should change, except as otherwise required by applicable law.
Neither the TSX Venture Exchange nor its Regulation Services Provider (as that term is defined in the policies of the TSX Venture Exchange) accepts responsibility for the adequacy or accuracy of this release.