Blue Star Gold Corp. [BAU-TSXV] (“Blue Star” or the “Company”) announces additional assay results from the recently completed 7,624 metre diamond drilling program at its Ulu and Hood River properties. The properties are located approximately 525 km NNE of Yellowknife, NT in the Kitikmeot region of western Nunavut. Kugluktuk is approximately 210 km to the NW.

The Ulu lease and the contiguous Hood River property together encompass approximately 9,000 ha of highly prospective exploration ground. The Ulu lease hosts the advanced stage Flood and Gnu gold deposits, where a significant high-grade gold resource has been outlined. A series of gold occurrences occur on-strike and north of the Flood gold zone and are thought to be related to the ~5 km long Ulu regional fold that extends from the Ulu lease on to the north Hood River property culminating at the NFN zone. This structure, called the Robb trend, extends from the Flood and Gnu gold zones along the Ulu fold to the north and hosts at least five gold zones in addition to the Flood and Gnu zones (NFN, INT, Bizen, Apex and Contact zones) (see Figure 1, page 5). The Hood River property is contiguous to the Ulu lease to the north, east and south, and hosts over twenty known gold showings (see Figure 2, page 6). Many of the high-priority target areas outside of the Flood zone have only been tested with relatively shallow drilling, and the potential throughout the properties to host new discoveries at depth is considered high. Refer to the Company’s website to view a 3-D model of the Flood and Gnu deposits.

• The balance of the assay results from the program are expected to be announced over the coming weeks through into early December
• Plans underway to update the Flood and Gnu zone resource model following assessment of all the drill program data. The Flood and Gnu zones have excellent resource expansion potential and it is anticipated that the first resource estimate for the NFN zone will be completed
• Detailed targeting and planning for an aggressive 2021 exploration program will be initiated over the coming months
• The 2021 exploration focus will be: expansion of the high-grade resource base (Flood and Gnu zones), targeting proximal to the resource zones where excellent potential exists for new discovery, and regional targeting over the extensive and highly prospective Ulu and Hood River properties, where numerous high-grade gold showings exist

The program entailed 7,624 metres of diamond drilling in thirty-eight diamond drill holes on the Ulu and Hood River properties. The Flood zone holes were drilled to; provide additional geologic information and confirm certain aspects of the geologic model of the deposit, to improve drill hole density and allow for possible upgrading of the resource category, and to expand the resource base. The Gnu zone hole was drilled to further understand the host structure. The 3 Hood River property holes tested 2 early stage targets (INT and Bizen zones) on the highly prospective property.

Assays results from the balance of the 2020 exploration program will be announced over the coming weeks as they become available. 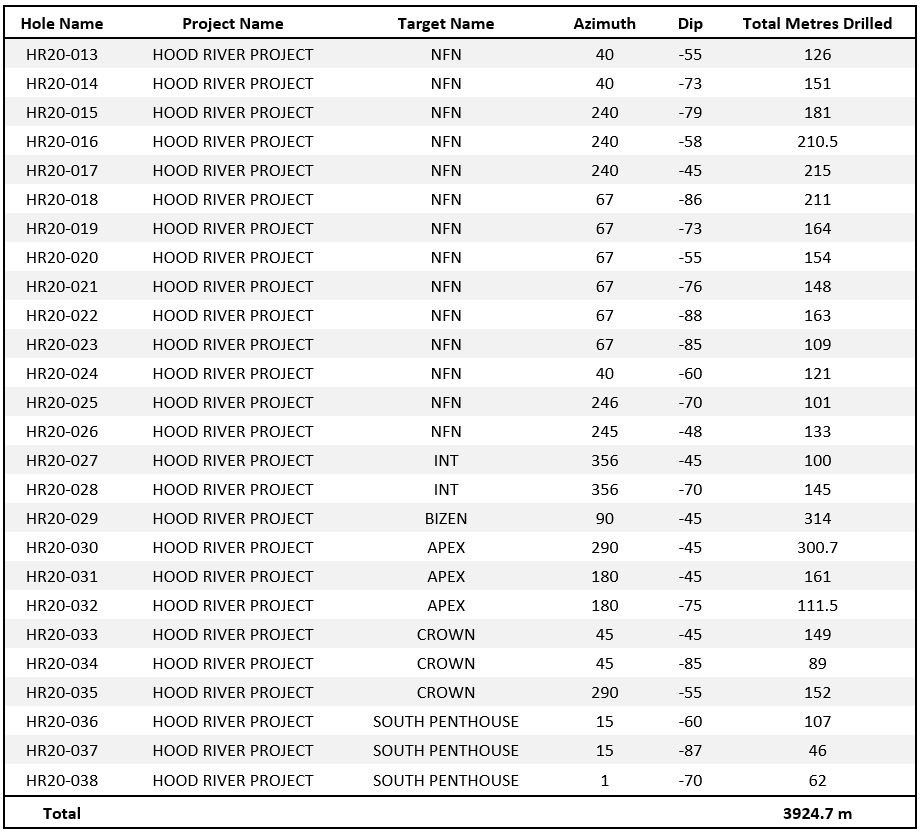 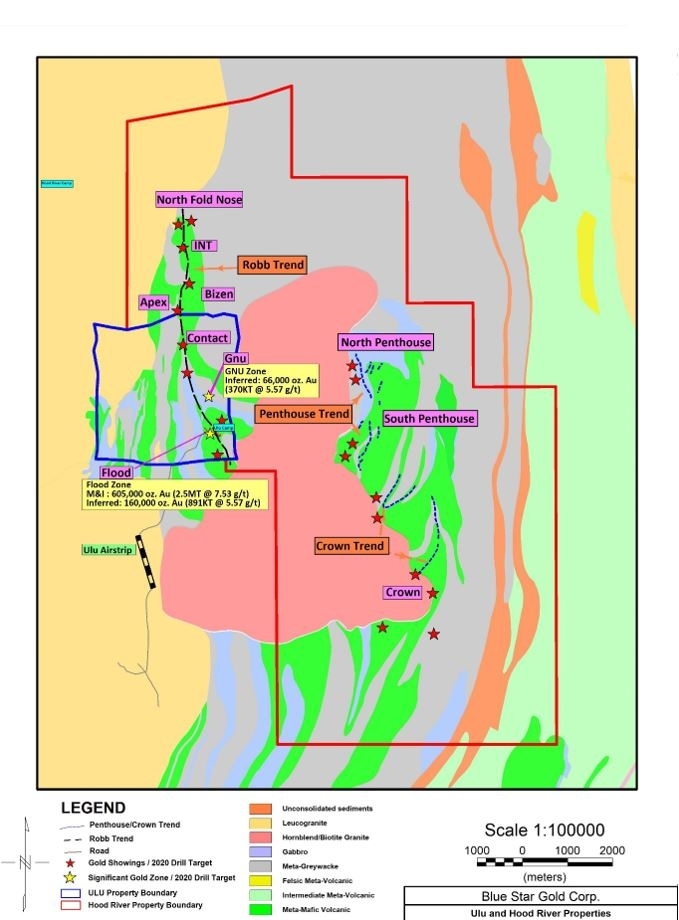 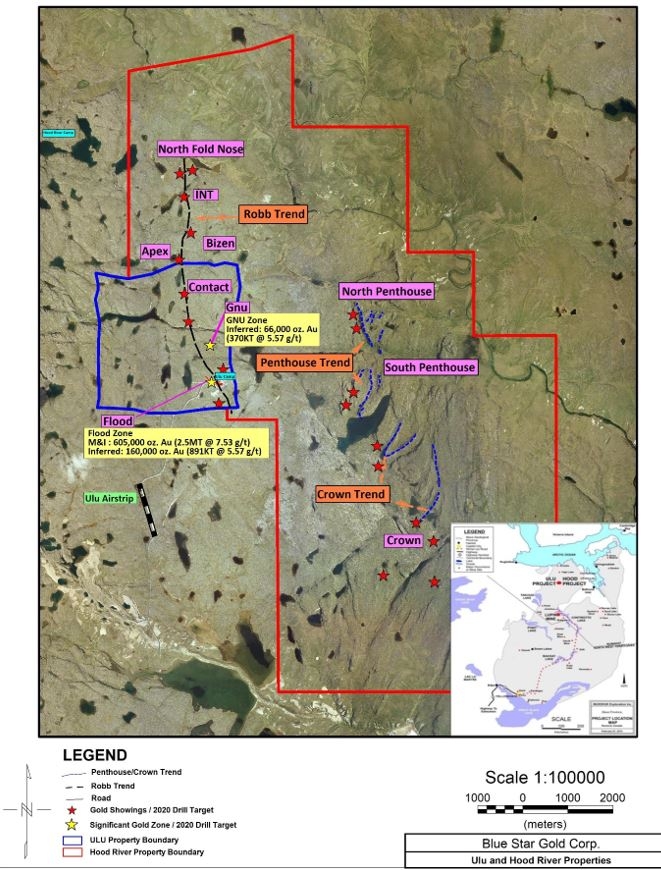 Assay results for 2 holes returned from the Flood zone and 1 hole from the Gnu zone : 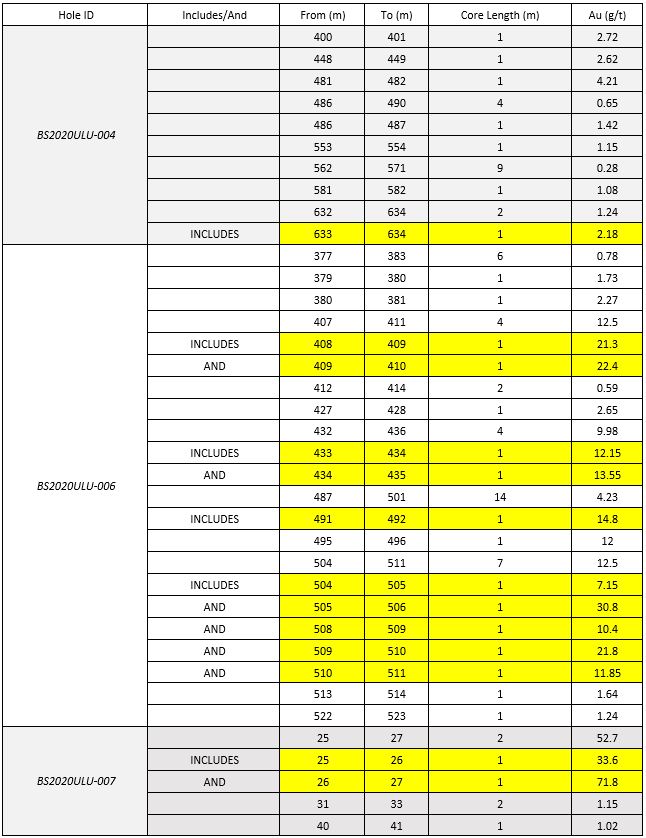 Assay results for 3 holes returned from the Hood River property: 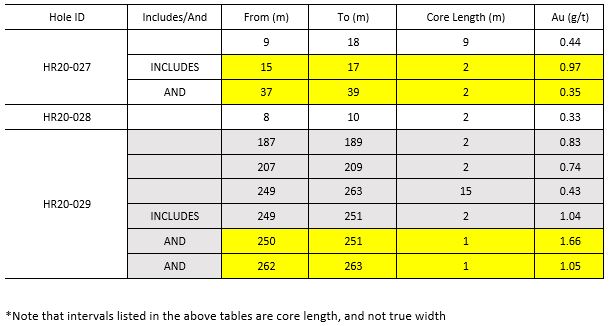 QA/QC Program for the 2020 Exploration Work

All drill core was logged and sampled in secure core processing structures located at the Ulu or Hood River camps.  Drill core samples were collected by either cutting the core in half using diamond saws or by splitting the core in half using hydraulic core splitters. In addition to the QA/QC protocols of ALS Global, the Company maintains its own program of inserting Standard Reference material in the form of standards and blanks into the sampling stream, prior to being shipped to ALS’s preparation facility in Yellowknife.

History and Geology of the Ulu and Hood River Gold Properties

The properties are located approximately 525 km NNE of Yellowknife, NT in the Kitikmeot region of western Nunavut. Kugluktuk is approximately 210 km to the NW.

The Ulu property consists of a renewable 21-year mining lease and covers an area of approximately 947 ha. The lease hosts an advanced gold project that between 1989 and 2012 saw significant exploration and development by BHP Minerals and Echo Bay Mines, among others. The past work includes approximately 1.7 km of underground development and approximately 405 diamond drill holes that produced 97,820 m of core (Ulu and Hood River). The Flood zone contains the bulk of the Ulu gold resource and is open on-strike and at depth. Overall resources of 2.50 million tonnes grading 7.53 g/t Au for 605,000 gold ounces (measured & indicated category) and 1.26 million tonnes grading 5.57 g/t Au for 226,000 gold ounces (inferred category) have been estimated for the Flood and Gnu zones (refer to “Technical Report on the Ulu Gold Property, Nunavut, Canada” dated July 10, 2015). The deepest intersection of mineable width at the Flood zone is 14.9 g/t Au over 7.7 m in BHP’s drill hole 90VD-75 at 610 m below surface. Metallurgical testing on the Flood zone gold mineralization has shown that gold is recoverable in amounts greater than 90% by gravity, flotation and cyanidation.

The Hood River property is contiguous to the Ulu lease to the north, east and south. The property is held through a renewable, 20 year Mineral Exploration Agreement with Nunavut Tunngavik Incorporated. The highly prospective property encompasses 8,015 ha. At least 22 known gold showings have been identified on the property. The exploration target for the property is shear-hosted gold mineralization similar to the Flood zone on the adjacent Ulu lease.

A series of gold occurrences occur on-strike and north of the Flood gold zone and are thought to be related to the ~5 km long Ulu regional fold that extends from the Ulu lease onto the north Hood River property culminating at the NFN zone. This structure, called the Robb trend, extends from the Flood and Gnu gold zones along the Ulu fold to the north and hosts at least five gold zones in addition to the Flood and Gnu zones (NFN, INT, Bizen, Apex and Contact zones).

Gossanous auriferous rocks hosted within mafic volcanic units at or close to the contact with meta-greywacke rocks occur along the Robb trend. The gold mineralization is commonly enveloped by an alteration halo of biotite-actinolite-quartz. The mineralized zones are believed to be the result of brittle-ductile failure caused by regional stresses during different deformation stages. Along sedimentary-volcanic contacts, regional folding causing shearing, due to lithological competency contrasts, resulted in minor dilatancy. These dilatational zones were in-filled with the gold-arsenic-rich hydrothermal fluids. Mineralization shows pinch and swell style.

Several high-grade gold occurrences also occur on the east Hood River property, including the Crown and Penthouse zones, where gold trends with similarities to the Robb trend may exist. In addition, many unnamed gold occurrences exist on the two properties, where further prospecting is required to advance the showings to target zones. The large number of high-grade gold showings that occur throughout the properties provide for excellent resource expansion potential at multiple targets.

Supplementing the high-grade gold resources, the Ulu project includes a substantial inventory of capital equipment, a Weatherhaven camp with shop and a 1,200 m long airstrip. The site of the future deep-water port at Grays Bay is 100 km to the north of the properties, and the proposed route corridor for the all-weather Grays Bay road passes in close proximity to the Ulu and Hood River projects. 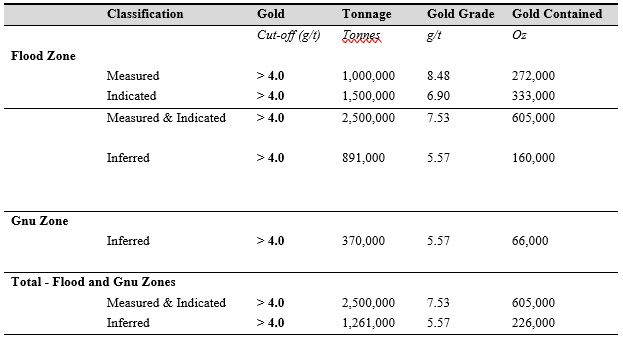 Notes to the Resource Estimate

Warren Robb P.Geo. a Qualified Person under National Instrument 43-101 (“NI 43-101”), has reviewed and approved the geological information contained in this news release.

Blue Star is a Vancouver-based gold and silver company focused on exploration and development within Nunavut, Canada. The Company owns the Ulu Gold Property lease, an advanced gold and silver project, and the highly prospective Hood River gold concessions that are contiguous with the Ulu mining lease. The combined properties total approximately 9,000 ha of prospective mineral claims within which the Company has a significant high-grade gold resource on the Ulu lease, and numerous high-grade gold occurrences and priority targets throughout the Ulu and Hood River properties.

Neither the TSX Venture Exchange nor its Regulation Services Provider (as that term is defined in the Policies of the TSX-Venture Exchange) accepts responsibility for the adequacy or accuracy of this Release.

This press release contains “forward-looking statements” within the meaning of applicable securities laws. Forward-looking statements can be identified by words such as: “anticipate,” “intend,” “plan,” “goal,” “seek,” “believe,” “project,” “estimate,” “expect,” “strategy,” “future,” “likely,” “may,” “should,” “will” and similar references to future periods.  Examples of forward-looking statements include, among others, statements we make regarding prospective income and revenues, anticipated levels of capital expenditures for fiscal year, expectations of the effect on our financial condition of claims, litigation, environmental costs, contingent liabilities and governmental and regulatory investigations and proceedings, and estimates of mineral resources and reserves on our properties.

Forward-looking statements are neither historical facts nor assurances of future performance.  Instead, they are based only on our current beliefs, expectations and assumptions regarding the future of our business, future plans and strategies, projections, anticipated events and trends, the economy and other future conditions.  Because forward-looking statements relate to the future, they are subject to inherent uncertainties, risks and changes in circumstances that are difficult to predict and many of which are outside of our control.  Our actual results and financial condition may differ materially from those indicated in the forward-looking statements.  Therefore, you should not rely on any of these forward-looking statements.  Important factors that could cause our actual results and financial condition to differ materially from those indicated in the forward-looking statements include, among others, the following: economic and financial conditions, including volatility in interest and exchange rates, commodity and equity prices and the value of financial assets, strategic actions, including acquisitions and dispositions and our success in integrating acquired businesses/our success in integrating the Ulu Gold Property into our operations, developments and changes in laws and regulations, including increased regulation of the mining industry through legislative action and revised rules and standards applied by the regulatory bodies in Nunavut, changes in the price of fuel and other key materials and disruptions in supply chains for these materials, closures or slowdowns and changes in labour costs and labour difficulties, including stoppages affecting either our operations or our suppliers’ abilities to deliver goods and services to us, as well as natural events such as severe weather, fires, floods and earthquakes or man-made or other disruptions of our equipment, and inaccuracies in estimates of mineral resources and/or reserves on our mineral properties.