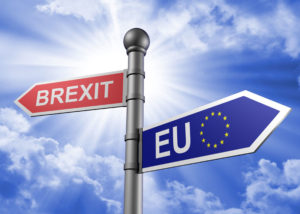 In a most surprising fashion, we have all just witnessed a possible world-altering event called “Brexit” or BRitish EXIT from the European Union. On June 23, 2016, the British people voted in favour of a plebiscite which asked the question whether Britain should leave the European Union of Nations (EU).

The oft-stated arguments leading up to the actual vote appealed to both reason and emotion. On the “Leave” side, two sentiments were frequently repeated.  First, the EU rules imposed on Britain from the outside required open immigration policies which specifically involved huge increments of Muslim immigrants into Britain, a matter of deep concern to many Brits. Second, in the interpretation of many Brits, regulatory actions by the EU bureaucracy have become so numerous and so intrusive that a clear diminishment of the quality and liberty of life in Britain has been taking place.

Those arguing for Britain to stay inside the EU expressed the view that open access to the European continental markets as administered through the EU had been of great benefit to British creators of products and services and the British economy would suffer without that unfettered access. Also, travel between Britain and the remainder of the EU countries had been greatly facilitated by the open borders policies now in existence.

Passions were already at a high level when a truly tragic event occurred with the assassination of a British Member of Parliament (MP) Jo Cox, an opponent of Brexit, just one week before the voting. This event seemed to have helped the “stay” side since many people became alarmed at the intensity of the “Exit” advocates and scores of voters indicated a change of sentiment toward “Remain.”

As the vote seemed to move toward the “stay” side immediately following the assasination, two market observations quickly took place. First, securities markets rallied decisively around the world and gold, which had been previously rallying to as high as US $1,320/oz, quickly turned south and lost more than US $60 within a few sessions.

Then came the actual day of voting with the stunningly surprising result to leave the EU and, by implication, to regain at least a strong measure of British self-government.

Perhaps more than any other factor it was the sudden break from expectations that brought about market reactions which were startling to say the least. After the assassination noted above, commentators had become totally convinced that the “Remain” side would win by a decisive margin. Therefore, it came as a total shock that the BBC and other media suddenly announced after about two hours of vote counting that not only was the “Leave” side ahead, but according to that network’s data analysis, they were declaring that side to be victorious.

Within moments of that declaration, here are some of the market actions which took place:

International market turmoil was illustrated by the stunning drop of 900 points in America`s Dow Jones Industrial Average within the first two days after the voting.

However, it must be noted that once the initial shock had been absorbed, each of these moves has reversed to a considerable extent as some market equilibrium was finally restored.

Analysis now seems to be centred on determining exactly why the British electorate delivered their stunning verdict. Those supporting the “Leave” side pointedly stressed growing unhappiness with the immense power which the Brussels bureaucracies had garnered and how the British Parliament was rendered almost purposeless, since many important laws were now being written by EU operatives rather than Britain’s elected politicians.

As noted earlier, particular anger was aimed toward the EU’s open immigration policies which had become the law of the land for Britain. Fears were actually expressed that Britain was beginning to lose its British culture and identity under these measures.

Boris Johnson, who had become the chief spokesman for the “Leave” side, told the Daily Telegraph newspaper that he was concerned about Britain paying huge sums into the EU while those funds were being drained by countries such as Greece, Portugal, Italy and Spain. He also noted that if the “Leave” side won, Britain would then be able to, “…do free trade deals with the growth economies of the world in ways which were now forbidden…”

There were also understated fears that the relatively simple original EU concept of individual nations gathering for a common purpose but retaining their own individuality was gradually transforming into the creation of a European “Super-state” and the London Express newspaper wrote that, “The foreign ministers of France and Germany are due to reveal a blueprint to do away with individual member states…under the radical proposals countries will lose the right to have their own army, criminal law, taxation system or central bank, with all those powers being transferred to Brussels.”

Those advocating “Remain” focused their arguments on the ideas that Britain had done well economically under the EU; that her citizens gained substantially from the ease of travel throughout Europe; and also that since the world was already in a slow-growth mode, it would be dangerous indeed to upset the world’s economic systems with the kind of drama which could ensue if the “Leave” side was victorious.

Wider philosophical issues were also considered. Since WWII, the world had witnessed the growth of supra-national agencies where individual countries became subservient to collective organizations. There were as varied as the World Health Organization; the World Trade Organization and the United Nations; defense organizations such as NATO, SEATO and the OAS; financial systems such as the International Monetary Fund, Bank for International Settlements and, of course, the European Union itself. Many people within Britain expressed a desire to reverse this trend and restore British self-determination.

Political forces also gathered with the political Right generally favouring “Leave” while those forces on the Left generally bent toward the “Remain” side.

The great question now being debated is just how important the vote result will be in the great international scheme of things. Opinions at present range from relatively minor to approaching great trauma with most agreeing that it will take some time to sort things out, to use a British expression.

What appears to be most important from a precious metals perspective is the degree of uncertainty which the “Brexit” vote engenders. As was amply demonstrated in the early hours after the results were known and uncertainty was at its height, gold soared in that environment.  We also observe that in the days subsequent to the vote as uncertainty has diminished, gold has stabilized somewhat.

Therefore, we can express the view that if the world seems to be successful in adapting to the vote without undue upheavals, gold and silver may not perform well. However, should serious and unexpected difficulties appear, particularly if they are in combination with already-existing problems which might be regarded is unsolvable, we could then anticipate strength, perhaps of a surprising nature, in gold and silver.

In a lengthy interview on June 27, former US Fed Chairman Alan Greenspan alluded to such problems when he declared that the world was already faced with a potential calamity in the shape of rapidly growing numbers of elderly which will put immense pressure on world financial systems already crippled with debt and simultaneously struggling with persistently low rates of productivity growth.

He also noted that the success of the “Brexit” vote could lead to other EU nations being encouraged to take actions similar to Britain’s and he also suggested that, to make things even worse, the EU could no longer support Greece’s pathetic economic situation and might be forced to compulsively oust them from the EU.

As of this moment, uncertainties do abound and it will be most interesting to observe watch gold and silver’s roles as ‘thermometers’ of uncertainty levels going forward.