Except for during two World Wars and a temporary mining-unfriendly provincial government, British Columbia has been viewed as an attractive exploration destination since the Gold Rush of 1858.

British Columbia has a complex geological history that fortuitously hosts a wide variety minerals and deposit types. The province is Canada’s largest exporter of steel-making coal (Teck Resources) and a leading producer of copper (Teck’s Highland Valley, Taseko’s Gibraltar Mine and Copper Mountain), and Canada’s only producer of molybdenum. British Columbia is also a significant producer of gold, notably Pretium’s Brucejack Mine, the Kamloops area and the rich, past-producing Bralorne area.

British Columbia is also home to over 200 gold exploration projects from the United States border in the south to the Yukon border in the north..

Many mines have more than one valuable mineral commodity such as New Gold’s New Afton gold-silver-copper mine near Kamloops. Copper-gold deposits are particularly prospective in the current price environment.

Southeastern BC has been a region noted for silver, lead, and zinc mines where today both base metal and gold exploration programs are underway. Over 30 industrial minerals are also produced in B.C., including gypsum, magnesite, limestone, and dimension stone.

To encourage mining, the provincial government provides tax incentives and a well-developed infrastructure, including low-cost electricity, an integrated road and rail network, and large deep-water ports.

Prospectors and explorers have access to an extensive B.C. geoscience database and a web-based mineral tenure system for online claim staking. Map-staking not only enables absolutely accurate claim boundaries, it also helps prospectors and exploration companies to stake claims in BC’s sometimes extremely rugged mountainous terrain where physical claim staking would be impossible.

Despite COVID-19 restrictions and protocols, the mining sector carried on during 2020. There were a number of project acquisitions, proposed mergers, resource expansions and new discoveries. Artemis Gold Inc. acquired the Blackwater Gold Project from New Gold Inc. for approximately $210 million. The project has both provincial and federal environmental assessment approval. BW Gold Ltd. (a 100%-owned subsidiary of Artemis) plans to start construction in Q2, 2022.

In November 2020, Serengeti Resources Inc. signed an agreement to acquire all issued shares of Sun Metals Corp. to consolidate the contiguous copper-gold exploration and development assets of the Kwanika and Stardust projects for a double-barreled shot at success.

In December, Seabridge Gold purchased the Snowfield deposit from Pretium Resources for US$100 million.

As in the past few years, there have been a number of exploration programs underway in the Golden Triangle region of northwestern BC where there are two producing mines – Pretium’s Brucejack gold mine and the Imperial Metals Red Chris copper-gold mine.

The Ministry of Energy, Mines and Low Carbon Innovation forecasted the total value of mine production for 2020 at $9.28 billion) including coal, copper, gold, industrial minerals, aggregate, molybdenum, and silver. This is $0.48 billion more than the 2019 preliminary estimate by the Ministry using Natural Resources Canada values and estimate of $8.80 billion and is mostly due to an increase in gold and copper prices.

Metal mines accounted for $4.39 billion (forecast) of all mine production in 2020, representing about 47% of total output. Despite the COVID-19 pandemic, provincial mining production and exploration expenditures improved over the previous year.

Being on the Pacific Ocean is a huge advantage with several Vancouver area ports as well as Prince Rupert and Stewart up the ice-free coast, enabling year-round quick access to global markets. It’s over 4,000 km further from the Port of Los Angeles to Tokyo than from Vancouver to Tokyo.

In this time of record copper prices and +US$1,867 an ounce gold, British Columbia’s prospectivity for those metals is even more compelling. 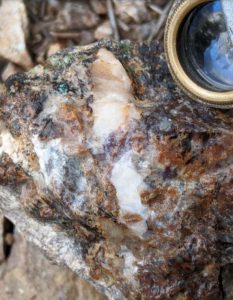 The company’s objective is to define an economic world-class copper-gold porphyry deposit. The experienced management team with a track record of exploration success is of the view there is a high probability of a quartz feldspar porphyry intrusion discovery based on a number of compelling geological clues. These include the fact that the property hosts a known porphyry intrusive with soil and outcrop sampling coincident with magnetic and IP geophysical surveys. These important characteristics are bolstered by a single deep drill hole from 1975 totaling 333 metres that intersected 142 metres of pervasive chalcopyrite (copper) at the bottom of the hole. Surface grab sampling returned assays up to 0.54% copper and 1.7 g/t gold.

Size matters with porphyry deposits and it is encouraging that the high chargeability IP anomaly measures 1.2 km in diameter which increases in size and strength with depth.

Of note, geophysical surveys detected a magnetic high under cover to the north that indicates another possible porphyry intrusion. 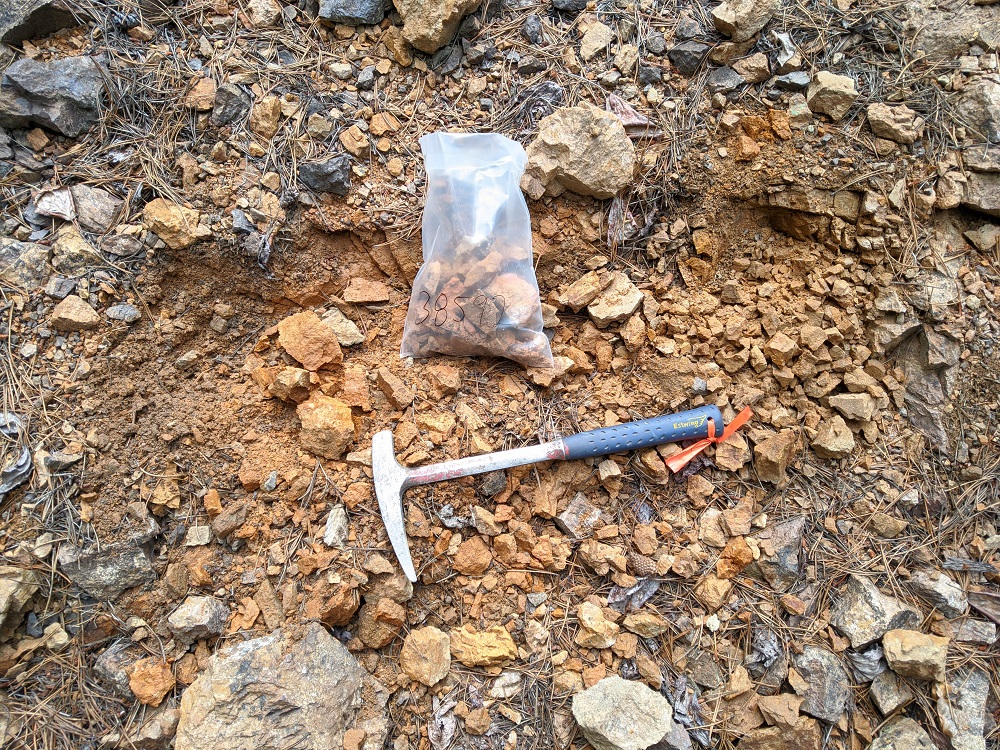 The Dungate Project is in a region of successful mining operations, including the past producing Equity Silver Mine 26 km to the south, the Imperial Metals Huckleberry Mine and the more recent gold-silver discovery of Sun Summit Minerals at their Buck Project 7 km to the south (17 metres of 5.86 g/t gold).

The gentle terrain and easy road access to the centre of the property on the Equity Silver Mine road means low exploration costs and year-round drilling. There is access to electrical and gas utilities. Drill permits are expected in June for a six-hole summer drilling program to test mineralization at depth.

Edgemont Gold has checked all the geophysical and geological boxes for a potential significant copper-gold porphyry discovery and with $1.94 million in its treasury, the company is well funded for the current drilling program. Edgemont Gold has only 23,756,501 shares issued 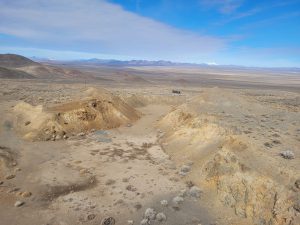 P2 Gold Inc. [PGLD-TSXV] was formed in 2020 by a management team with a track record of successfully exploring, financing, and developing mining projects. Management, including Joe Ovsenek, President and CEO, held senior positions with Pretium Resources and Silver Standard Resources.

The company’s business strategy is to focus on early-stage precious metals and copper projects in western North America.

P2 Gold recently closed the acquisition of the Gabbs Gold-Copper Project in Nevada. To acquire the property, under the terms of an agreement with a wholly-owned subsidiary of Waterton Precious Metal Fund II Cayman LP, P2 Gold paid US$1 million and issued 15 million shares in its capital to Waterton at closing.  In addition, P2 Gold is required to pay (a) US$4 million to Waterton on the 12-month anniversary of closing and (b) pay US$5 million to Waterton on the earlier of the announcement of the results of a Preliminary Economic Assessment and the 24-month anniversary of closing.  Waterton has reserved for itself a 2% net smelter returns royalty on production from the Gabbs Project, of which one percent may be repurchased at any time by P2 Gold for US$1.5 million and the remaining one percent of which may be repurchased for US$5 million.

To finance the acquisition of the Gabbs property, P2 Gold arranged a non-brokered private placement consisting of 11,898,060 units at 50 cents per unit for gross proceeds of $5,949,030. Each unit consists of one share and one share purchase warrant. Each warrant is good to buy one additional share at an exercise price of 85 cents for two years. 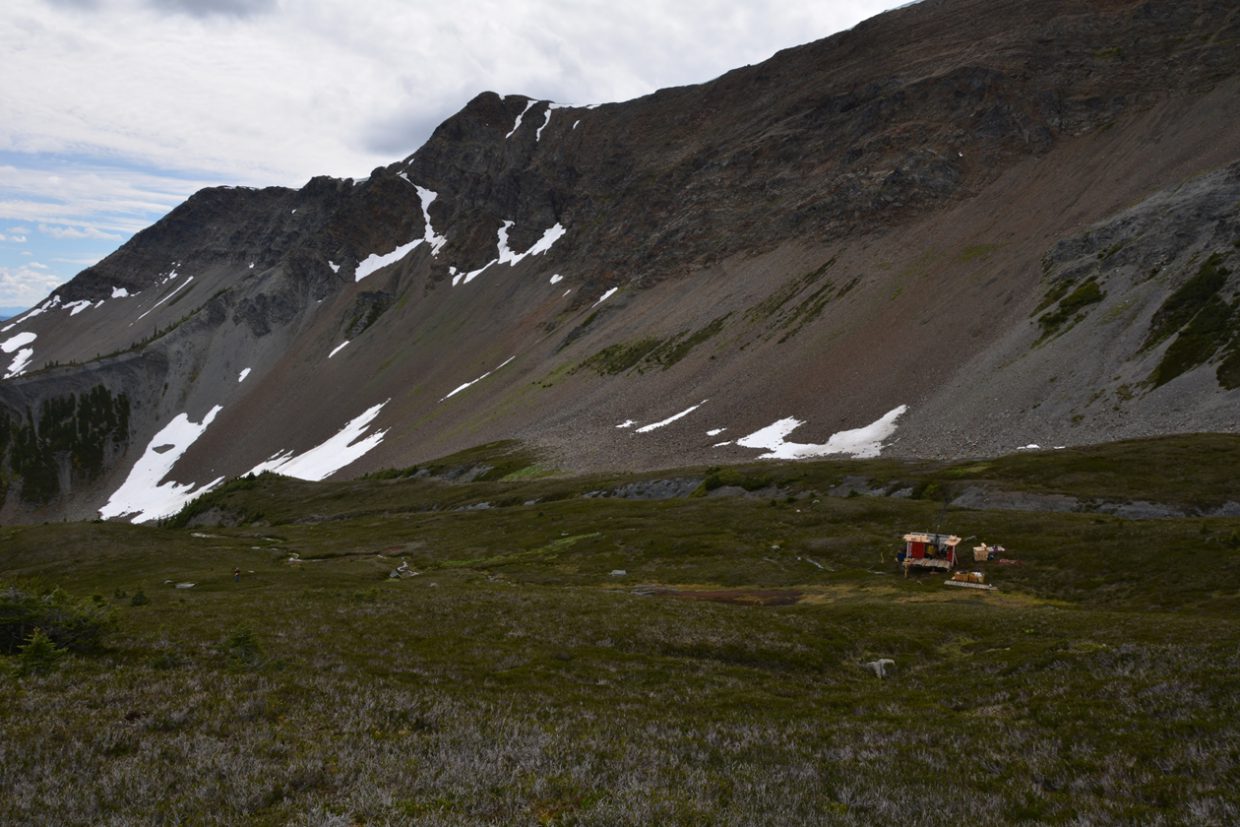 Located on the Walker Lane Trend near the small community of Gabbs and 45 miles from the Town of Hawthorne, west-central Nevada, access is via by State Hwy 361. The Gabbs Pole Line Road and a power line cross the property.  Water is available with a groundwater permit.

Following completion of the acquisition of the Gabbs property, a CDN$2.5 million exploration program will commence that includes geophysical surveys in June and a drilling program this summer, subject to drill availability. Specifically, the company will conduct ground geophysics, a satellite hyperspectral survey, mapping and sampling. Drilling will comprise 8,000 metres of diamond and RC holes, plus more metallurgy.

The upcoming drill program will re-drill known zones of mineralization with a drill hole spacing for a minimum Indicated Mineral Resource category. This would be followed by an updated Mineral Resource estimate by mid-2022, with infill and expansion drilling continuing through 2022. A PEA is planned for H1 2023 and a Feasibility Study in H2 2025.

The company has three early-stage prospective properties in British Columbia. P2 Gold is earning a 100% interest in the 8,100-hectare BAM Project in the prolific Golden Triangle region of northwest BC located approximately 150 kilometres northwest of Stewart. The property is 1.7 kilometres from the Galore Creek Project access road.

Also in the Golden Triangle, the 70%-optioned 32,000-hectare Todd Creek Project is approximately 35 kilometres northeast of Stewart. The 2020 exploration program intersected high-grade copper (8.8 metres of 0.51% copper and 10.6 g/t silver, including 1.2 metres of 1.48% copper and 30.6 g/t silver). For 2021, the program will test extensions of mineralized structures at depth.

Further east, at the 100%-optioned +23,000-hectare Silver Reef Project 85 kilometres north of Hazelton, the highest-grade grab sample yielding 1,892 grams per tonne silver, 2.01 grams per tonne gold, 4.46% lead, and 2.7% zinc from a massive sulphide vein subcrop. For 2021, drilling will test for the source of the high-grade silver.

There is still snow cover on the BC properties; however, preparations are under way for field exploration to start in mid-June.

P2 Gold also has two properties in east-central Oregon – the 6,790-acre leased epithermal gold Stockade property and the 2,190-acre Lost Cabin gold prospect which are both held under a lease and option agreement.

P2 Gold has assembled a compelling portfolio of gold and gold-copper projects in secure jurisdictions and, under professional management, the company is optimistic about building resources at Gabbs and making further discoveries at its other prospects.