While there are ups and downs in the British Columbia mining industry due to various events and circumstances, Canadaâ€™s western province has been and will continue to be an attractive jurisdiction for a variety of metals and mineral commodities.

The mining sector in BC has now grown to the point where gross mining revenues were $11.4 billion in 2019. Also, in that year, the BC government made the mining flow-through share tax credit and the BC mining exploration tax credit permanent. This has proved to be a boon for junior explorers raising funds to explore their projects.

â€œBC mining companies are in a good position to build on their successes by further embedding resilience into their business models,â€ said Mark Patterson, BC Mining Leader, PwC Canada. â€œThe environmental, social and governance work that has already been established in BC has the potential to create an internationally-recognized ‘Made in BC’ label. High environmental standards, strong relationships with communities, and the unwavering commitment to health and safety, will help BC mining companies succeed in uncertainty.â€

Back in 2018, gold accounted for 43% of total exploration expenditures, almost double that of copper. In 2019, however, investors shifted spending across commodities, with gold, copper and coal together contributing 82% to total spending.

These figures are according to theÂ British Columbia Mineral and Coal Exploration SurveyÂ carried out by the provincial Ministry of Energy, Mines and Petroleum Resources, the Association for Mineral Exploration and Ernst & Young, based on responses provided by 29 prospectors and 171 companies operating in BC, which collectively represent 326 projects across the province.

In addition to the potential discovery of new mineral deposits, some companies are exploring past-producing mines that have solid geological evidence that the old timers missed valuable mineralized zones or what was uneconomic in earlier times with low metal prices may now be economically viable with todayâ€™s higher metal prices.

For example, Blue Lagoon Resources is exploring its Dome Mountain Gold Project in northern B.C. that was a small producer at 12.0 g/t gold. On Northern Vancouver Island, Roughrider Resources has targeted the Empire Mine Project that hosted three-past-producing open pit mines and two past-producing underground mines that produced magnetite, copper, gold and silver.

While the COVID-19 pandemic has affected every industry, including mineral exploration, there is no reason to doubt that junior explorers, being natural entrepreneurs, will eventually be able to return to full-scale operations. However, exploration is still being carried out (carefully) despite COVID-19. 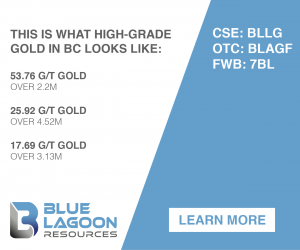 Blue Lagoon Resources [CSE: BLLG; FSE: 7BL; OTCQB: BLAGF] just maybe one of the most exciting junior exploration companies in Canada that holds both an environmental permit and a mining permit. The company has assembled four prospective gold and copper properties in British Columbia and is currently focused on its flagship high-grade gold property â€“ the past producing Dome Mountain Gold Project thatâ€™s located 60 km east of Smithers, a short 50-minute drive from the town.

The Dome Mountain gold mine, which once was a small producer that averaged 12.0 g/t gold, has had approximately $68 million spent on exploration and development by various operators, with $28 million of that spent in the last 12 years on mine infrastructure, development and permitting. The property is heavily mineralized with 15 known mesothermal quartz-carbonate-sulphide vein systems, of which only the Boulder vein system has been relatively well explored with minor exploration carried out on 15 others along a cumulative 20-km strike length. 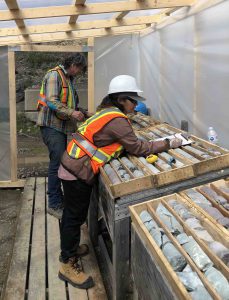 Grab rock samples and drill intersections from drilling over veins and brecciated areas show grades ranging from 0.6 to 190 g/t gold and 10 to 1,809 g/t silver. There is potential to expand the Main Boulder vein system along strike in both directions and to depth.

A Phase I, 3,800-metre, drilling program has been completed that was designed to upgrade a significant portion of the inferred mineral resource to the indicated category by infill drilling and drilling the upper and eastern margins of the Boulder vein system. Recent drilling has returned impressive numbers, including 25.92 g/t gold and 169.46 g/t silver over 4.52 metres. There are also numerous untested vein targets on the property that will be followed up with a planned 20,000 meter drill program scheduled to start on January 11, 2021.

Over 90% of the property remains unexplored. 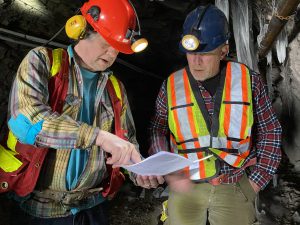 The all year-round road-accessible Dome Mountain Gold Project holds both an Environmental Management Act Permit (EMA) and a Mining Permit providing for up to 75,000 tonnes of production annually. The company is working on completing the three main outstanding requirements in order to amend its existing Mining and Environmental permits and gain permission to recommence mining. The expected timeline for completion of these amendments is in the second quarter of 2021.

Blue Lagoon Resources has a milling and profit sharing agreement to utilize Nicola Miningâ€™s processing facility near Merritt, BC where 6,691 tonnes grading 9 g/t gold were processed in 2016. The mill recovered 1,517 ounces of gold and 8,026 ounces of silver at a 95% gold and 85% silver recovery. 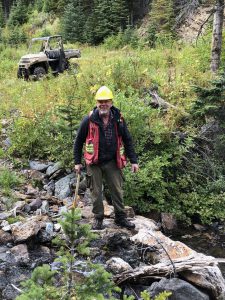 Other projects that give Blue Lagoon additional value include the Big Onion porphyry copper-molybdenum project which is only 16 km east of Smithers and a short 20-minute drive from the town. A historical NI 43-101 (2010) resource estimate totaled 686,800,000 lbs copper grading 0.32% copper (CuEq) in the indicated category and 64,300,000 lbs copper grading 0.28% (CuEq) in the inferred category. A 2016 heliborne magnetic geophysical survey and ground IP defined a number of drill ready targets which point to a low risk opportunity to increase the overall resource significantly.

Also in northwest BC, the 7,327-hectare Golden Wonder Project is located one kilometre south of Yellowhead Highway. Summer 2018 exploration included the collection of 85 rock samples from the mineralized trend with 22 of the 85 samples contained greater than 0.5 g/t gold. Peak values included 18.2 g/t gold and 1.91% copper and 18.7 g/t gold and 0.97% copper. Geophysical and geochemical soil surveys have also been conducted.

Further south about 160 km southwest of Williamâ€™s Lake in the Chilcotin range of south-central British Columbia, Blue Lagoon holds the 7,119.69-hectare Pellaire Gold Project. A considerable amount of exploration has been carried out at Pellaire with 10 gold and silver-bearing quartz veins identified. Some 24,000 tonnes of stockpiled material is on surface that could potentially generate early cash flow. Infrastructure available to the Pellaire property includes a 20-man exploration camp with cabins, a cookhouse, laundry facility and mine dry.

Headed by Rana Vig, CEO, Blue Lagoon has a strong management team with over a hundred years of experience and a proven ability to raise capital. The company has a healthy treasury with over $6 million and no debt, more than enough to execute on its 2021 plans.

The companyâ€™s advanced-stage Dome Mountain Gold Project with its off-take agreement for milling can launch Blue Lagoon as an independent gold producer with lots of â€˜blue skyâ€™ for that project as well as its Big Onion, Golden Wonder and Pellaire projects. 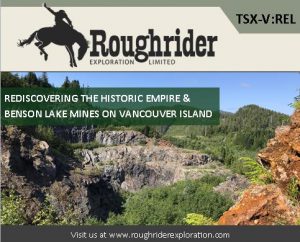 Total consideration to the vendor over five years is $1,250,000 in cash payments, issuing 3 million common shares and work commitments of $2 million, subject to a 2% NSR of which 1% may be purchased for $1 million.

After signing the letter of intent in June 2020, Roughrider immediately doubled its land position to over 15,000 hectares by staking prospective ground.

The Empire Mine property has seen >100 years of mining and exploration and occurs in an area of extensive logging roads, an adjacent limestone quarry and the Raging River Hydroelectric facility. It also has good year-round road access and tidewater ports at Port McNeil and Port Alice. 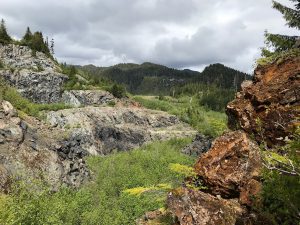 Along the lower elevations (~150 m A.S.L) of the Empire Mine property the Old Sport/Coast Copper Mine produced 2.6 million tonnes of material (the northern portion of which is not on the current property) from conformable skarn horizons near the base of the Quatsino Limestone. To the south of the Old Sport Mine and along the same horizon theÂ  Benson Lake Mine produced 90,184,161 lbs copper, 377,165 oz of silver and 126,386 oz of gold between 1967-1972. Grades averaged 1.57% copper, 4.48 g/t silver and 1.48 g/t gold.

Of note, when Cominco closed the Benson Lake Mine in 1972, they reported remaining developed reserves stood at 454,449 tonnes averaging 1.3% copper, 0.6 g/t gold and 33% iron. These reserve figures predate NI 43-101 standards and must be regarded as historical. However, it is clear that substantial resources remain at Benson Lake.

Empire Mine Development (~700 m A.S.L) recovered 3.37 million tonnes of magnetite from the Merry Widow, Kingfisher and Raven pits and Kingfisher adit between 1957-1967. Interestingly, as magnetite was the target metal, miners avoided the chalcopyrite (copper) and pyritic zones and lenses to avoid contamination of the magnetite concentrate. 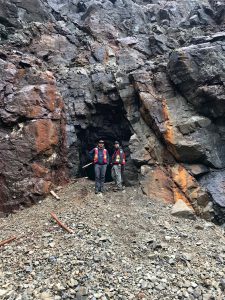 The previous exploration results and mining along favourable >6 km long airborne magnetic and geological trends with at least 22 documented mineral occurrences attest to the exploration potential of the area for copper-gold skarn deposits with interesting silver, cobalt and magnetite credits. 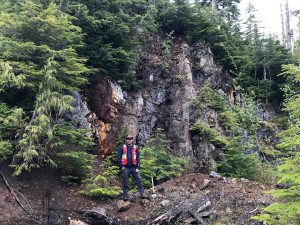 Roughrider followed up with a similar program in late November with assay results still pending.

Roughrider also recently completed the collection of a further 275 soil samples, 15 rock samples and 17 stream sediment samples in November mainly from the Snowbird and SW Anomalies areas, further attesting to the near year round exploration season.

Roughrider has planned a Phase 2, >$1 million exploration program that would include detailed geophysical surveys, a ground geological review and over 3,000 metres of diamond drilling. First Nations engagement and permitting are ongoing.

Roughrider has other mineral prospects in British Columbia, including its 100%-owned Eldorado, Gin and Bonanza properties in the Golden Triangle of northwestern B.C. which are adjacent to the Red Chris Mine. Roughriderâ€™s Scotties West Project, located adjacent to the Scottie Gold Project, in the Golden Triangle, has granted Industria Metals Inc. to earn a 70% interest. The company also has a 100% interest in the Sterling property in Central B.C. Management is also reviewing strategic precious metals opportunities in Western North America.

Roughrider Exploration has 40.9 million shares issued and outstanding. Adam Travis is CEO; his management team has many years of technical, corporate, marketing and financial experience.