Canadaâ€™s westernmost Province of British Columbia was built on gold when back in the spring of 1858 thousands of prospectors landed in the Colony of Victoria on the southern tip of Vancouver Island. Using any kind of boat â€“ seaworthy or not â€“ they crossed Georgia Strait â€“ now the Salish Sea â€“ and joined the Fraser River Gold Rush on the Mainland. The mighty Fraser is the longest river withinÂ British Columbia, rising atÂ Fraser PassÂ in theÂ Rocky MountainsÂ and flowing for 1,375 kilometres (854Â mi), into theÂ Salish Sea at the city ofÂ Vancouver.

Not only did the placer miners find gold in the lower reaches of the Fraser River, they kept finding more as they headed north upstream. This led to the Barkerville Gold Rush in the Cariboo region â€“ an area still active for both placer and hardrock mining and exploration.

Of course, in the early 1860s, infrastructure was nonexistent. Food and supplies were carried to the Cariboo on miners’ backs or by packtrains. The completion of theÂ Cariboo Wagon RoadÂ to Barkerville in 1865 was a great boon to further development.

As prospectors fanned out over the new province, southeastern BC developed as a copper and silver-lead-zinc producing region where new explorers are seeing good results exploring old mine sites at todayâ€™s much higher metals prices.

Major copper mines developed such as Teckâ€™s Highland Valley, Copper Mountain and Tasekoâ€™s Gibraltar Mine with some hosting gold values as well such as the Imperial Metals Red Chris Mine. There are other major projects waiting to be developed such as Yellowhead copper and the polymetallic Windy Craggy deposit. Others are under development, including Serengetiâ€™s Kwanika copper deposit and Consolidated Woodjamâ€™s copper project in the northern Quesnel Trough, which hosts numerous porphyry copper-gold deposits.

Seeing a comeback in recent years, in far northwestern BC in what is known as the Golden Triangle, this region has become a very attractive place to explore with numerous companies actively seeking gold, silver, copper and nickel.

Companies are now exploring BC from the U.S. border in the south to Atlin near the Yukon border in the north and everything in between.

If one goes to the BC governmentâ€™s Mapplace website, it is an amazing site to see virtually every known mineral occurrence in the province staked for a wide variety of minerals and metals. This includes industrial metals, including tantalum, niobium, rare earths, cobalt, graphite, limestone and zeolite.

It is clear that explorers have faith that BC is still a prospective jurisdiction and investors may want to keep an eye on their efforts. 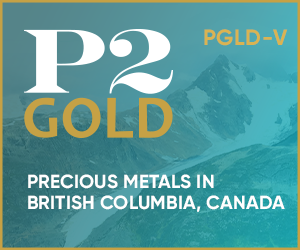 The management team at P2 Gold has extensive experience with the Golden Triangle.Â  They discovered the high-grade gold Brucejack Mine in in the heart of the Golden Triangle and advanced it from a grassroots exploration discovery through feasibility, permitting, financing, construction and into production, while establishing Pretium Resources Inc. [PVG-TSX, NYSE] as a highly profitable intermediate gold producer.Â  Prior to Pretium Resources, the management team were key members of the executive team that transitioned Silver Standard (now known as SSR Mining) from a junior explorer to a silver producer with a portfolio of silver and gold projects in seven countries.Â  P2 Gold plans to capitalize on its managementâ€™s experience and relationships to create value by advancing discoveries and acquisitions in the Pacific Northwest to production. 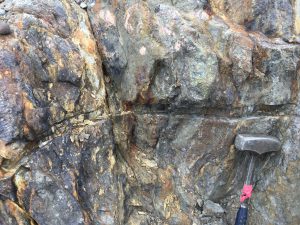 In late November 2020, the company announced results from a three-hole, 1,027-metre drill program at the Todd Creek property, which covers 32,000 hectares and is located roughly 35 km northeast of Stewart, BC.Â  The western side of the Todd Creek Property covers a 12-km by 3-km corridor of altered lower Jurassic volcanic rocks which host at least five zones of gold-copper mineralization including the Yellow Bowl and VMS zones, the targets of the 2020 exploration drill program, and the historical Fall Creek, Ice Creek and South zones. The known zones of mineralization at the Todd Creek property, which borders the east side of Pretium Resources Inc.â€™s Bowser claims, are found in the same stratigraphy that hosts the nearby Brucejack, Snowfield and Goldstorm deposits.

Highlights from the Todd Creek drill program included 4.19% copper, 0.19 g/t gold and 4.90 g/t silver over 1.8 metres within a 3.3-metre interval grading 3.03% copper, 0.20 g/t gold and 7.15 g/t silver.Â  The company noted that prospecting has shown that both the Yellow Bowl and VMS Zones are covered by a mafic unit consisting of basalt flows and volcaniclastics which overlie interbedded rhyolite and andesitic volcanics.Â  The zones are marked by intense QSP alteration surrounded by chlorite alteration, believed to be related to a porphyry system at depth. 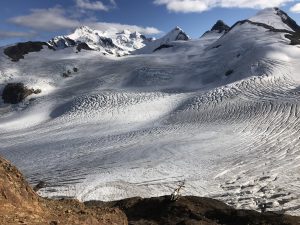 The company said drilling demonstrated that the Main Zone and Northwest Zone structures are well defined with mineralization typical of silver deposits within the silver belt that runs from Idaho through British Columbia into the Yukon.

In October 2020, P2 reported results from the soil geochemical program at the BAM property where mineralization was discovered in the 1960s when exploration in the region was focused on copper, resulting in the discovery of the Galore Creek and Schaft Creek deposits.

To support exploration programs on those properties, the company raised $3.5 million in late July, 2020 from a private placement of 4.6 million non-flow-through units priced at 50 cents each and 2.0 million flow-through common shares at 60 cents per share.

On November 18, 2020, the company said it had also raised $1.42 million from a non-brokered private placement of 3.56 million company units priced at 40 cents per unit. 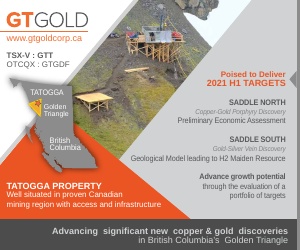 GT Gold Corp. [GTT-TSXV, GTGDF-OTC] is a company with a lot going for it as it works to advance significant new gold-copper discoveries in British Columbiaâ€™s fabled Golden Triangle region.

Aside from a highly experienced management team led by President and CEO Paul Harbidge, GT Gold also benefits from the backing of Newmont Corp. [NGT-TSX; NEM-NYSE], the worldâ€™s leading gold producer, which holds a 14.9% stake in the exploration junior. And in a bull market for both gold and copper that looks to have a long way to run, GT Gold appears to be in the right place at the right time.

The companyâ€™s flagship Tatogga property is located in the Golden Triangle of British Columbia, a region that is home to some of the worldâ€™s largest and richest mineral deposits, including Eskay Creek (gold), KSM (copper-gold-porphyry) and Brucejack (gold). Eskay Creek became the worldâ€™s highest-grade gold producer when it entered into production in 1994.

The Tatogga property covers 47,500 hectares and is situated within 20 kilometres northwest of the Red Chris copper-gold mine, near the community of Iskut, and just off the paved Stewart-Cassier Highway 37. So far, GT Gold has made two significant discoveries on the property, including a precious metals-rich vein system at Saddle South and a gold-rich copper porphyry at Saddle North.

Investors who bought in at this time last year, when the stock was trading at just over 90 cents, have been rewarded with a year-over-year increase of over 85%, with GT Gold hovering above $1.75 now and outperforming the GDXJ Van Eck Junior Gold Index by near 50% over the same time period. The 52-week range for GT Gold is between $2.15 and 84 cents.

At Saddle South, the company has initiated a comprehensive re-log of all drill core as work begins to prepare a geological model in the first half of 2021, with a maiden resource estimate and economic evaluation to follow.Â  The re-log is similar to the one undertaken earlier this year at Saddle North.

Meanwhile, a third target of merit on the Tatogga property known as Quash Pass, is located within 8 kilometres southwest of the Saddle North and South discoveries. In an October 20, 2020 update, GT Gold confirmed the completion of an exploration drilling program at Quash Pass, consisting of nine diamond boreholes over 4,841 metres. The aim was to probe selected greenfield targets across two large-scale anomalous and soil geochemical trends, each spanning a strike length of at least 6 kilometres. Results are expected to be released as soon as they are received, compiled and interpreted.

GT Gold recently closed a $5.7 million fully-subscribed private placement with existing shareholders, that will be used primarily to fund its 2021 exploration program at Tatogga. With 130.0 million shares now outstanding, that leaves GT Gold with market cap of roughly $230 million. With gold and copper prices forecasted to continue climbing, the upcoming catalysts of the Saddle North PEA, Saddle South modeling and new greenfield exploration results position GT Gold very well for growth ahead in 2021. 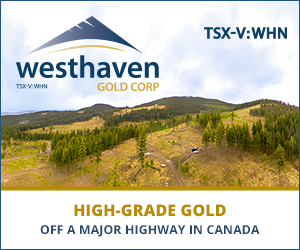 Funding is in place to complete the 40,000-metre drilling program this year.

Gareth Thomas, President and CEO, stated: â€œThe goal for the 2020 drill program was to find new gold vein zones outside of the high-grade South Zone discovery. Our team discovered a brand-new quartz outcrop (Franz Zone) of white to gray, opaque, colloform-banded chalcedony veins hosted in rhyolite, one kilometre northwest of the FMN target. If the Franz Zone is in fact the extension of Vein Zone 1, we will have extended the strike length of Vein Zone 1 to 3.7 kilometres.â€

The newly discovered Franz Zone is located approximately 2.8 kilometres along strike from the high-grade gold discovery at the South Zone. Both the Franz Zone and South Zone are on the Shovelnose property. Over half of this strike length has not been drill tested.

Peter Fischl, Exploration Manager, commented: â€œDrilling through the mid-summer has extended the strike length of the three vein zones originally defined in drilling at South Zone and previously intersected in historic drilling to the northwest at the MIK and Tower showings. Vein Zone 3 has now been traced in recent drilling over a strike length of 650 metres. It remains open to the northwest.â€ 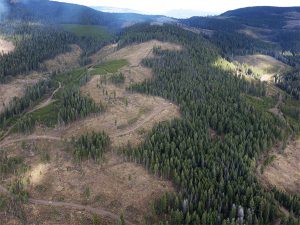 The Shovelnose property is situated off a major highway, near electric power, rail, large producing mines, and within commuting distance from the city of Merritt, which translates into low cost exploration. Forestry roads along the SBGB allow year-round access. The Shovelnose Project is 2.5-hour drive from Vancouver.

As it stands, the four properties on the large land package offer numerous high-potential targets for future exploration. For example, drill results on the Skoonka property have returned 20.20 g/t gold over 12.80 metres and 26.80 g/t gold over 3.31 metres. The 2021 drill program will follow up more Skoonka targets as well as other prospective targets along the belt.

Westhaven Gold has 102,472,409 shares outstanding with insiders holding 30%, institutions and fund with 17% and retail investors with 43%.