Many Canadians not engaged in mineral exploration have not even heard of the Toodoggone region of north-central British Columbia; however, it is expected to gain more attention as exploration and mining activity pick up. The emerging Toodoggone District is situated along the eastern Cordilleran gold belt, composed of the Sheep Creek, Cariboo, and Cassiar orogenic gold districts.

The unusual name is an English adaptation of the older, more aboriginal name Thudegane, which is an adaptation of theÂ Sekani languageÂ termÂ Tuhda Ughane, meaning “Two Brothers River” or “eagles nest”. While placer gold was discovered in the Toodoggone River area in 1925, exploration in the early days had to be accomplished on horseback. Helicopters changed everything.

The region is a remote area between Smithers, Dease Lake and Fort Saint James, approximately 300 kilometres north of Smithers and 200 kilometres east of the community of Iskut.

According to Geoscience BC, both porphyry copper and epithermal silver and gold deposit types found in the Toodoggone mineral district are possibly part of a larger, continuous mineral system.

This, of course, suggests that there are significant precious and base metal mineral deposits yet to be discovered, especially considering that the district has large and, yes, awesome splashes of orange and yellow ground visible from the air, indicating metal-rich gossans. Indeed, the Toodoggone River map area shows 236 documented mineral occurrences.

The Toodoggone mineral district represents the eastern extent of the Stikine Terrane and is separated from the prolific Golden Triangle by younger sedimentary rock of Bowser and Sustut Basins. Centerra Gold’s Kemess East (KE) and Underground (KUG) projects are in advanced stages of exploration and development, respectively, and the nearby Kemess South open pit mine was in production from 1988 to 2011. The KUG deposit is a copper-gold-silver porphyry deposit and the KE deposit is a copper-gold-silver-molybdenum porphyry deposit.

Other explorers and developers include Benchmark Metals which is focused on proving and developing the substantial resource potential of the Lawyer’s Gold and Silver Project. TDG Gold is advancing the past-producing Shasta, Baker and Met mines and exploring the Bot prospect and, in an earn-in agreement with ArcWest Exploration, exploring the Oxide Peak property.

Finlay Minerals has made numerous discoveries of porphyry copper and epithermal gold-silver type occurrences at its PIL property.

A November 2019 collaborative research report published by Geoscience BC outlines a new understanding of mineral deposit types in the Toodoggone region.

MDRU Research Associate and project lead Farhad Bouzari said: “The new framework created from this study indicates that the range of mineralization types in the Toodoggone mineral district shows potential for deeper porphyry deposits to occur beneath the shallow epithermal deposits.”
Geoscience BC Vice President, Minerals, Christa Pellett said: “The results of this study will focus mineral exploration in an area where the field season is short. We expect this to increase mineral exploration throughout the Toodoggone mineral district.”

The Toodoggone region is not as remote as first appears as forestry and company roads access several projects. This mining-friendly and secure region is extremely attractive with both known and yet-to-be-discovered precious and base metal deposits. 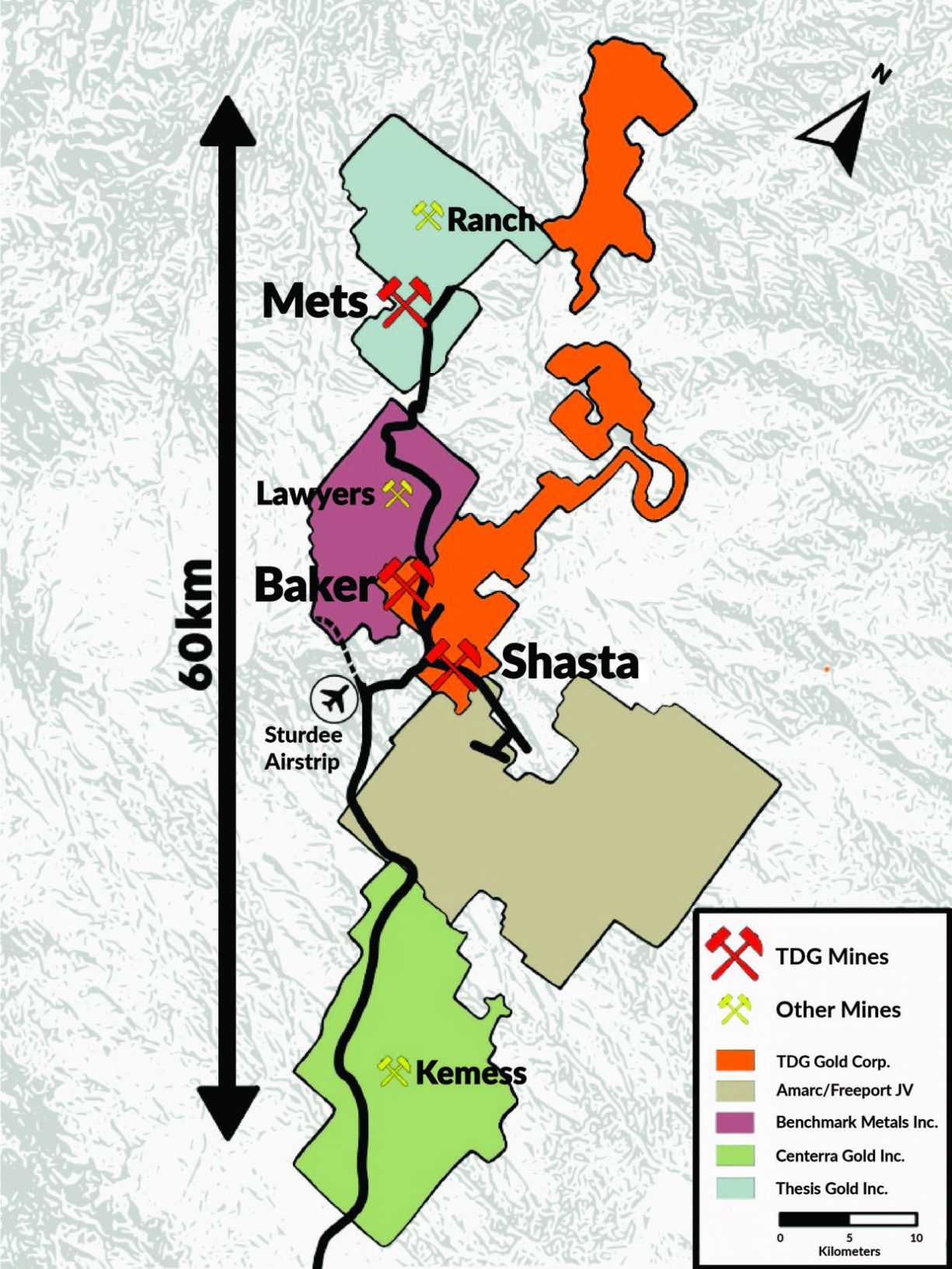 TDG Gold: Gateway to the Toodoggone

TDG Gold Corp. [TDG-TSXV], formerly Kismet Resources, is focusing on the Toodoggone region of northern British Columbia where it has over 23,000 hectares owned outright or 100% optioned that are designated as either brownfield or greenfield.

Access to the project is not a problem as the company’s flagship projects – the high-grade gold-silver Baker and Shasta mines – are both road-accessible on well-maintained forestry and company roads with simple topography comprised of undulating hills.Â  The Baker camp and permitted mine area includes worker accommodation, an expandable 200 tpd mill, equipment and tailing storage facilities. Other infrastructure includes the Sturdee Airstrip 15 km south and BC Hydro power 35 km southeast at the Kemess Mine.

The past-producing (intermittent 1989-2012) Shasta Mine (19,381 oz gold/1,061,577 oz silver) was a small scale, high-grade underground and open pit mine that hosts silver and gold mineralization in multi-phase quartz carbonate stockworks, veins and breccia. TDG Gold has reported results from >28,000 metres of historical diamond drilling at Shasta. With over 50% of drill core returning over 0.25 g/t gold equivalent (AuEq), the project demonstrates bulk tonnage potential.

Based on historical data, TDG has prepared an exploration target of 900,000 to 1.47 million ounces AuEq hosted with 18.7 – 50.7 million tonnes. To test this target, the company has planned +6,000 metres of drilling beginning in summer 2021 and plans to publish an inaugural resource estimate in H1 2022. If the planned drill campaign proves successful, the company may expand the 2021 drill program to bring increasingly more confidence to the maiden resource estimate and an accelerated timeline for a Preliminary Economic Assessment, as early as H2 2022

For 2021, TDG Gold has planned an exploration program in the Baker Mine area to test a new geological model that includes a potential copper-gold porphyry deposit.

The Baker Mine is situated in a valley which encompasses the A, B, C and D veins, Knob Hill and North Quartz target, which are thought to be part of the same system. These are, in turn, surrounded by satellite zones which have seen varying levels of exploration: West Chapelle, Black Gossan, Perry Mason, North Chapelle and Drybrough. All zones are road-accessible except Drybrough.

Of the five satellite zones at Baker, only the Black Gossan, West Chappelle and C vein saw historical drill programs. Satellite imagery and structural geology studies have led to the generation of two new target zones for exploration. The first is the North Chappelle target located 2.5 km northwest from the Baker mill site. The second target, Drybrough, is located on TDG’s Oxide Peak earn-in project 3 km north-northeast of the Baker mill.

At the past-producing Mets Mine, historical exploration included >7,900 metres of drilling. TDG Gold aims to reconfirm the small. High-grade tonnage potential suggested from historical information.Â  The company is investigating the potential to blend high-grade Mets ore with lower grade ore from a bulk tonnage operation at Shasta.

In total, there has been over 58,000 metres of historical drilling at the Toodoggone project site with only about 15% of drill core assayed.

Headed by Dr. Fletcher Morgan, CEO, the management and exploration team at TDG Gold is exceptionally well educated and includes three PhD’s with many years’ experience. The company’s Executive Chairman, Andrew French, a professional geologist and buy-side analyst for the large Swiss gold fund, Gold 2000 (Konwave AG), wrote his Masters thesis on the Toodoggone decades ago, so to say the company has expertise in this area would be an understatement.

The company’s projects are located in the traditional territories of the Kwadacha, Tsay Keh Dene, Takla and Tahltan First Nations. The company takes relations with First Nations seriously and is committed to engaging in early, active and respectful dialogue with their representatives.

TDG Gold is in a fortunate position with road-accessible, permitted, past-producing, under-developed mines, new exploration targets and an operating mill. The possibility of a copper-gold deposit could greatly enhance the economics of the project.

As of March 31, the company had approximately $6.5 million in its treasury with this year’s exploration budget totaling $3.5 million. TDG Gold has 64,423,459 shares outstanding. 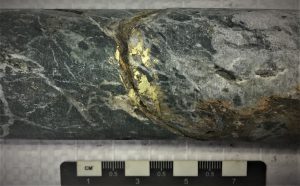 QuestEx Gold & Copper Ltd. [QEX-TSXV; CLASF-OTC] is a junior exploration company with a large portfolio of projects located in two of the hottest exploration areas of northern British Columbia, the Golden Triangle and Toodoggone regions.

Another of QuestEx’s key asset is the KSP property, which includes the Inel gold showing, considered one of the most advanced projects in all of the Golden Triangle that does not already have a resource. It hosts 1.25 kilometres of underground workings and has been the target of 40,000 metres of historical drilling. QuestEx intends to publish a maiden resource for Inel in Q4 2021. KSP is located in a district that already has large, very rich (existing and former) gold mines, including Brucejack, Eskay Creek and Snip.

QuestEx recently raised $11.1 million from a private placement financing that has put the company in a strong position to drill key targets on its KSP property in the Golden Triangle region and on the Sofia property in the Toodogone area. 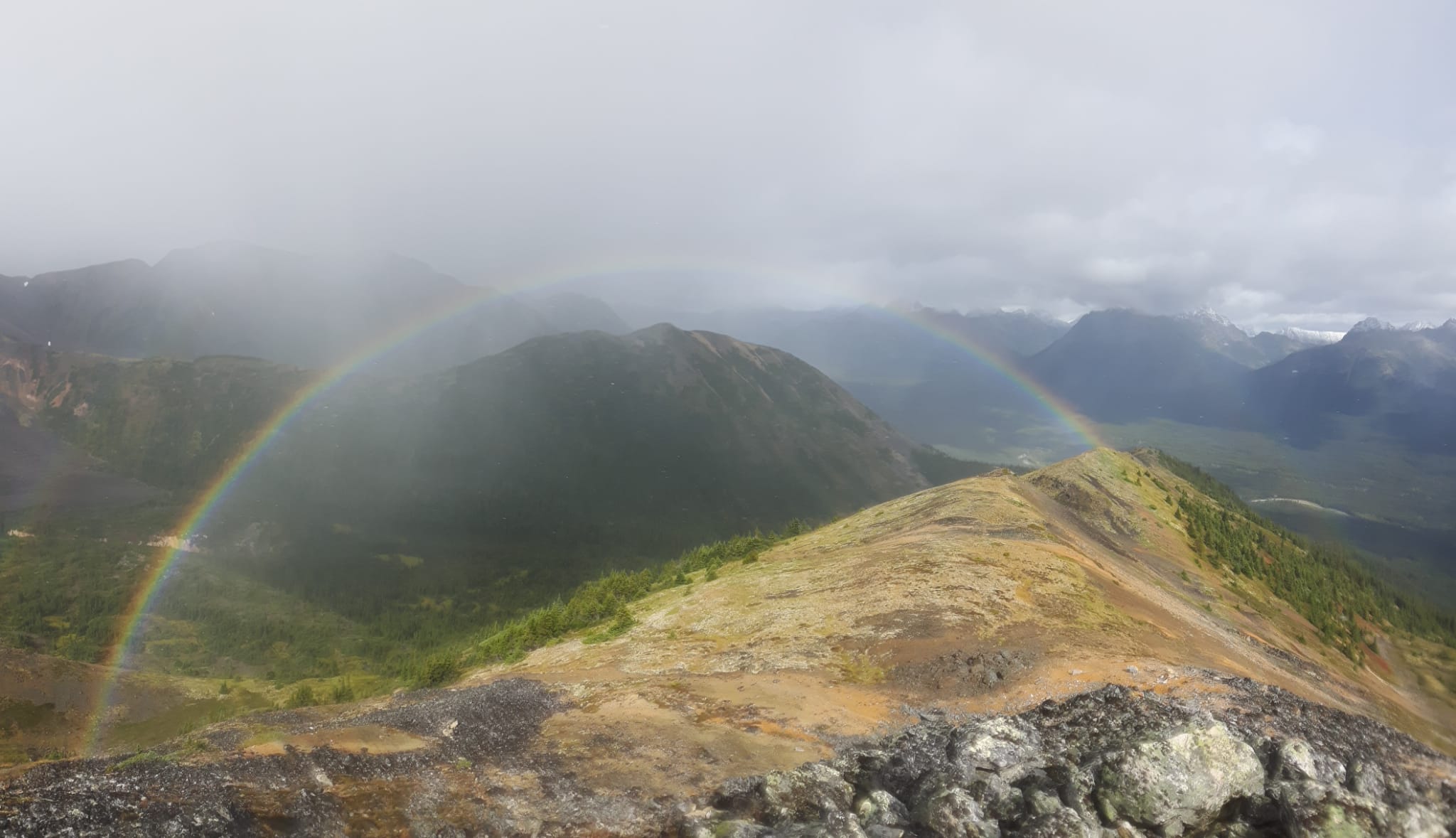 Skeena Resources Ltd. [SKE-TSXV], which has properties (Eskay Creek and Snip) on either side of KSP acquired 5.47 million common shares in the offering, representing a 14.1% stake in QuestEx on a non-diluted basis and retains the option to increase its interest in QuestEx to 19.9%

Newmont Corp. [NGT-TSX; NEM-NYSE], the world’s largest gold miner, which recently completed the purchase of GT Gold in a $456 million deal, acquired 2.42 million QuestEx common shares in the recent offering maintaining its 16% equity interest in QuestEx on a non-diluted basis.

QuestEx President Tony Barresi recently said one of his key goals this year is to expose shareholders to real discovery potential at the Sofia property in north-central B.C.’s Toodoggone district.

“The real model for success in the Toodoggone district right now is drilling low sulphidation gold silver veins. This is what Benchmark Metals is doing at their Lawyers project,” Barresi said in a recent interview

“We have a very unexplored low sulphidation vein system on our property. It has been explored by drilling over a 225-metre strike length, but the system extends for 4.8 kilometres,” Barresi said.

QuestEx has identified three high priority, drill ready targets at Sofia that will be the focus of the 2021 exploration program, that is expected to consist of roughly 3,100 metres of drilling, including:

The Sickle-Griz Quartz Lake-Kevin gold-silver vein system. The target consists of epithermal, gold-silver rich quartz-carbonate veins that extend intermittently over 4.7-kilometre strike length. Individual veins are up to 20 metres thick and have been traced for 350 metres along strike.

The third is the newly identified Cu-Te Structural Corridor and Tranquilo Target, which is located mid-slope between the high elevation lithocap and epithermal mineralization and porphyry copper-gold mineralization in the Toodoggone River valley below.

Meanwhile, the company is also planning a 4,200 metre-drill program on the KSP property in a bid to outline a maiden resource estimate on the Inel prospect.

KSP covers 31,175 hectares 61 claims and is located 15 kilometres east of the former Snip mine. QuestEx is targeting high grade gold veins that are similar to the Snip mine and Pretium Resources Inc.’s [PVG-TSX] Valley of the Kings deposit, as well as bulk tonnage copper-gold mineralization similar to Seabridge Gold Inc.’s [SEA-TSX, SA-NYSE] KSM Project.