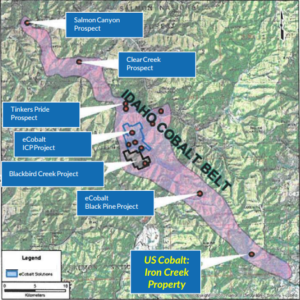 It is no secret that forecasts of explosive growth in lithium-ion battery demand are driving investor interest in cobalt exploration.

In recent weeks, attention has focused on companies like Quantum Cobalt Corp. [QBOT-CSE], which have early stage exploration properties in the historic Cobalt, Ontario region. Shares of Quantum Cobalt have jumped to $1.80 on December 5, 2017, from $1.20 on November 21, 2017, following news that a visiting crew has completed a first pass exploration program at the Kahuna property, comprised of prospecting, mapping and sampling.

Shares of First Cobalt Corp. [FCC-TSXV] – the largest landowner in the Cobalt camp – have also been active following news that the company has completed a merger with CobalTech Mining Inc. and Cobalt One Inc. First Cobalt controls over 10,000 hectares of prospective land and 50 historic mining operations as well as a mill and the only cobalt refinery in North America that is permitted to produce battery metals.

But as shown in a recent report by the investment firm Canaccord Genuity, there is more to cobalt exploration than Ontario. Vancouver-based US Cobalt Inc. [USCO-TSXV], which is exploring in the U.S. state of Idaho, has popped up in a Canaccord “watch list’ after the company raised $6 million from a bought deal private placement of 10.8 million units priced at $0.53 per unit.

It should be noted here that Canaccord was part of an underwriting syndicate that received a cash commission of $345,000. Proceeds of the private placement financing will be used to fund a second phase of drilling at US Cobalt’s flagship Iron Creek Cobalt project. Iron Creek is located in the southeast portion of the Idaho Cobalt Belt. It was discovered in the 1940s and has been explored by a number of companies, including Hanna Mining and more recently Noranda Exploration Inc. Previous operators completed 30,000 feet of diamond drilling and 2,000 feet of underground drifting.

US Cobalt has spent US $4 million on the property, which contains an estimated resource of 1 million tonnes, averaging 0.61% cobalt and 0.30% copper. But due to the age of geological work that was used to arrive at these estimates, they do not comply with NI 43-101 standards of compliance. It means that more drilling work will need to be carried out in order to confirm the validity of these estimates.

Still, US Cobalt exploration vice-president Brian Kirwan said he is pleased with results from the first 13 core holes of a 2017 exploration program that was expected to feature 40 holes in a surface drilling campaign. It was designed to test cobalt and copper mineralization within a west-northwest striking, steeply northerly-dipping cobalt and copper sulfide-bearing zone named the No Name Zone over a strike length of 1,600 feet and a depth extent of 700 to 800 feet from surface. The No Name Zone has only been partially explored by drilling and underground development, but is known to extend to a depth of 3,500 feet (1,066 metres). Highlights from the first 13 holes include 0.51% cobalt over a thickness of 32 feet, including a 12-foot thick zone grading 0.73% cobalt, which includes a 4.5 foot thick zone grading 1.8% cobalt.

“These are very encouraging cobalt results from one of the few active cobalt drilling programs in the United States,” Kirwin said. The company has also been working to rehabilitate three adits that were excavated on the property to provide underground access.

In its exploration review, Canaccord said investors can look to upcoming catalysts, including more results from surface drilling, an updated resource and confirmation of the historic resource.

Management is hoping to experiment with a pilot scale flotation plant by the summer of 2018. Iron Creek is situated near another cobalt project held by eCobalt Solutions [ECS-TSXV]. eCobalt’s Idaho Cobalt Project is an advanced stage property that “will ethically produce environmentally sound battery grade cobalt salts,’ the company has said. A feasibility study has estimated that an underground mining operation can generate 2.4 million pounds of cobalt, 3.3 million pounds of copper, and 3,000 ounces of gold over a 12.5-year mine life. eCobalt says the operation would be a vertically integrated project designed to produce cobalt chemicals for the rechargeable batteries market, in addition to by-products of copper concentrate, copper sulphate, magnesium sulphate and gold.

Meanwhile, in its report, Canaccord to not provide a rating or target price for US Cobalt, which was trading just below 70 cents at the end of November,  but had slipped to 55 cents as of December 5, 2017.