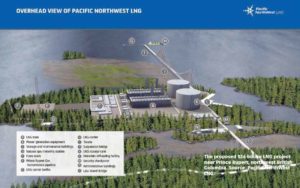 The project, located in northern British Columbia, represents one of Canada’s largest resource development projects with a total capital investment of up to $36Â billion when accounting for upstream natural gas development. During construction, the project will create an estimated 4,500Â jobs and an additional 630Â direct and indirect jobs during the operation of the facility. Local First Nations communities will also benefit significantly through agreements reached with the proponent.

The project is subject to over 190Â legally binding conditions, determined through extensive scientific study, that will lessen the environmental impacts of the project. For example, Pacific NorthWest LNG Ltd. will be required to comply with mitigation measures that will minimize adverse effects on fish, fish habitat, marine mammals, wetlands, migratory birds, and human health. The project is under the auspices of state-owned Malaysian petroleum giant Petronas.

The project will be subject to a rigorous compliance and enforcement regime, which includes establishing environmental monitoring committees comprised of Indigenous peoples, and federal and provincial representatives, for the first time ever. Technical experts will monitor the project and will have the authority to stop project activities that do not comply with the conditions.

In reviewing the project, the Minister of Environment and Climate Change applied the interim principles for environmental assessments announced in January with the Minister of Natural Resources, Jim Carr, designed to restore confidence of Canadians in the process. Examples of how the principles were applied to this project are detailed below.Â  The decision also imposes – for the first time ever – a maximum cap on annual project greenhouse gas

“The Pacific NorthWest LNG Project will deliver thousands of good middle-class jobs and will help pay for schools and roads and social programs that enrich people’s lives. We are moving forward with natural resource development in a sustainable manner, because we have an obligation to leave the planet in better shape than we found it. This is an exciting day for British Columbia, for Canada and for the natural gas industry in this country,” said Jim Carr, Minister of Natural Resources.

“The only way to get resources to market in the twenty-first century is if they can be done in a responsible and sustainable manner. This decision reflects this objective.Â  With the legally binding conditions we are putting in place and with British Columbia’s commitment to increase its price on carbon in line with the Pan Canadian Framework, I am confident that we will minimize the environmental impacts of the project and ensure that it proceeds in the most sustainable manner possible,” said Catherine McKenna, Minister of Environment and Climate Change.