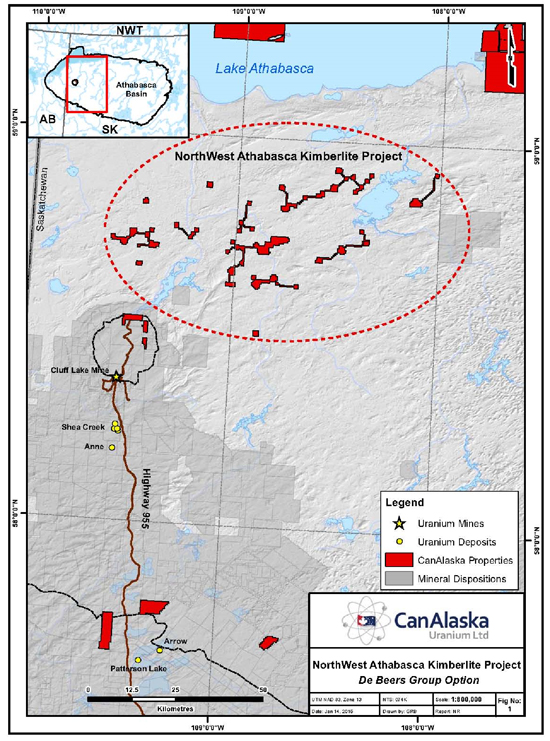 CanAlaska Uranium Ltd. [CVV-(TSXV; CVVUF-OTCQB; DH7N-FSE] has entered into an option-participation Agreement with De Beers Canada Inc. for expenditures up to $20.4 million on kimberlite-style targets staked by CanAlaska in the northwestern Athabasca Basin, northern Saskatchewan.

The claims staked by CanAlaska and optioned to De Beers cover 75 kimberlite-style targets developed from a recent high resolution airborne geophysical survey carried out on behalf of the Saskatchewan Geological Survey. The 2011 airborne magnetic survey, flown at 400-metre line spacing, reveals a series of discrete magnetic anomalies northeast of the Carswell structure and close to the large crustal suture related to the Grease River Fault zone. The Saskatchewan Government’s Kimberlite Indicator Minerals (KIM) sampling programs reached close to the Carswell structure, but the northern most samples are southeast of the down-ice trend from these magnetic anomalies.

There is little exploration work in this area of the Athabasca Basin. In the Fort McMurray area of Alberta, the sampling for KIM shows a grouping of KIM dominated by chromite, with some pyrope and eclogitic garnets. These appear to be down-ice from the kimberlite-style targets identified within the Athabasca Sandstone in the northwestern Athabasca. Basement rocks below the Athabasca Sandstone form part of the Rae Province, with a projected lithospheric thickness in excess of 150 kilometres, thereby within the diamond stability field. The Rae Province, north of the Athabasca in the Nunavut, hosts diamondiferous kimberlites which have been briefly investigated in the past.

The multi-stage CDN $20.4 million option agreement allows De Beers to carry out a series of work programs to earn-in to the project as follows:.

De Beers is required to progress through the options within the time periods or return the property to CanAlaska, however the sequential options are subject to CanAlaska’s right to participate in the exploration as a Joint Venture partner. CanAlaska’s participation rights (to prevent further dilution of its interest) start once De Beers has earned its 70% interest. The work programs will be operated by De Beers, but with assistance from CanAlaska. The priority work will include a detailed airborne survey, diamond indicator sampling in the vicinity of the targets, followed by drill testing prioritized targets.

Peter Dasler, President, CanAlaska, said, “These 75 circular targets fit all the geological and geophysical criteria of kimberlites. The location of the targets within a thick sequence of crustal rocks and their clustering around major structural features, provides a compelling target for CanAlaska and De Beers. We are very pleased to have joined forces with the world’s premier diamond explorer to evaluate this 17,400 hectare (43,000 acre) claim package, which hosts numerous targets. Our alliance with De Beers will allow rapid first pass evaluation, and we look forward to the ability to participate with De Beers as a partner as the project grows.”