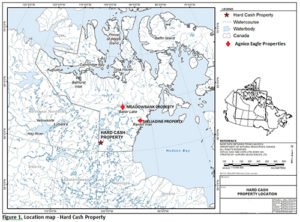 Agnico’s key assets include Meadowbank, which produced 352,526 ounces of gold and 275,000 ounces of silver in 2017; and Meliadine, which is scheduled for startup in the second quarter of 2019, and will be Nunavut’s fourth mine.

At the same time, Agnico is bringing on a satellite deposit at the Meadowbank mine. The company is building a 64-kilometre road connecting Meadowbank with the Amaruq deposit.

All of those projects are 100%-owned by the company.

The Hard Cash and Nigel properties host multiple high-grade surface gold showings over a large area within a favourable setting for orogenic gold discoveries similar to the Meadowbank and Meliadine. “They represent another district scale, high impact exploration opportunity for Canarc in a mining-friendly jurisdiction where a major gold producer already has a strong presence,’’ said Canarc CEO Scott Eldridge.

To earn a 100% interest in these properties, Canarc has the option to make $150,000 in cash payments and issue 1.5 million shares over a 4-year period to Silver Range. Once the option is exercised, Silver Range will retain a 2% net smelter return royalty on the properties, which Canarc can re-purchase for $1 million.

Silver Range will also be entitled to a one-time payment of $1 per ounce of gold (or the equivalent in other metals), identified in a NI 43-101-compliant measured and indicated resource estimate applicable to either of the properties.

In addition, Silver Range will be entitled to a one-time payment of $1 per ounce of gold (or the equivalent in other metals), identified in a NI 43-101-compliant proven or probable reserve estimate applicable to either of the properties.

Canarc has projects with significant existing gold resources located in Nevada, the United States and British Columbia. It has initiated a high impact exploration strategy to acquire and explore new properties that have district-scale gold discovery potential.

Canarc shares were unchanged at 4 cents Thursday. The 52-week range is 10.5 cents and 4 cents.

Silver Range is a project generator working in politically stable jurisdictions that are known to host high grade gold deposits. It currently has projects in Yukon, Northwest Territories and Nunavut as well as a growing portfolio in Nevada. The company recently said it has been awarded prospecting permits covering an Archean conglomerate-hosted (Pilbara style) high grade gold target in Nunavut with historical grab samples that assayed up to 142 g/t gold.  Mineralization at the Tree River property is similar in age, setting and style to mineralization recently discovered by Novo Resources in the Pilbara district of Australia.