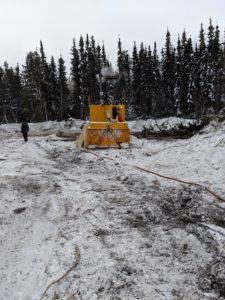 Northern Ontario’s Porcupine Mining Camp would certainly rank among the most resilient in the country. In the early 1960s, the camp’s future was in doubt with major gold producers – including the prolific Hollinger and McIntyre mines – coming to the end of their productive lives. Then, Texas Gulf Sulphur made its huge Kidd Creek base metals discovery which put the region on an even economic keel for the next 50 years.

Kidd Creek is finally coming to the end of its life and the rush is on to find sustainable resources to keep Timmins going for the next 50 years and perhaps into a second century of commercial metal production.

Central Timmins Exploration Corp. [CTEC-TSXV], which counts Goldcorp [G-TSX; GG-NYSE] as one of its shareholders, has a portfolio of mineral properties lying exclusively within the Porcupine Mining District. The properties are prospective for gold as well as base metals and cover highly prospective lithologies and structures.

Despite being located in the near vicinity of one of the most important gold mining camps in Canada, Central Timmins’ holdings are clearly under-explored. Various portions of the project area have been explored sporadically since the early 1910s but exploration was never comprehensive enough to facilitate the discovery of any economically viable mineral deposits.

Work at Faymar led to underground development and limited production from 1935 to 1941. In fact, past production from the Timmins Project is limited to the Faymar Mine which from 1940 to 1942 totaled 21,851 ounces of gold from ore grading 0.18 oz/ton. More recently, most of the claims comprising the project were explored on a more continuous basis from 2006 to 2017 by Claim Post.

Since acquiring the project, Central Timmins has completed the analyses and interpretation of MMI geochemical samples collected in late 2017, carried out a geological compilation of Mountjoy Township, and re-interpreted results of ground geophysics completed historically on a portion of its claims in Deloro Township. Previous work by Claim Post included airborne and ground geophysics, MMI geochemical sampling and diamond drilling to test mineralized zones defined historically and to verify airborne geophysical anomalies.

Based on the re-interpretation of historical exploration, targets have been identified on each of the four main target areas: Four Corners, Mountjoy, Ogden and Deloro. The company grossed approximately $1 million via a non-brokered private placement of flow-through shares in December to finance the work.

In late October, Central Timmins reported that it had engaged a drilling contractor for an initial 5,000-metre diamond drill program scheduled for completion in Q1 2019. Initial drilling will focus on an area where historic drilling completed by Dictore Porcupine Gold Mines in 1939 intersected 45 metres averaging 2.7 g/t gold in three distinct zones in a 220-metre drill hole.

An analysis of the company’s entire 6,000-sample MMI data base has generated 20 targets spread over the four Timmins Project areas.

Central Timmins CEO, Charles Gryba, comments, “I am excited at the prospect of starting our exploration program on our 4 projects within the 77 km2 Timmins property package. Twinning the Dictore DDH #5 hole is very exciting as the historically defined gold mineralization started some 80 metres below surface.”

“The next nine drill targets are a combination of a minimum of three layers of positive exploration data. For example, a MMI geochem anomaly matched to airborne magnetic or E/M anomaly plus E/M, IP or Magnetic ground geophysical data to confirm the drill setup location,” he adds.