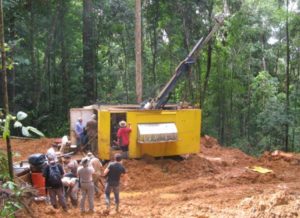 Columbus Gold Corp. [CGT-TSX, CBGDF-OTCQX], the company that recently spun out its Western U.S. exploration assets into Allegiant Gold Ltd. [AUAU-TSXV], has moved to solidify its position as a leading gold exploration and development company in French Guiana.

It has achieved that goal by striking a deal with Iamgold Corp. [TSX-IMG] to acquire up to a 70% interest in the Maripa gold project in eastern French Guiana, 40 kilometres south of the capital city of Cayenne. The project consists of up to five contiguous exploration permits covering approximately 120 square kilometres and is located in an area where gold has been mined for over a century.

News of the Maripa option deal comes eight months after the Allegiant Gold spin-out, which was aimed at unlocking the value of a basket of U.S. exploration assets, mainly located in Nevada, which the company decided were being overshadowed by Columbus Gold’s 45% interest in the Montagne d’Or (Mountain of Gold) project in French Guiana.

In an update released on August 7, 2018, the company said that as part of the permitting process for  Montagne d’Or, it has embarked on a public consultation process that  will lead to the production of a report based on the opinions, commentaries and contributions received from stakeholders during public hearings.

The report is scheduled to be published no later than September 7, 2018.

According to a bankable feasibility study released in March 2017, Montagne d’Or can produce 214,000 ounces of gold annually over a 12-year mine life with total all-in-sustaining costs estimated at US$779 per ounce.

Initial capital costs are estimated by the study to be US$361 million.

The decision to proceed to construction is subject to a number of regulatory requirements, including the three-month consultation process, delivery of an environmental and social impact study and the submission and approval of mine permit applications.

Mine permit applications are expected to be submitted by the fourth quarter of 2018 and approval is expected to take between one year and 18 months, the company said.

So with the permitting process for Montagne d’Or on track, Columbus said it has been turning its attention towards other opportunities in French Guiana that could establish the company as a dominant player in an emerging gold mining district.

“With mine permitting well under way at the Montagne d’Or gold deposit, the timing was right for this deal at Maripa,’’ said Columbus Chairman Robert Giustra.

He said the company said it has signed the agreement with Iamgold in the belief that Maripa has the potential to host a significant gold deposit. It said the project is located in an area that is accessible via national highway RNR, which runs through most of the property.

“Past exploration work conducted at Maripa provides Columbus with an excellent base of geological, geochemical and geophysical data to advance Maripa to the drill definition stage in 2019,’’ the company said in a press release.

That includes 134 shallow core holes totalling 9,000 metres, including 106 that were drilled by Iamgold between 2000 and 2006. Past exploration was successful in delineating several wide zones/shears of gold mineralization on the southern border of a regional deformation zone known as the North Guiana Trough (NTG).

Columbus said the NTG is recognized as a highly favourable geological setting for gold mineralization as it hosts Iamgold’s Rosebel mine in Suriname.

Under the agreement with Iamgold, Columbus can earn the 70% interest in Maripa in two phases:

Initially it can earn a 50% stake by spending US$5 million on exploration within five years. By the fifth anniversary of the agreement, Columbus is expected to deliver an internal scoping study.

Columbus can elect to acquire an additional 20% interest after agreeing to form a 50/50 joint venture with Iamgold and completing a preliminary feasibility study within an additional three years. After the PFS is delivered, the joint venture interests would be changed to 70% Columbus and 30% Iamgold.

Under the agreement, if any party’s interest falls below 10%, it will be converted to a 2% net smelter royalty, of which 1% can be purchased by the other for US$3 million.