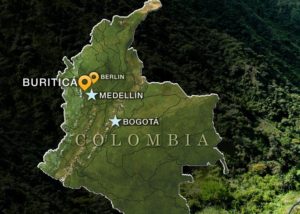 Continental Gold Inc. (TSX: CNL)(OTCQX: CGOOF)(“Continental” or the “Company”) is pleased to announce the first results from its 2017 exploration drilling program at its 100%-owned Buriticá project in Antioquia, Colombia. As a result of the early encouraging results, the Company is increasing its drill program for calendar 2017 from 15,000 to 25,000 metres and will increase from three to eight drill rigs by early November 2017. The focus of the program is to both increase and upgrade mineral resources to higher classification categories by testing for high-grade and broad mineralized zones within both the mineral reserve and mineral resource envelopes as well as high-impact targets along strike of existing mineral resources and grassroots targets proximal to existing and proposed infrastructure.

Highlights (referenced in Figures 2, 3 and 4)

Broad Mineralized Zone (“BMZ”)
The BMZ consists of a group of modelled precious metal-bearing veins in the mineral resource estimate with significant mineralization occurring between these veins, generally in the form of veinlets at oblique angles to strike. The majority of the mineralization between modelled veins is not in the current mineral resource estimate, providing potential upside both in terms of identifying significantly broader and more productive zones for mining and increased mineral resources. To date, the Company has modelled six BMZ targets for testing, each of which has potential to be 500 metres or more in vertical length.

The first BMZ target in the Yaraguá deposit (Figure 1, See target #1), discovered in 2016 through a series of true horizontal width cross-cuts covering 20 vertical metres, has been extended an additional 80 vertical metres (100 metres total) by drilling. The BMZ averages approximately 30 metres true horizontal width and 30 metres lateral strike and remains wide open at depth along strike to both the east and west and down-plunge. A composite weighted average of all drill holes intersecting the BMZ is as follows:

Two drill holes, which extended the vertical dimension of the BMZ to 100 metres by encountering the deepest BMZ mineralization to date at an elevation of 1,465 RL, intersected robust gold grades and widths as follows:

The Company plans to construct a new drilling chamber in the near future at a lower level to target the continuation of this BMZ to deeper elevations upon further advancement of commercial underground development at the Yaraguá deposit.

BUUY333 was drilled outside the BMZ to the east, defining the eastern limit of this zone at an elevation of approximately 1,500 RL. However, the drill hole successfully infilled the Yaraguá vein system, intersecting grades X thickness in line with the mineral resource block model as follows:

Three drill rigs continue to operate with numerous holes completed and awaiting assays. Results are expected to continue to be released in a timely manner.

Ari Sussman, Chief Executive Officer, stated: “The results of BMZ drilling are impressive to say the least and will lead to greater mine plan flexibility once commercial production commences in 2020. The potential is very real for upside growth in total mineral resource ounces and improved project economics. Our geological team’s ability to generate exciting brownfield and grassroots targets from our rich mineral district at Buriticá will continue to be a value-driver for shareholders as blue-sky potential is unlocked. Accelerating the drilling program only makes sense given the upside, the support of Newmont Mining and the strong financial position of the Company.”