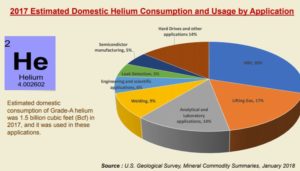 The rare, naturally-occurring, non-flammable, lighter-than-air gas helium (He) doesn’t get a great deal of news coverage compared to other industrial sectors, yet the world’s second lightest gas is certainly important.

This is because of ever-increasing high-tech uses that include the manufacture of high capacity hard drives, barcode readers, computer chips, semiconductors, LCD panels and fiber optic cable; as a refrigerant in cryogenics research; space vehicles; and as a coolant for nuclear reactors and magnets in MRI machines.

With helium supplies projected to be exhausted in 2020 at the U.S. National Helium Reserve in Amarillo, Texas, it is a wonder that helium gas is still sold for frivolous party balloons. Indeed, there is a looming worldwide shortage of helium in this growing $1.5 billion market.

The United States currently supplies approximately 40% of the global marketplace with current prices ranging from $164 – $200 per thousand cu ft. (Mcf) for Grade A (99.995% pure) He.

While helium is sometimes found with natural gas deposits, in the Holbrook Basin of eastern Arizona, helium is associated with nitrogen and carbon dioxide. The Holbrook Basin is not only one of the most prospective location for helium deposits on Earth, it also has the advantage of not being located in dodgy countries such as Qatar, Algeria, Russia and Tanzania where other deposits exist.

Desert Mountain Energy Corp. [DME-TSXV] has been acquiring leases in the prolific Holbrook Basin and recently acquired an additional 3,040 acres under lease for helium, oil and natural gas for its Heliopolis Project. The leases were acquired at auction from the Bureau of Land Management of the U.S. Department of the Interior (BLM). The new leases are situated in Navajo County in relatively close proximity to the prolific Pinta dome field, which with related nearby fields produced in excess of 9.2 billion cubic feet of helium gas grading 8 to 10% He from 1961 to 1976.

This now brings the company’s total acreage under lease in the basin to 39,742 acres when added to the 36,702 acres already under lease from the Arizona Department of Land. The company initiated its exploration and land acquisition program in the basin in the fourth quarter of 2017.

The new leases are highly prospective for helium as well as oil and natural gas. They bring to seven the total number of distinct areas over which leases have now been secured by the company in the Holbrook Basin.

This latest tranche of leases adds acreage to the company’s existing Woodruff east area as well as establishing a new area called Pinta dome north. The leases are characterized by the necessary anticlinal features, monoclines and other geological structures with surface expression, together with reservoir rocks and salt and anhydrite caprocks, giving them potential to serve as trapping mechanisms for commercially significant helium reservoirs.

Approximately 2,400 acres of the new leases, comprising BLM lease parcel ID AZ-2018-09-0386, are in Navajo County in an area called the Woodruff East area, bringing to 8,828 acres the company’s aggregate lease holdings in this area. It is situated in the northeastern corner of the Holbrook basin approximately 12 miles south-southwest of the Pinta dome field.

These new leases directly offset two historic blowout gas wells, NMA No. 10 and NMA No. 37, providing the company with the next permitted well locations under applicable regulations. The reported pressures encountered on each of these two blowout wells is consistent with the pressures initially found on the primary Pinta dome field wells.

Approximately 640 acres of the new leases, comprising BLM lease parcel ID AZ-2018-09-0418, are located in Navajo county on the north side of the Pinta dome field in an area called Pinta dome north. One portion of this lease parcel is located within the same section only 2,500 feet from where the historic Kerr-McGee 1-28 state well was drilled in the southeastern portion of the section.

Production records show that the Kerr-McGee state 1-28 well cumulatively produced 804,961,000 cubic feet of helium over a 15-year period. At the recent BLM auction price of US $279 per 1,000 cubic feet of crude helium, that would equate to a current gross value of approximately US $225-million. The other lease acreage directly offsets the Kerr-McGee No. 4 state well, which cumulatively produced 48,233,000 cubic feet of helium. Records clearly show both the KM No. 4 state and KM state 1-28 wells were part of the 11 wells comprising the original Pinta dome field.

According to Irwin Olian, CEO, “We are very excited to have been able to acquire these new leases in the Holbrook Basin from the BLM, which now brings our aggregate lease holdings in the Holbrook basin to 39,742 acres in seven discrete structural areas throughout the basin. This gives us a lot of drilling options and we are presently at work prioritizing our targets for further exploration and drilling. Our He targets are relatively shallow, permitting us to drill simple vertical wells at low cost with low profile above ground and minimal environmental impact. Consistent with our prior activities in North America and Africa, our team continues to be highly sensitive to environmental and social issues and is designing our work programs to be minimally intrusive.”