Ecuador is expected to increasingly emerge as a â€˜go to’ jurisdiction for mining investment in Latin America due to the significant success companies such as Solaris Resources and other explorers are having in discovering new mineral resources to add to a considerable pipeline of development projects moving toward production amid a business climate improved by the Ecuadorean government to encourage investment in the sector.

According to BNamericas, mining companies operating in Ecuador are expected to invest over US$1 billion in exploration during the 2020-21 period and a number of new mines are expected to enter production.

This growth in the nascent Ecuadorian mining sector was jump-started by Lukas Lundin of Lundin Gold which acquired the Fruta del Norte gold project in 2014. Fruta del Norte is one of the few large-scale, high-grade gold assets in production globally and the company advanced the project in a way that demonstrated to the government and local communities that responsible resource development was achievable.

“Ecuador is one of the only significant jurisdictions globally that has a recent track record of encouraging exploration and mining investment by improving both the fiscal and regulatory framework for the sector,” Earle said.

The Ecuadorian government’s objective is to make the mining sector one of the major drivers of foreign direct investment, government revenues and employment, particularly in remote regions that have historically had less opportunities for employment and economic growth. To that end, Ecuador is developing a 10-year mining plan to provide investors with stability and certainty for future resource development and less dependence on oil revenues.

Yes, the Ecuadorian exploration and mining industry has been affected by the COVID-19 pandemic; however, the commercial mining industry has stepped up to manage the crisis on its projects and in its communities. With only a few mines and exploration projects underway in this small but growing sector, there are tremendous opportunities for new mineral discoveries in mineral-rich but little explored Ecuador and it is comforting to explorers to know that the government and local communities that can benefit from these projects are welcoming them. 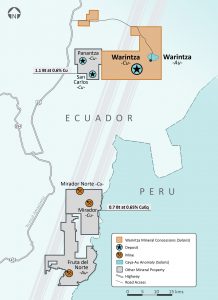 Solaris Resources [SLS-TSXV] is a copper, gold growth and discovery story with a portfolio of six assets in the Americas assembled by the legendary geologist, David Lowell.

The company was spun out of Equinox Gold in 2018 and partnered with the Augusta Group to surface the value of its exploration assets. Augusta Group, founded by mining magnate, Richard Warke, has an unrivaled track record in value creation within the exploration sector achieving over $4.5 billion in exit transactions in the last decade. Equinox Gold continues to be a major supportive shareholder, alongside Lukas Lundin (~6%) and Ross Beaty (~5%), who are among the most successful financiers in the sector.

The company’s flagship asset, Warintza, located in southeastern Ecuador, was discovered by the late David Lowell in 2000. A small, shallow drilling campaign around the discovery outcrop ensued totaling less than 7,000m, with the holes averaging less than 200m in depth. This was the basis for an in-pit inferred resource estimate for Warintza Central totalling 124Mt @ 0.70% CuEq (0.56% Cu, 0.03% Mo and 0.1 g/t Au). The resource was left open laterally and at depth and was set within a 5km x 5km cluster of copper porphyries with no drilling outside of the Warintza Central discovery. 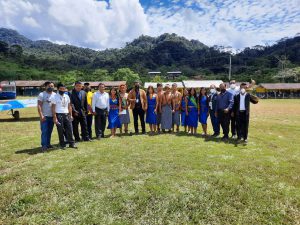 The project sat largely dormant since 2001 due to a breakdown in social support for the project over a dispute relating to surface rights. At the time, Ecuador was very much a frontier jurisdiction with no commercial mining industry. The overall climate for mining in the country began to change in 2014 when the government shifted policy to encourage mineral development in an effort to diversify its economy from over-reliance on the oil sector by eliminating punitive windfall taxes, reducing royalties, introducing value-added tax rebates and making a host of corresponding regulatory changes to allow projects to move forward.

Lundin Gold did just that in acquiring the Fruta del Norte project, 45 km to the south of Warintza, and developing it in a socially and environmentally responsible manner. This improved sentiment toward mining development in the region and created conditions for Solaris to successfully restart a dialogue with the communities surrounding its Warintza Project in 2018. 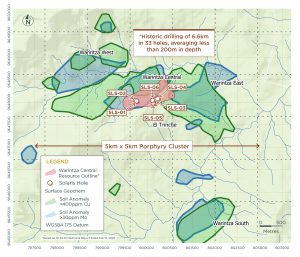 Despite no current formal process set out in law, Solaris completed the first government-sponsored pilot-project consultation process in Ecuador consistent with the UN Declaration on the Rights of Indigenous Peoples principle of free, prior and informed consent for the project. The consent of the Traditional Owners, the Warints and Yawi Shuar nations, was formally agreed to in a Memorandum of Understanding with Solaris in mid-2019 and, subsequently, an Impact and Benefits Agreement (IBA) in September 2020, providing certainty of community support for the responsible advancement of the project from exploration and development through production. The IBA represents industry best practice and another new first for Ecuador. The Warints and Yawi Shuar nations are duly recognized by the Ecuadorian State as the legal parties to authorize and sign agreements, treaties, and other instruments on these Ancestral Lands. 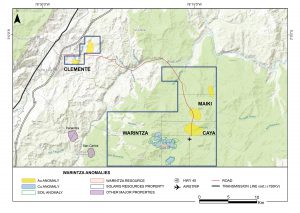 With the full support of local communities, Solaris was able to restart exploration activities at Warintza earlier this year and is embarking on a 40,000-metre drill program designed to pick up where David Lowell left off. This is the first drill program completed in over 20 years with recent drilling significantly extending mineralization beyond the 200m average depth-extent of historical drilling that the Warintza Central resource estimate is based upon. Mineralization is open laterally in every direction and to depth. The first six holes have been released returning long intervals of high-grade mineralization from surface including 1,004 metres grading 0.71% copper equivalent (CuEq) (0.59% Cu, 0.03% Mo, and 0.05 g/t Au) with holes bottoming in mineralization and at the depth-capacity of the drill rig. Zero drilling has been completed outside of Warintza Central with other targets of equal footprint at Warintza West, Warintza East, and Warintza South. In addition, Warintza hosts a series of three multi-km gold-in-soil anomalies generated from soil sampling programs within the 5km Warintza trend which have never been drilled. 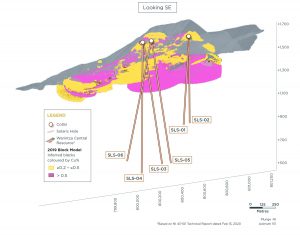 The 26,777-hectare Warintza property has access to excellent infrastructure including abundant hydroelectric power, fresh water, and road access connecting to a main highway. With recent drilling demonstrating robust grades at least 1,000 metres deep and still open, the Warintza Project is clearly an outstanding porphyry project on its way to economic status.