Eloro Resources Ltd. (TSX-V: ELO; OTCQX: ELRRF; FSE: P2QM) (“Eloro”, or the “Company”) is pleased to announce assay results from two (2) additional diamond drill holes from its on-going drilling program at the Iska Iska silver-tin polymetallic project in the Potosi Department, southern Bolivia. One drill hole, DSB-36, collared 400m southeast of the Santa Barbara adit, tested the extension of the core of the high-grade feeder zone at Santa Barbara while hole DSB-34, tested the potential southwest limits of the high-grade feeder zone as shown in Figure 1.

Tom Larsen, CEO of Eloro, said: “Results from hole DSB-36 continue to confirm that the high-grade feeder zone extends much further south-southeast across the valley of the Iska Iska caldera as interpreted from our geophysical surveys. This new hole has extended the strike length a further 400m to the south-southeast where it remains open along strike. We are continuing to aggressively drill this important target which has the potential to outline a significant open pittable resource.”

Dr. Bill Pearson, P.Geo. Eloro’s Executive Vice President, Exploration commented: “We are continuing to carry out our 100m-spaced sectional drilling across the Iska Iska caldera valley. As shown in Figure 2, we have four holes in progress with four additional holes planned that collectively total 6,000m to complete our first-pass definition drill program. We expect that this drilling will be completed by the mid- to latter part of November. Currently, assays are outstanding for approximately 14,213m of drill core as shown in Table 2. Turnaround from our assay laboratories has however improved in recent weeks so we expect most of this backlog to be cleared up by the end of November. We are working closely with Micon International to build a robust model for the mineral resource estimation. GeologicAI is also completing development of comprehensive mineral maps calibrated by our new mineralogical data which will greatly aid the modelling process.”

Hole DSB-36 was drilled to test the potential south-southeastern extension of the Santa Barbara High Grade Feeder Zone shown in Figure 1. This hole was collared approximately 400m south-southeast of the underground drill bay in the Santa Barbara adit and was drilled at an azimuth of 225degree with a dip of -60degree. This hole intersected many significant intersections including:

Hole DSB-34 was drilled at an azimuth of 225degree with a dip of -60degree and was collared approximately 200m due south of the Santa Barbara adit to test the potential southwest limit of the high-grade feeder zone (Figure 1). This hole intersected several wide lower grade intersections in the upper part of the hole which are notable for their silver content in the absence of appreciable base metals. In the lower part of the hole, base metals are again present including tin and copper. Significant results are as follows: 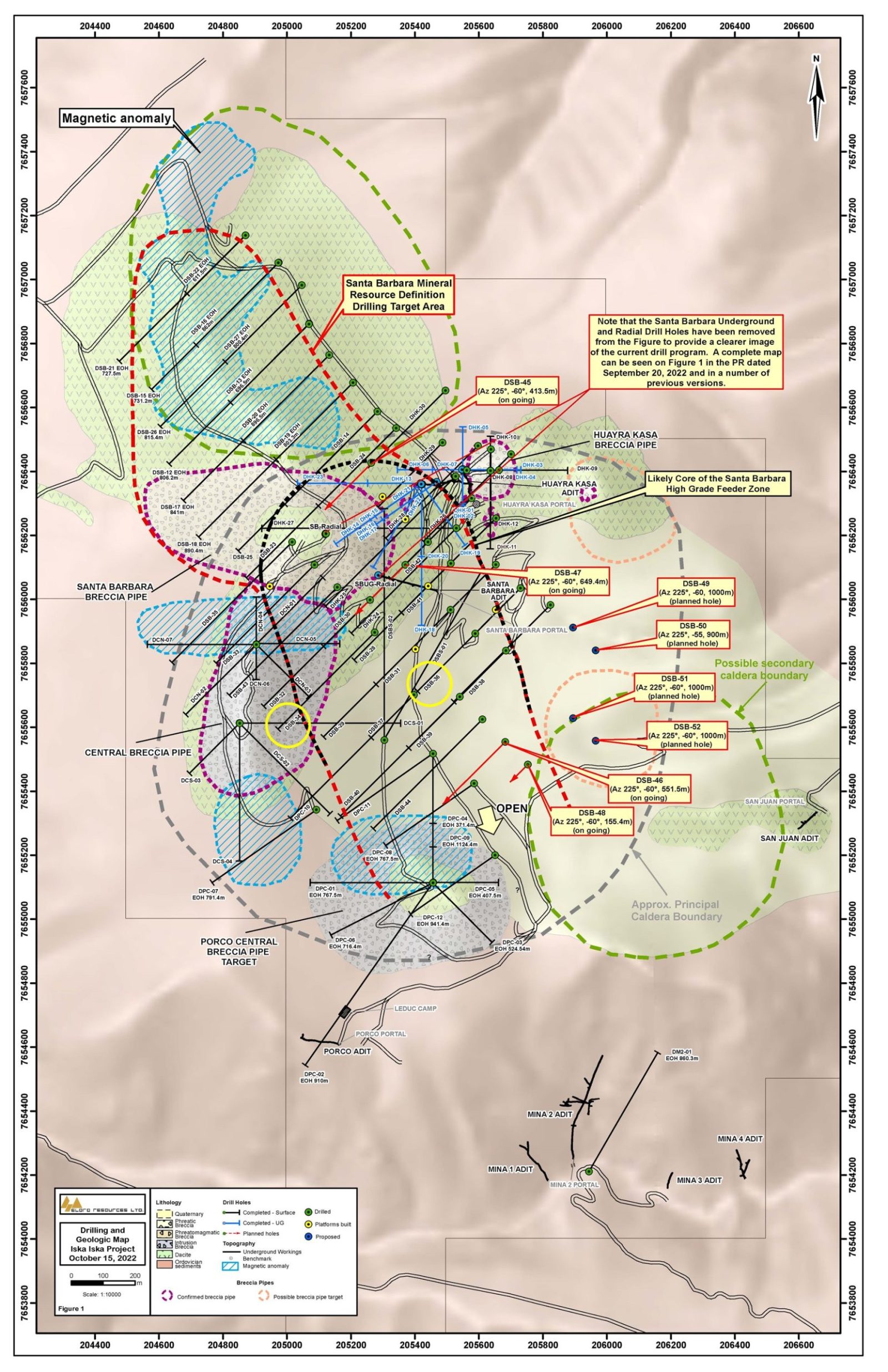 Figure 2 – Plan map showing Completed and Planned Drill Holes to test the South-southeastern Extension of the High-Grade Feeder Zone at Santa Barbara. The surface projection of the High Conductivity Zone (from 200m below surface) and the 3D Magnetic Susceptibility Anomaly (from 500m below surface) are also shown for reference. For further discussion on our geophysical surveys, please refer to our press release of September 20, 2022. 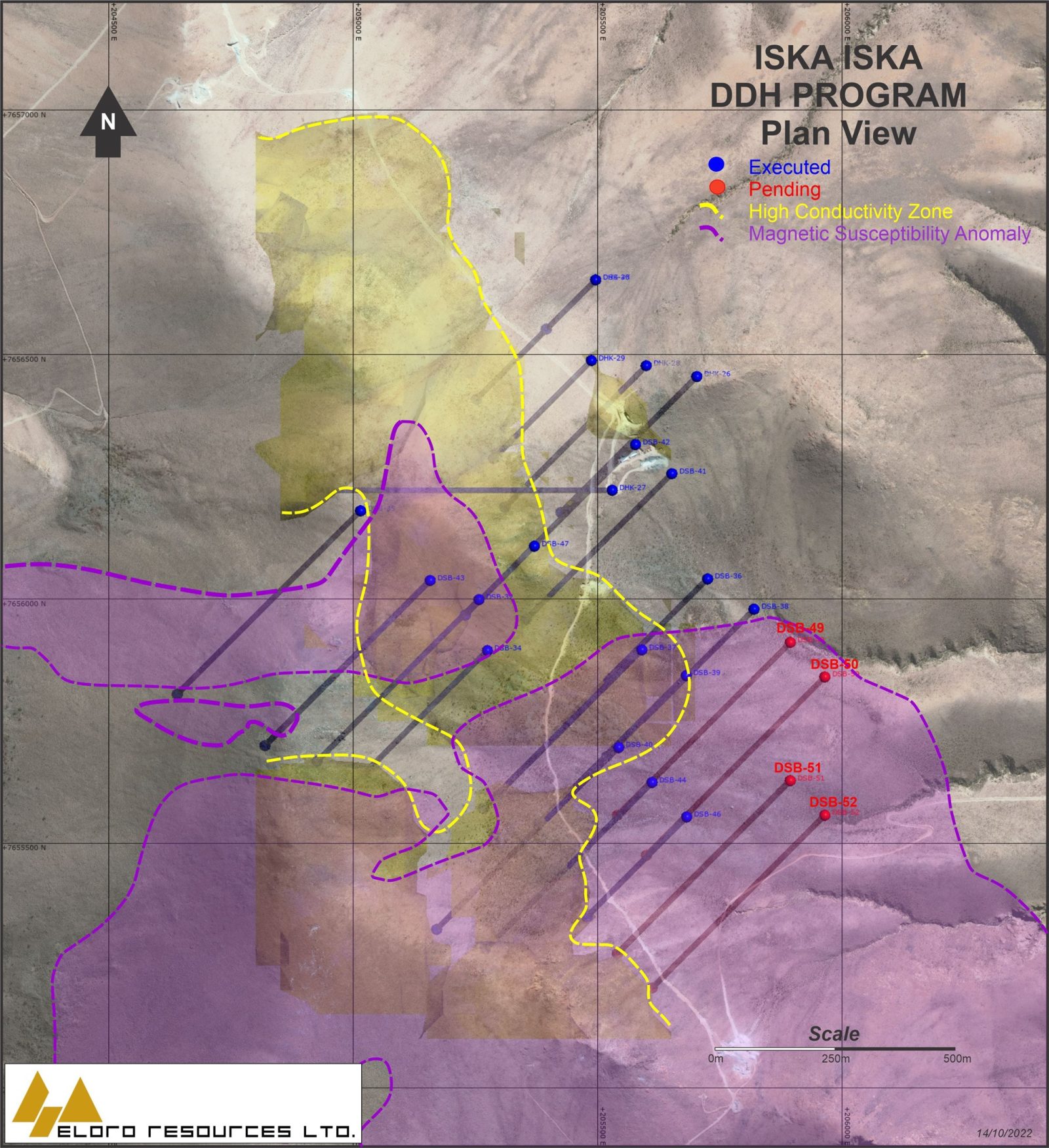 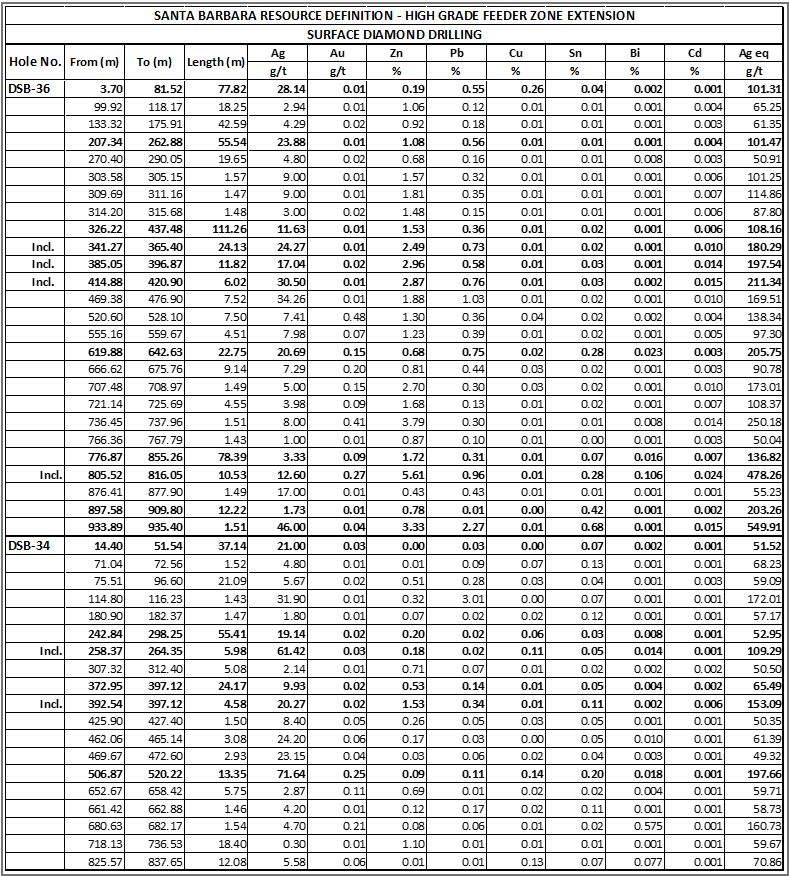 Note: True width of the mineralization is not known at the present time, but based on the current understanding of the relationship between drill orientation/inclination and the mineralization within the breccia pipes and the host rocks such as sandstones and dacites, it is estimated that true width ranges between 70% and 90% of the down hole interval length but this will be confirmed by further drilling and geological modelling.

In calculating the intersections reported in this press release a sample cutoff of 30 g Ag eq/t was used with generally a maximum dilution of 3 continuous samples below cutoff included within a mineralized section unless more dilution is justified geologically.

The equivalent grade calculations are based on the stated metal prices and are provided for comparative purposes only, due to the polymetallic nature of the deposit. Metallurgical tests are in progress by Blue Coast Ltd. to establish levels of recovery for each element reported but currently the potential recovery for each element has not yet been established. While there is no assurance that all or any of the reported concentrations of metals will be recoverable, Bolivia has a long history of successfully mining and processing similar polymetallic deposits which is well documented in the landmark volume “Yacimientos Metaliferos de Bolivia” by Dr. Osvaldo R. Arce Burgoa, P.Geo. 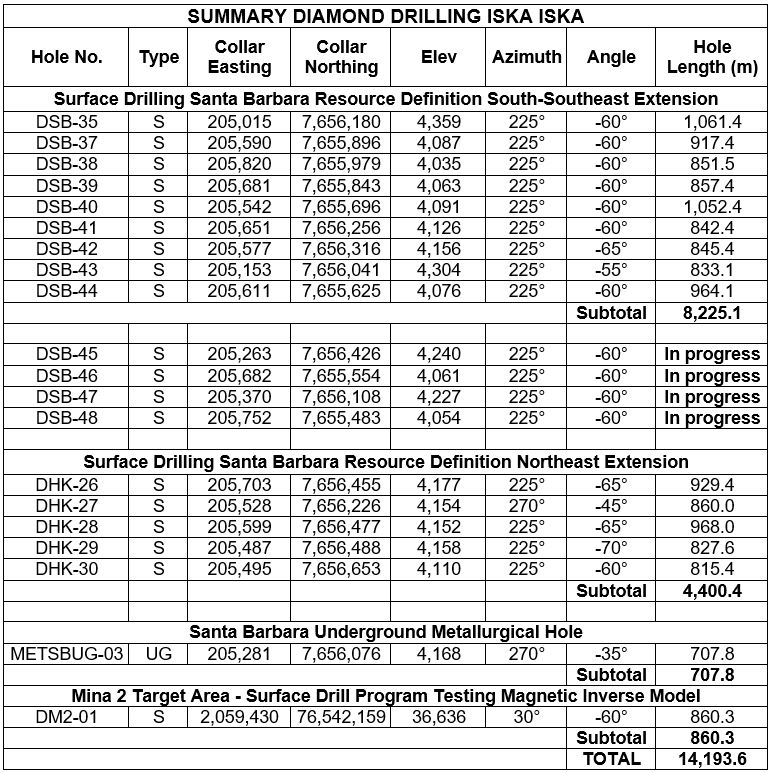 S = Surface UG=Underground; collar coordinates in metres; azimuth and dip in degrees. Total drilling completed since the start of the program on September 20, 2020 is 79,473.6m in 118 drill holes (32 underground drill holes and 86 surface drill holes) including 4 holes in progress.

Eloro is utilizing both ALS and AHK for drill core analysis, both of whom are major international accredited laboratories. Drill samples sent to ALS are prepared in both ALS Bolivia Ltda’s preparation facility in Oruro, Bolivia and the preparation facility operated by AHK in Tupiza with pulps sent to the main ALS Global laboratory in Lima for analysis. More recently Eloro has had ALS send pulps to their laboratory at Galway in Ireland. Eloro employs an industry standard QA/QC program with standards, blanks and duplicates inserted into each batch of samples analyzed with selected check samples sent to a separate accredited laboratory.

Drill core samples sent to AHK Laboratories are prepared in a preparation facility installed and managed by AHK in Tupiza with pulps sent to the AHK laboratory in Lima, Peru. Au and Sn analysis on these samples is done by ALS Bolivia Ltda in Lima. Check samples between ALS and AHK are regularly done as a QA/QC check. AHK is following the same analytical protocols used as with ALS and with the same QA/QC protocols. Turnaround time continues to improve, as laboratories return to more normal staffing levels.

Iska Iska is a major silver-tin polymetallic porphyry-epithermal complex associated with a Miocene possibly collapsed/resurgent caldera, emplaced on Ordovician age rocks with major breccia pipes, dacitic domes and hydrothermal breccias. The caldera is 1.6km by 1.8km in dimension with a vertical extent of at least 1km. Mineralization age is similar to Cerro Rico de Potosi and other major deposits such as San Vicente, Chorolque, Tasna and Tatasi located in the same geological trend.

Since the initial discovery hole, Eloro has released a number of significant drill results in the SBBP and the surrounding mineralized envelope which along with geophysical data has defined an extensive target zone. In its September 20, 2022 press release, the Company reported that new downhole geophysical data has significantly extended the strike length of the high-grade feeder zone at Santa Barbara a further 250m along strike to the south-southeast from existing drilling. The 3D inverse magnetic model which correlates very strongly with the conductive zone suggests that the high-grade feeder zone may extend across the entire caldera for as much as a further 1 km along strike for a total potential strike length of at least 2 km. As reported, the definition drill program has been modified to sectionally drill this potential extension with the intention of defining a major open pittable deposit in the valley of the caldera. As a result, the estimated completion date for the maiden National Instrument 43-101 mineral resource has been pushed back to the end of Q1 2023.

Eloro is an exploration and mine development company with a portfolio of gold and base-metal properties in Bolivia, Peru and Quebec. Eloro has an option to acquire a 99% interest in the highly prospective Iska Iska Property, which can be classified as a polymetallic epithermal-porphyry complex, a significant mineral deposit type in the Potosi Department, in southern Bolivia. A recent NI 43-101 Technical Report on Iska Iska, which was completed by Micon International Limited, is available on Eloro’s website and under its filings on SEDAR. Iska Iska is a road-accessible, royalty-free property. Eloro also owns an 82% interest in the La Victoria Gold/Silver Project, located in the North-Central Mineral Belt of Peru some 50 km south of Barrick’s Lagunas Norte Gold Mine and Pan American Silver’s La Arena Gold Mine.