Eloro Resources Ltd. (TSX-V: ELO; OTCQX: ELRRF; FSE: P2QM) (“Eloro”, or the “Company”) is pleased to announce it has entered into an option agreement (the “Agreement”) to acquire the Mina Casiterita and Mina Hoyada properties (the “Acquisition”) which collectively cover 14.75 km2 southwest and west of the Iska Iska Silver-Tin Polymetallic Project (“Iska Iska”). Artisanal mining in the 1960’s identified high grade tin veins on the Mina Casiterita property that are hosted in intrusive dacite. Production from 1962 to 1964 is reported by the Departamento Nacional de Geología (National Department of Geology) in Bolivia as 69.85 tonnes grading 50.60% Sn. These properties connect with the TUP-3 and TUP-6 claims previously staked by Eloro. The Company has also staked additional claims in the Iska Iska region, as shown in Figure 1. Collectively, the land package to be controlled by Eloro following the Acquisition will total 1,935 quadrants covering 483.75 km2. This includes the Tomave, Khuchu Ingenio and Puna properties, located further north towards Potosi (Figure 1).

The Company’s Bolivian subsidiary, Minera Tupiza S.R.L., entered into the Agreement with the current title holder, subject to finalizing the granting of the mining rights process (the “Title Holder”), for the Mina Casiterita and Mina Hoyada properties. Under the Agreement, the Capital Quotas of the Title Holder will be transferred to Eloro in exchange for a total consideration of 200,000 common shares of Eloro. The transaction is subject to the completion of the terms outlined in the Agreement, together with the receipt of all required regulatory approvals in connection with the issuance of the Eloro common shares.

Eloro recently completed a detailed ground magnetic survey on the Mina Casiterita property, as shown in Figure 2, a map of the Analytic Signal (“ASIG”) of the Total Magnetic Intensity. This survey outlined an extensive, near surface, magnetic intrusive body immediately southwest of Iska Iska. This intrusive hosts the high-grade tin veins previously mined reported to be dacite and is very likely the continuation of the porphyry tin intrusion projected to be below the epithermal Ag-Sn-Zn-Pb mineralization at Iska Iska. (see Eloro’s October 21, 2021 press release). Casiterita provides the opportunity to test this major target by relatively shallow drilling in close proximity to Iska Iska.

The Porco adit from which previously reported channel sampling returned 103m strike length grading 521 g Ag eq/t (including g 117g Ag/t, 1.44 g Au/t, 0.54% Cu and 0.66% Sn) in altered basement sediments (see Eloro’s November 17, 2021 press release and Figure 2) is located near the northeast part of the magnetic anomaly, attesting to the potential strength and high-grade nature of the mineralized system in the area.

Tom Larsen, CEO of Eloro, said: “These properties will add significantly to our land position at Iska Iska and provide an excellent opportunity to test the potential for a major tin deposit with much shallower diamond drilling than on the main Iska Iska discovery. Geological mapping and sampling is in progress on these new properties as well as magnetic surveys. Immediately following the completion of its acquisition, we plan to drill test major targets on the Mina Casiterita property.”

Dr. Bill Pearson, P.Geo. Eloro’s Executive Vice President, Exploration commented: “We are on the last drill hole of the previously announced (see Eloro’s October 18, 2022 press release) definition drill program on Santa Barbara. Work is continuing with Micon International Limited (“Micon”) to complete a detailed domain model for Iska Iska that will form the basis for the inaugural mineral resource estimate targeted for Q1 2023. Gemin, an engineering group based in Lima, Peru is developing parameters for potential open pit and underground mining scenarios for resource definition. Metallurgical testing is continuing with Blue Coast Research. Extensive work has been done with GeologicalAI to develop mineral maps for the scanned core. The calibration of the AI using detailed mineralogical data developed by Nicholas McKay of Blue Coast Research and Dr. Lisa Van Loon of LisaCan Analytical Solutions, along with on-site checking of drill core by Eloro geological personnel under the supervision of Dr. Osvaldo Arce, P.Geo. is near completion. The AI domain analysis will be used in conjunction with geophysical models developed by Eloro’s Chief Geophysicist Dr. Chris Hale, P.Geo. and geological models prepared by the Eloro geological team, to develop the final domain model for mineral resource estimation. Mr. Charley Murahwi, P.Geo. of Micon completed his site visit to Iska Iska in October 2022. Assay results are pending on 16,642m of drilling in 20 holes.”

Iska Iska is a major silver-tin polymetallic porphyry-epithermal complex associated with a Miocene possibly collapsed/resurgent caldera, emplaced on Ordovician age rocks with major breccia pipes, dacitic domes and hydrothermal breccias. The caldera is 1.6km by 1.8km in dimension with a vertical extent of at least 1km. Mineralization age is similar to Cerro Rico de Potosí and other major deposits such as San Vicente, Chorolque, Tasna and Tatasi located in the same geological trend.

Since the initial discovery hole, Eloro has released a number of significant drill results in the SBBP and the surrounding mineralized envelope which along with geophysical data has defined an extensive target zone. In its September 20, 2022 press release, the Company reported that new downhole geophysical data has significantly extended the strike length of the high-grade feeder zone at Santa Barbara a further 250m along strike to the south-southeast from existing drilling. The 3D inverse magnetic model which correlates very strongly with the conductive zone suggests that the high-grade feeder zone may extend across the entire caldera for as much as a further 1 km along strike for a total potential strike length of at least 2 km. As reported, the definition drill program has been modified to sectionally drill this potential extension with the intention of defining a major open pittable deposit in the valley of the caldera. As a result, the estimated completion date for the maiden National Instrument 43-101 mineral resource has been pushed back to the end of Q1 2023.

Eloro is an exploration and mine development company with a portfolio of gold and base-metal properties in Bolivia, Peru and Quebec. Eloro has an option to acquire a 99% interest in the highly prospective Iska Iska Property, which can be classified as a polymetallic epithermal-porphyry complex, a significant mineral deposit type in the Potosi Department, in southern Bolivia. A recent NI 43-101 Technical Report on Iska Iska, which was completed by Micon International Limited, is available on Eloro’s website and under its filings on SEDAR. Iska Iska is a road-accessible, royalty-free property. Eloro also owns an 82% interest in the La Victoria Gold/Silver Project, located in the North-Central Mineral Belt of Peru some 50 km south of Barrick’s Lagunas Norte Gold Mine and Pan American Silver’s La Arena Gold Mine.

Figure 1: Location of Properties to be Acquired by Eloro in the Iska Iska area. 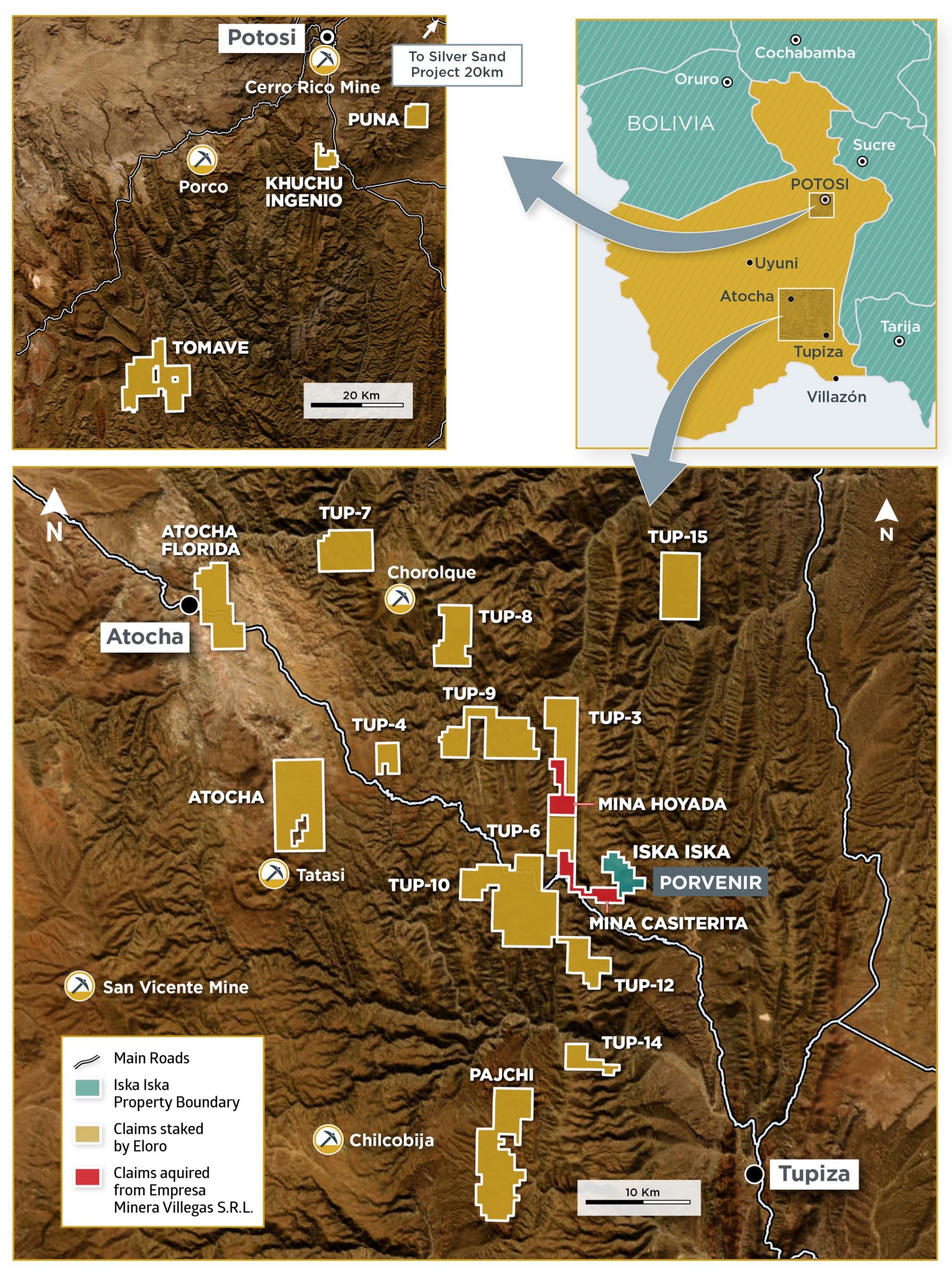 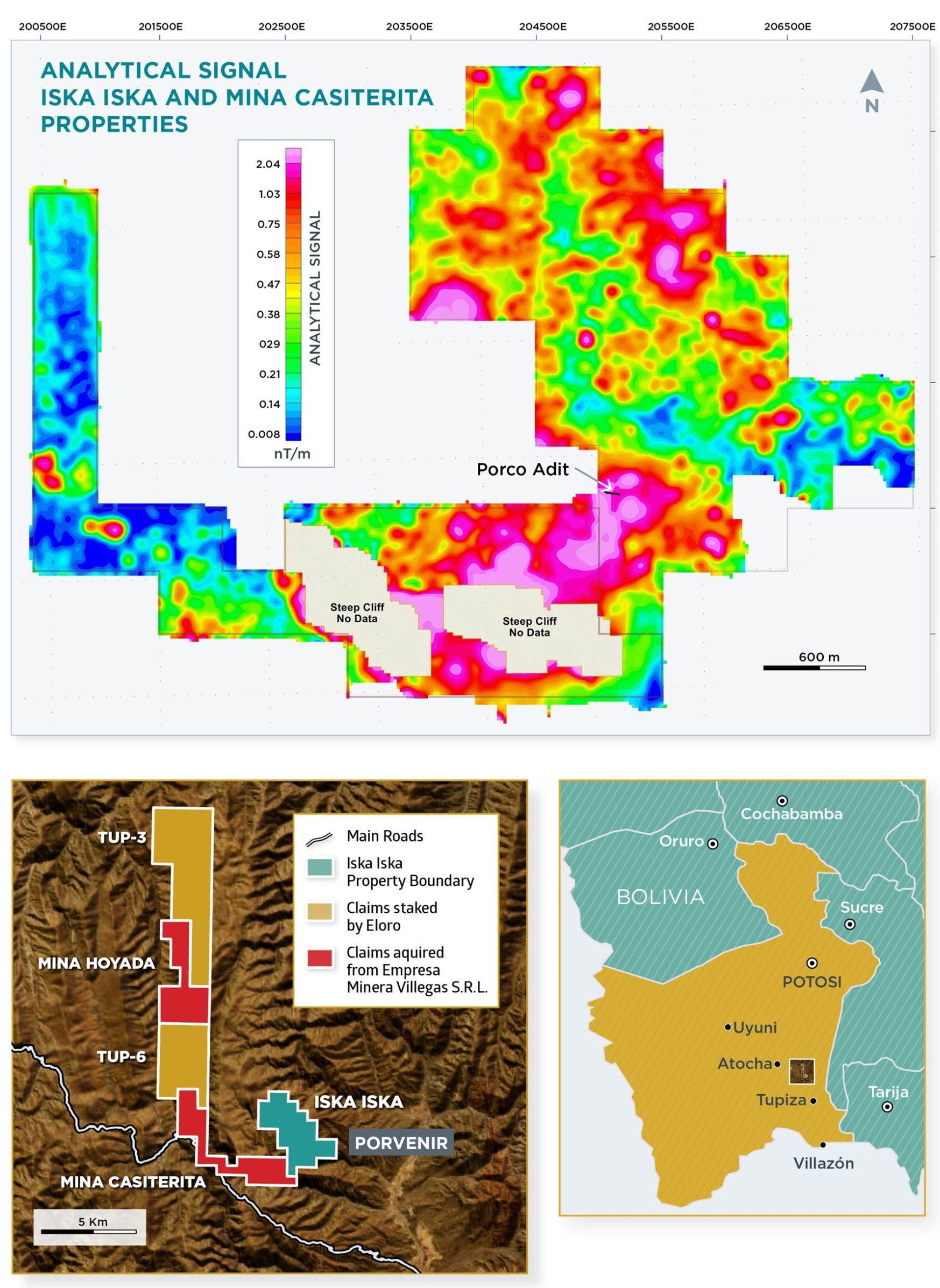