Endurance Gold CorporationÂ (EDG – TSX.V)Â (the “Company“)Â is pleased to report an update on the diamond drilling program at the Reliance Gold Property (the “Property“) in southern British Columbia. The Property is located 4 kilometres (“km“) east of the village of Gold Bridge with year-round road access, and 10 km north of the historic Bralorne-Pioneer Gold Mining Camp which has produced over 4 million ounces of gold.

The Company’s has now completed a total of 4,329 metres (“m“) with a total of twenty-two (22) diamond drill holes at the Eagle and Imperial Zones. Â This final meterage exceeds the planned 4,000 m program announced in August 2021.

Eagle Area TargetsÂ – Based on surface exploration activity in 2021, three significant targets were identified in the Eagle Area. They include theÂ Eagle Zone, theÂ Eagle South Target, and theÂ Upper Eagle Target.Â Â New outcrop exposures and preliminary interpretation indicate that the three target areas are potentially contiguous with at least one interpreted fault offsetting the Eagle and Eagle South Zones.Â  The description of the Eagle Area Targets can be found in theÂ press release of October 28, 2021Â and the location of the 2021 drill holes atÂ Figure 2 – Eagle Area Targets – 2021 Diamond Drill PlanÂ .

Eagle ZoneÂ – Based on the initial core logging, all eleven (11) holes at the Eagle Zone have intersected brecciated siltstones and basalts exhibiting strong sericite-ankerite alteration healed with 1-3% pyrite veinlets over intervals up to 100 m in core length. Lithological contacts are often sheared and healed with silicification and more localized quartz-pyrite-arsenopyrite-stibnite sulphidation and veining with some of these zones observed up to 25 metres in core length.

The Eagle Zone is interpreted as an intensely altered shallow thirty-five degree southwest dipping, northwest striking brittle shear breccia structure with mineralization consisting of pyrite-pyrrhotite-arsenopyrite-stibnite replacement and silicification of intensely ankerite-sericite-clay altered mafic volcanic and sediments. Towards the southeast there is an observed increase in altered fine-grained sediment host rock and the Eagle Zone is interpreted to dip into the Eagle South Zone.

Eagle South TargetÂ -Five holes in the current program tested this target which immediately adjoins the Eagle Zone. On surface this consists of a 50 to 100 m wide ankerite-sericite-sulphide alteration zone within a melange of intensely altered volcanics, sediments and possibly chert (see press release of October 28, 2021). Â In diamond drill core extensive sulphide mineralized quartz breccia is observed and interpreted to be either chert or an early pervasive silicification event that has been subject to brittle deformation with later sulphide introduction into the breccia matrix. Some more restricted portions of these quartz-breccia zones have arsenopyrite and/or stibnite as a sulphide component over widths of up to 25 m. Â The estimated true width and dip of the observed quartz breccia in this area has not yet been determined.Â  A photographic compilation of a wide sulphide altered interval and selected highlights of the breccia textures from DDH21-20 is appended below as Figure 3 and Figure 4. There has been no drill testing of the Upper Eagle target during the current drill program.

Imperial Zone DrillingÂ – Four (4) diamond drill holes were completed at the Imperial Zone to get a complete structural, alteration and mineralized section along strike and at depth.Â Â As reported on September 27, 2021Â three holes were drilled at -45 degrees on different azimuths at approximately 100 m below surface along about 100 m of strike. A fourth drill hole at minus 82 degrees also intersected the Imperial Zone at about 203 m depth at about 150 m step-out down-dip from the intersection elevation of the first three diamond drill holes. A plan map location of these holes is included with the prior release. The interpreted Imperial Zone iron carbonate-sericite alteration, sulphide alteration, silicification and breccia in strongly altered mafic volcanics has been observed in intervals between 10 m and 25 m in each of the four holes with continuity at the same structural and stratigraphic location.Â  In addition two (2) holes tested the potential shallow extensions to the southeast of the Imperial Zone and the Imperial North Zone.

The original planned drill testing at the Crown Zone has been deferred until a future drill program.

The 2020 and 2021 work program is supervised by Darren O’Brien, P.Geo., an independent consultant and qualified person as defined in National Instrument 43-101.Â  Mr. O’Brien has reviewed and approved this news release.

Neither the TSX Venture Exchange nor its Regulation Services Provider (as that term is defined in the policies of the TSX Venture Exchange) accepts responsibility for the adequacy or accuracy of this news release.Â  This news release may contain forward looking statements based on assumptions and judgments of management regarding future events or results that may prove to be inaccurate as a result of factors beyond its control, and actual results may differ materially from the expected results. 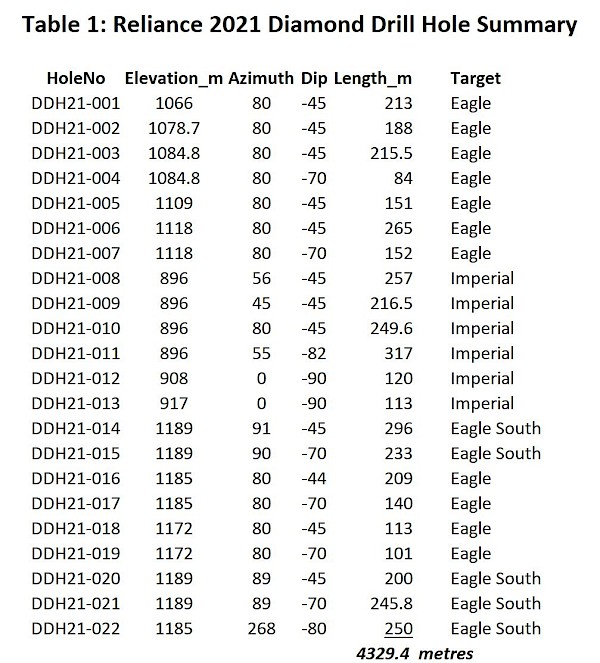 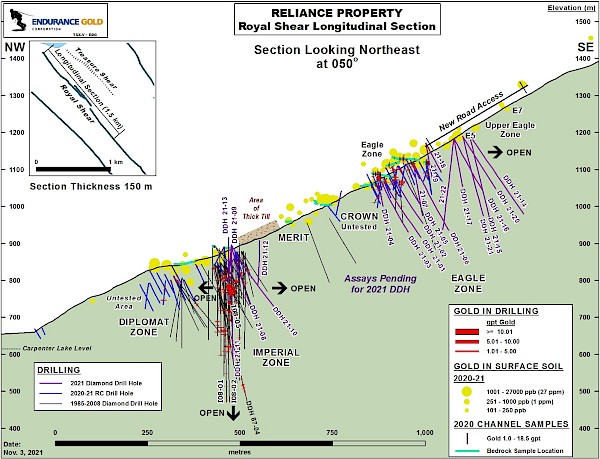 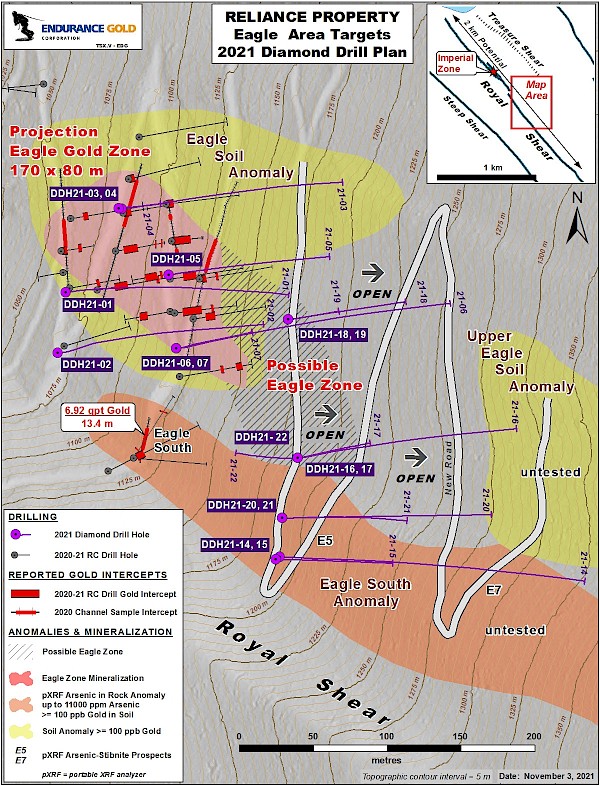 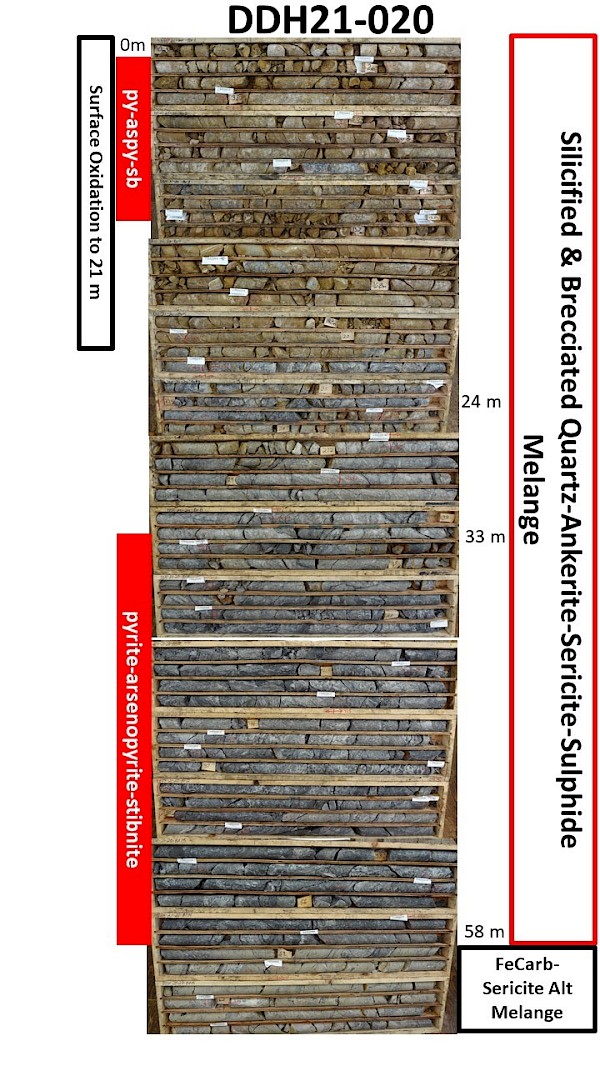 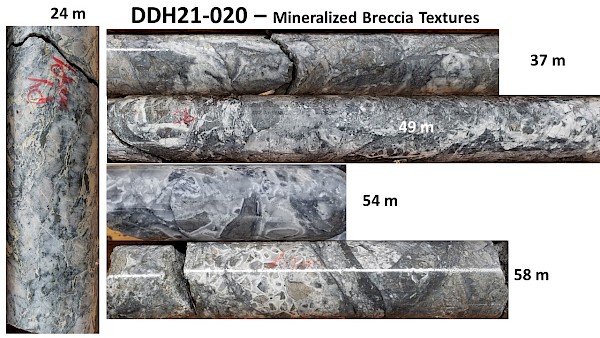