Including High-Grade Interval of 9.69 gpt Gold over 9.1 metres

Endurance Gold Corporation (EDG – TSX.V) (the “Company”) is pleased to report additional assay results from the channel sampling program completed at the Eagle Zone on the Reliance Gold Property (the “Property”) in southern British Columbia. The Property is located 4 kilometres (“km”) east of the village of Gold Bridge with year-round road access, and 10 km north of the historic Bralorne-Pioneer Gold Mining Camp which has produced over 4 million ounces of gold.  New channel sample results have returned continuous intervals of high-grade gold and antimony mineralization along three outcrop exposures.  Channel sampling results from the Eagle Zone are reported in metres (“m”) in the table below with weighted average gold as grams per tonne (“gpt”) and percent antimony (“Sb %”): 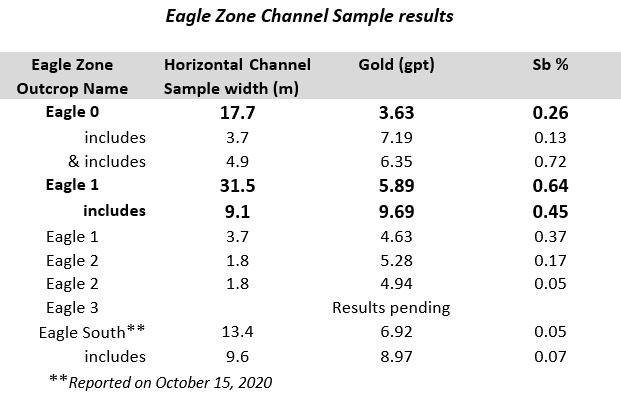 Interpretation of these Eagle Zone results have identified a 110 m by up to 40 m wide east-west trending area with gold-rich oxidized hematitic shearing and quartz-stibnite veining which is significantly elevated in gold. The Eagle Zone was identified in outcrop along historic road cuts that exhibit iron-carbonate altered and sheared mafic volcanics in four locations within the footwall of the Royal Shear.  Encouraging grab samples up to 19.2 gpt gold were reported by the Company in its Press Release dated September 9, 2020.   A map showing the location of the Eagle channel samples with gold grades and the interpreted mineralized trends is appended below or available on the Company website. A tabulated summary of the individual channel sample values for the Eagle 0 and Eagle 1 exposures are appended to this release. Aside from these sampled roads cuts, the Eagle Zone has no bedrock exposure due to talus cover overlain by a blanket of late volcanic tephra-ash.

The reported 31.5 m Eagle 1 channel sample is approximately 135 m north of the Eagle South Zone which returned 6.92 gpt gold over 13.4 m with a higher grade portion of 8.9 gpt gold over 9.6 m (see Press Release dated October 15, 2020).  Further work is required to determine how these zones relate to each other.

At the Eagle Zone the majority of the gold mineralization is associated with strong iron-carbonate alteration including silicification within brittle-ductile shearing in the footwall of the Royal Shear. The Royal Shear is a multi-strand reverse fault striking northwest (325 degrees) and steeply dipping to the southwest. Ankerite-quartz breccia zones are well developed within the various strands of the Royal Shear and may contain pyrite, arsenopyrite and stibnite, which are oxidized near surface. Secondary syn-mineral faults or fractures striking northerly (020 degrees) and steeply west dipping are healed with quartz-stibnite veins and exhibit horizontal strike slip movement with minor displacement. An example at the Eagle 1 outcrop is a 1.2 m wide quartz-stibnite vein that appears to form the southern boundary of the significant gold mineralization.  Other less dominant examples have been mapped at Eagle 0 and Eagle 2. The confluence of these 325 and 020 structures may form approximately east-west trending dilatant zones controlling gold deposition within the different brittle-ductile strands of the Royal Shear.

On the Royal Shear historic road cuts with alteration have had systematic channel sampling completed and all samples have been submitted for gold and multielement analysis.  Results of the channel sampling from the remaining portion of the Eagle Zone (at Eagle 3), Imperial, Crown and Merit Zones will be reported as received through November.

The company has now received a drill permit and is currently planning a reverse circulation drill program to be initiated in November (see Press Release dated October 22, 2020).  The Company is proud of its efforts to engage and inform the local communities including the First Nation communities. Prior to mobilization for this drilling program, engagement and dialogue will continue with the affected First Nation communities to determine how we may be able to dovetail opportunities for mutually beneficial participation.

The Company acquired an option to earn a 100% interest in the Property in September 2019.  The Property was previously explored with trenching and diamond drilling from 1985 through 2008. The last program of drilling in 2008 targeted the Imperial Zone and returned highlight drill intersection widths including 13.30 gpt gold over 4.20 m (est 1.8m true width). 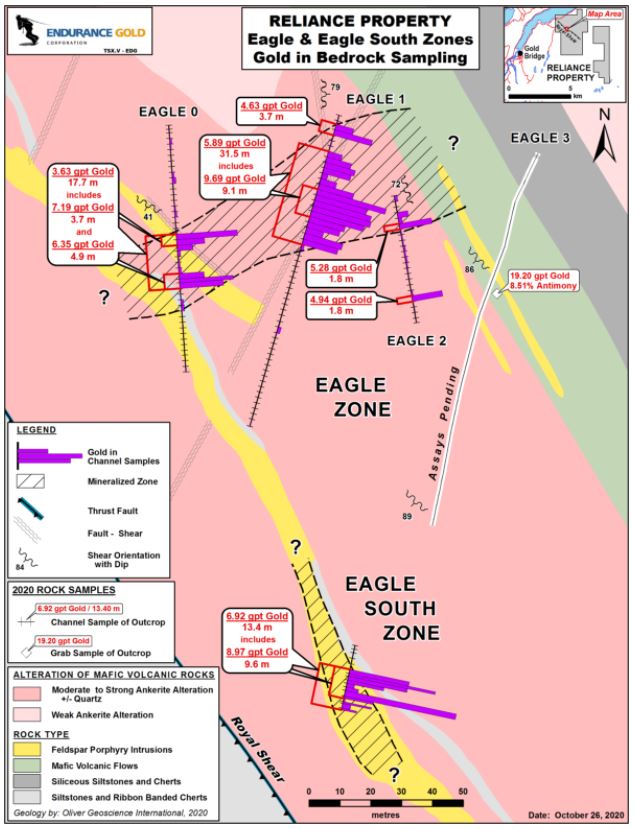 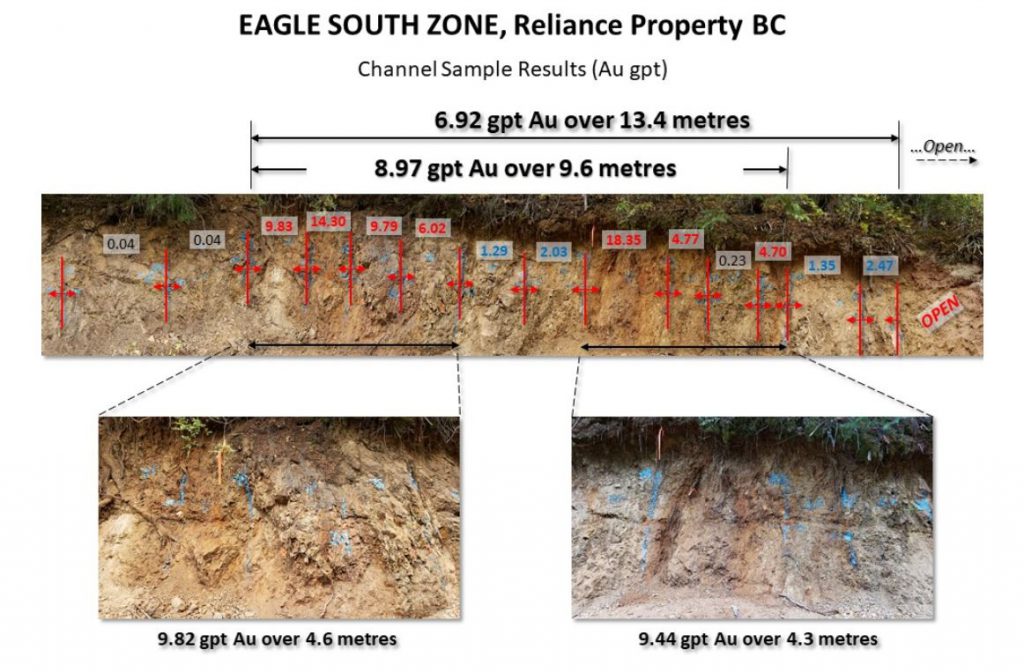 Channel samples were collected by a geologist and assistant using a hand-held electric hammer “demolition” chisel which extracts a continuous channel in outcrop horizontally across a pre-measured and marked outcrop face. In 2020 all rock and channel samples were submitted to ALS Global in North Vancouver, BC, an ISO/IEC 17025:2017 accredited laboratory, where they were crushed to 70% <2 mm then up to 250 gram pulverized to <75 microns. Samples were then submitted for four-acid digestion and analyzed for 48 element ICP-MS (ME-MS61) and gold 30g FA ICP-AES finish (AU-ICP21). Over limit samples returning greater than 10 ppm gold were re-analyzed by Au-GRA21 methodology and over limit antimony returning greater than 10,000 ppm Sb were re-analyzed by Sb-AA08 methodology. Grab samples are selective by nature and are unlikely to represent average grades on the property or within the target areas.  The work program was supervised by Darren O’Brien, P.Geo., an independent consultant and qualified person as defined in National Instrument 43-101.  Mr. O’Brien has reviewed and approved this news release.

Scorpio Gold Obtains US Government approval for the purchase of Kinross properties in Manhattan, Nevada