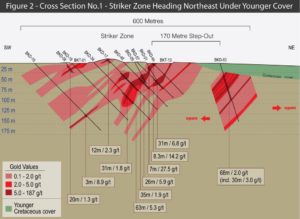 Erdene Resource Development Corp. [ERD-TSX] has released the second set of results from continuing drilling at its 100%-owned, high-grade Bayan Khundii gold project in southwest Mongolia. Results confirm a significant new discovery under shallow cover, 170 metres north of the Striker Zone. In addition, drilling continues to support continuity of the high-grade mineralization within the Striker Zone. Results are pending for 12 holes.

The 2016 third quarter/fourth quarter drilling program includes 28 holes drilled since September 5, 2016, totaling 3,518 metres. A total of 73 holes have been completed, totaling 8,097 metres, since the initial holes were drilled in October 2015. Refer to company press release for complete drill results.