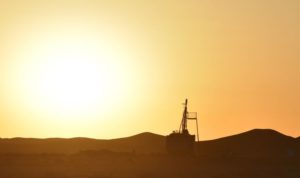 “Our initial phase of 2018 drilling in the Midfield North Zone was very successful in extending the gold mineralized zone, improving the continuity of the high-grade mineralization and increasing our understanding of the controlling structures and associated feeder zones,” said Peter Akerley, Erdene’s President and CEO.  “We are continuing to target extensions to high-grade zones in other areas of Bayan Khundii, and following this program will drill test more distal targets at our neighboring Altan Arrow, Khundii North and new Ulaan project.”

Today’s results are for the first six holes (BKD-235 to BKD-240), totalling 1,423 metres, which were completed at the North Midfield Zone.  Holes BKD-235 to BKD-238 were drilled to test continuity and potential extensions of the high-grade mineralization in the North Midfield target area.  Hole BKD-236 was also drilled to test the interpreted controlling structure on the western boundary of the gold mineralization and a sub-set of gold-bearing, north-south trending veins, approximately perpendicular to the main trend of mineralization (azimuth of 108 degrees).  Holes BKD-239 and BKD-240 were step-out holes, located near previously completed hole BKD-232 (Q1-2018) that returned 36.6 metres of 5.6 g/t gold.

Table 1 below includes drill result highlights of these six holes, followed by a description of results.  For reference see the attached plan maps and cross-section.

(1) Reported intervals are not true width. At this time, there is insufficient data with respect to the shape of the mineralized system to calculate true orientations in space. They represent drill intersection widths from holes drilled at a dip of -45 to -57 degrees and oriented to the north-northeast, with the exception of BKD-236, which was drilled at a 108 degree azimuth. The Bayan Khundii mineralization is interpreted to be moderately dipping (approximately 40 to 50 degrees to the southwest).

Figures accompanying this announcement are available below

The six drill holes discussed herein were designed as follow-up drilling to establish continuity and potential extensions of the high-grade mineralization, along with the testing of additional structural targets within the North Midfield Zone discovered in mid-2017.

The named zones within the Bayan Khundii prospect (Striker, Midfield and North Midfield) are the most prominent of multiple, relatively distinct gold mineralized zones that potentially developed around individual feeder structures, which have resulted in very high-grade gold centered around low sulfidation epithermal, quartz-adularia veins and breccias. Considering todays results, and defined by a 0.2 g/t gold mineralized shell, North Midfield is contained within a 150 metre thick package of intensely altered Devonian volcanics within which a high-grade quartz adularia vein, breccia system, continues approximately 250 metres along its southeast strike, over a distance of 150 metres down-dip to the southwest.  Today’s holes were collared within a 150 by 90 metre area in the western portion of the North Midfield target area (see attached plan map).

A recent independent structural analysis of the Bayan Khundii project was considered in the planning of the current drill program.  Results of that study suggest mineralization is related to bounding faults of a relay ramp structure where a series of southwest-dipping structures have been intersected by a deep seated fault, allowing gold-bearing fluids to migrate upward along these structures, with the main feeder zones occupying the intersections of the bounding faults and major structure.  This Q2 drill program is designed to test these structural targets in an effort to extend and develop continuity within these high-grade zones where previous drilling (BKD-231, Q1-2018) has returned values up to 2,200 g/t gold over 1 metre within 14 metres of 158 g/t gold.

The current drill program has provided evidence to support the presence of feeder zones in the vicinity of the western boundary of the North Midfield Zone.  This includes multi-stage, brecciated, dark chalcedony-quartz-adularia zones in the westernmost holes (BKD-236 and BKD-237) locally with abundant visible gold intersected, including up to 2 metres of 33.8 g/t gold.  Moving east within the North Midfield Zone, along the southwest-dipping structures, the gold-bearing zones are characterized by sugary-textured, recrystallized comb-textured quartz veins, as observed in hole BKD-238 from 152 to 170 metre depth, which averaged 21.6 g/t gold with abundant visible gold, and hole BKD-239 from 146 to 147 metre depth, which averaged 54.8 g/t gold within quartz-hematite-green illite veins, again with abundant, fine-grained visible gold.  The results of this program will both expand and provide higher confidence to the North Midfield Zone in regards to the resource reporting that is scheduled for Q3-2018, as well as provide guidance for future targeting within and distal to the Bayan Khundii gold system.

The remainder of the Bayan Khundii drill program (approximately 3,000 metres; 15 holes) will focus on completing closer-spaced drilling in the North Midfield, Midfield, Striker and West Striker zones to expand and establish stronger continuity of some of the very high-grade domains in order to provide higher levels of confidence in domain definition and overall gold grades for incorporation in the Company’s anticipated Q3-2018 maiden mineral resource estimate at Bayan Khundii.

Over the past several years Erdene has discovered a new gold district (“The Khundii Gold District”) in southwest Mongolia that includes seven targets, two of which are considered significant prospects for development, and which are being advanced toward a global mineral resource estimate in 2018; Bayan Khundii and Altan Nar.

During 2018, in addition to drilling at Bayan Khundii, the Company intends to complete additional drilling at its early-stage Altan Arrow gold-silver project, 3.5 kilometres north of Bayan Khundii, to follow-up on high-grade results intersected from reconnaissance drilling in Q4-2017.  This drilling included hole AAD-12 which intersected 70 g/t gold over 2 metres, and drilling of a new target area 300 metres west which returned 39 g/t gold over 1 metre, near-surface (hole AAD-11).

The Company will also complete follow-up, surface exploration work at its Khundii North gold prospect, 2.5 kilometres east of Altan Arrow, where gold-in-soil anomalism has now been traced over 1 kilometre, containing areas of quartz stockwork, chalcedonic quartz with hematite breccia clasts that have returned up to 22 g/t gold from initial rock chip sampling.  Several areas of strong illite alteration, resembling the alteration at the Bayan Khundii project, located 3.5 kilometres to the southwest, were noted along a major northeast-trending structure to the northwest of the main quartz breccia zone.

In addition to the Company’s 100%-owned gold projects, it has recently acquired a 51% interest, with the option to acquire up to 100%, in the Ulaan license, a 1,780 hectare exploration property, located immediately west of its Bayan Khundii license.  The license has no history of trenching or drilling, and is host to a very large, 3-kilometre diameter, intense alteration zone with characteristics thought to be related to a porphyry complex at depth.  The Company intends to complete a maiden drill program at Ulaan in late Q2-2018.

Through its Alliance with Teck Resources Limited, Erdene also intends to continue to assess regional opportunities for porphyry and porphyry-related mineralization within the larger Edren Terrane and intends to pursue acquisitions as opportunities arise in the Alliance’s area of interest in southwest Mongolia. Erdene’s Bayan Khundii, Altan Nar, Altan Arrow, Ulaan, Khuvyn Khar and Zuun Mod properties are excluded from the Teck Alliance areas of interest.

Michael MacDonald, P.Geo. (Nova Scotia), Vice President Exploration for Erdene, is the Qualified Person as that term is defined in National Instrument 43-101 and has reviewed and approved the technical information contained in this news release. All samples have been assayed at SGS Laboratory in Ulaanbaatar, Mongolia. In addition to internal checks by SGS Laboratory, the Company incorporates a QA/QC sample protocol utilizing prepared standards and blanks.  All samples undergo standard fire assay analysis for gold and ICP-OES (Inductively Coupled Plasma Optical Emission Spectroscopy) analysis for 33 additional elements.  For samples that initially return a grade greater than 5 g/t gold, additional screen-metallic gold analysis is carried out which provides a weighted average gold grade from fire assay analysis of the entire +75 micron fraction and three 30-gram samples of the -75 micron fraction for a 500 gram sample.

Erdene’s drill core sampling protocol consisted of collection of samples over 1 or 2 m intervals (depending on the lithology and style of mineralization) over the entire length of the drill hole, excluding minor post-mineral lithologies and un-mineralized granitoids. Sample intervals were based on meterage, not geological controls or mineralization. All drill core was cut in half with a diamond saw, with half of the core placed in sample bags and the remaining half securely retained in core boxes at Erdene’s Bayan Khundii exploration camp. All samples were organized into batches of 30 including a commercially prepared standard, blank and either a field duplicate, consisting of two, quarter-core intervals, or a laboratory duplicate. Sample batches were periodically shipped directly to SGS in Ulaanbaatar via Erdene’s logistical contractor, Monrud Co. Ltd.