These three northern European countries along with Iceland and Denmark, are known as the Nordic countries. All have Scandinavian roots and geographically speaking, the Scandinavian peninsula is the area shared by Norway, Sweden, and a part of northern Finland. The French invented the term le pays Nordiques or “Nordic Countries” and this has become a common term to bring together the countries under the same umbrella.

Finland, Sweden and Norway have a long history of mineral exploration, mining and metal production.

Finland’s mining industry is composed of the extraction and processing of metallic minerals and industrial minerals as well as steel production. The country has large deposits of chromite, cobalt, copper, iron, lead, nickel, zinc, limestone and talc. Finland is the leading talc producer in Europe and the ninth-ranked talc producer in the world, accounting for 4% of world production. And up until 2015 it was the leading peat producer in the world, accounting for an estimated 26% of world production. (Peat is a spongy material formed by the partial decomposition of organic matter, primarily plant material, in wetlands such as swamps, muskegs, bogs, fens, and moors.) Its use as a source of fuel has been in decline since then – peatlands sequester more carbon than all other vegetation types in the world combined and so peat is now considered criticalÂ for preventing and mitigating the effects ofÂ anthropogenic global warming.

Sweden is the EU’s most prolific nation and plays an important role in ensuring the EU’s security of supply of metals and minerals. Today, Sweden accounts for around 93 percent of all iron ore produced in Europe and is a leading producer of other base metals. Sweden has a history of mining and metal refining stretching back more than a thousand years. Most mines are located in Sweden’s three ore regions, Norrbotten, SkelleftefÃ¤ltet and Bergslagen. At the beginning of the 20th century, Sweden had about 250 mines but today, the number has decreased to 12 active metal mines, while total production has more than doubled. Many Swedish engineering companies have their origins in the mining industry and are today world leaders in mining equipment and mining technology. Besides metal mines, there is also major industrial mineral production.

Norway has vast reserves of petroleum, nickel, natural gas, iron ore, coal and titanium production accounting for 6% of the total world production of the metal. Globally, it ranks fifth in the production of natural gas and second in export of natural gas. The country also has a rich history of copper mining, with production in the key LÃ¸kken and RÃ¸ros districts commencing in the mid-1600’s and continuing until the mid-1980’s, when low copper prices forced the closure of the underground mining operations. Little modern systematic exploration has been undertaken in these former mining districts since then.

Norsk Bergindustri (Norwegian Mineral Industry), the national mining association in Norway, announced recently that it will adopt the Towards Sustainable Mining (TSM) initiative, a corporate social responsibility program developed by the Mining Association of Canada (MAC) to improve environmental and social practices in the mining industry. TSMÂ requires mining companies to annually assess their facilities’ performance across eight areas, including energy use and greenhouse gas emissions management, Indigenous and community outreach, safety and health, and biodiversity conservation. MAC and its members launched TSM in 2004 to enable mining companies to meet society’s needs for minerals, metals and energy products in the most socially, economically and environmentally responsible way. Implementation of the program is mandatory for all MAC members’ Canadian operations, but many voluntarily apply it to their international sites. 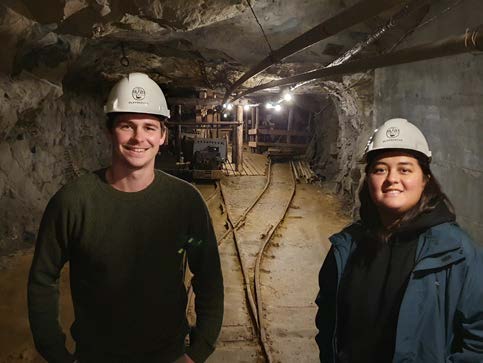 There are a few Canadian miners active in the Nordic countries. One is Capella Minerals Ltd. [TSXV: CMIL – OTCQB: CMILF – FRA: N7D2], a Canadian exploration and development company with properties located in both Canada and Scandinavia. Capella holds an initial 70% interest in the Katajavaara and Aakenus gold-copper projects in the highly prospective Central Lapland Greenstone Belt of northern Finland. Capella’s portfolio also includes three high-grade copper projects in central Norway (the resource-stage HessjÃ¸gruva Project and drill-stage KjÃ¸li and LÃ¸kken Projects),

Capella recently announced the acquisition of a 100% interest in the advanced-stage HessjÃ¸gruva copper-zinc-cobalt (“Cu-Zn-Co”) project from local company HessjÃ¸gruva AS on April 6, 2022. Â The HessjÃ¸gruva project is located approximately 20km SW of the Company’s 100%-owned KjÃ¸li Cu-Zn-Co massive sulfide (“VMS”) and project represents a district-scale land position in the northern part of the RÃ¸ros copper mining district, of central Norway.

Capella’s LÃ¸kken copper-rich massive sulfide (“VMS”) project is located approximately 50km SW of the regional centre of Trondheim in central Norway. The LÃ¸kken claim block covers an area of 210 square kilometres (21,000 Ha) and surrounds the former LÃ¸kken underground copper mine which closed in 1987 in response to low metals prices. The former LÃ¸kken mine is one of the largest ophiolite-hosted Cyprus-type VMS deposits (by tonnage) to have been developed in the world, producing an estimated 24Mt @ 2.3% Cu and 1.8% Zn (plus silver and gold credits).